At the movies, John Travolta used to be a valuable commodity—a good actor, versatile, talented and resourceful. Why he has spent most of his adult career dedicating his life to making rotten movies nobody wants to see is anybody’s guess. It took three directors to get his latest, a dog called The Poison Rose,  completed, and not one of them got it right.

Travolta plays Carson Philips, a washed-up Hollywood private eye covering routine cheating wives, missing persons, and other similarly cliched cases from old film noirs about sleuths called Philip Marlowe, Bulldog Drummond and Philo Vance. He rarely goes out of town on a case, mainly because he can’t afford the plane fare, but when a client hires him to find her missing aunt in Galveston, Texas, he can’t resist the opportunity to visit his old hometown.

He’s been gone for 20 years, but some people still remember him from the good old days when he was the town’s star quarterback. All of them have a get-even reason to run him out of town. Everyone has a different accent, not one of which sounds authentically Texan. Making matters doubly implausible, Galveston is played by Savannah, Georgia (although a couple of scenes were shot in Rome).

The missing person he’s trying to locate is an old lady whom he believes is held against her will in a sanitarium run by a pulchritudinous replica of what used to be Brendan Fraser. He plays a crooked doctor who runs a methadone lab and kills off half the town with bad drugs. The other folks Travolta’s character runs into during his search for clues include Morgan Freeman, who owns a bar; Famke Janssen, looking sexy and bored as Jayne Hunt, the old girlfriend he dumped decades earlier; Robert Patrick as the sheriff; and Ella Bleu Travolta, the star’s daughter, as Jayne’s daughter Becky, who is married to the town’s newest football hero.

When the new quarterback is mysteriously murdered and his wife emerges as the chief suspect, Carson abandons the case about the missing old lady and turns his attention to the dead athlete, whose wife Becky  turns out to be Carson’s own daughter Jayne never told him about. The plot of this dull, aimless, motion-free whodunit plods on, intermittently laced with a line screenwriter Richard Salvatore, adapting his own novel, considers clever. Carson, to his old girlfriend Jayne: “You’re hard as nails.” Jayne: “Nails get rusty.”

Nothing makes much sense here, including the title. There are no poison roses, although The Poison Rose would have been aided immensely by even one poison daffodil. 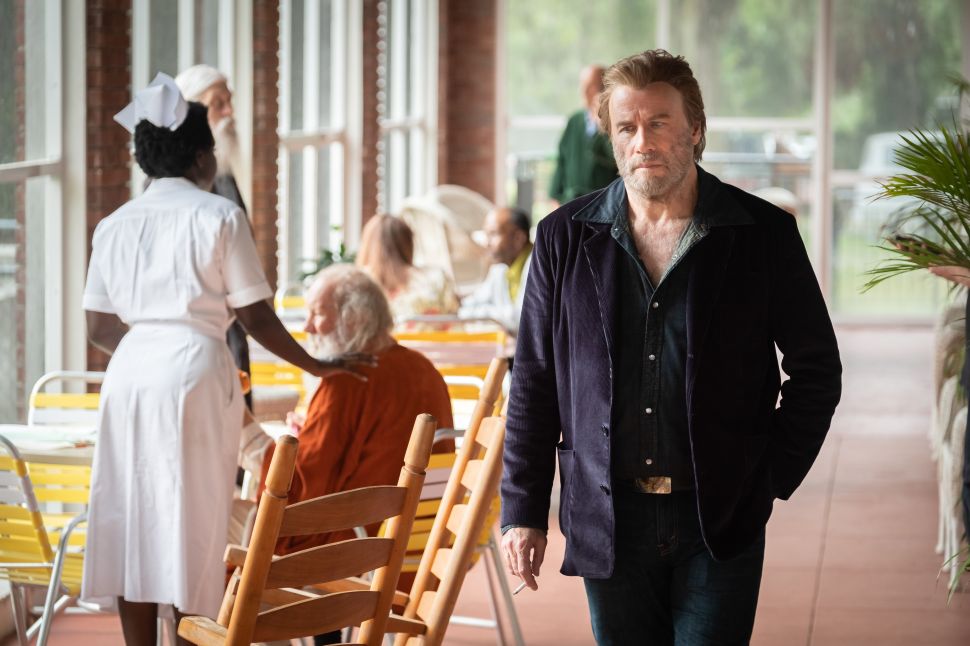