In 1980s-set The Souvenir, young film student Julie (Honor Swinton Byrne) is planning to make her first feature about a boy from the then dying shipbuilding town of Sunderland who has an uncommon attachment to his mother. The title page for the project, which seems about as far as Julie gets with the script, reads Mother: A Son’s Story—one of the movie’s many bits of subtle commentary about gender and filmmaking.

Neither her professors nor her boyfriend, Anthony (Tom Burke, who stars in the BBC series C.B. Strike, based on J.K Rowling’s detective novels), are entirely sold on the idea. Julie is a child of privilege living in a posh Knightsbridge flat. While they are close, she is not overly entangled with her mother (Tilda Swinton, Swinton Byrne’s real mom), who pays the rent and sends extra money whenever Julie needs it. Shouldn’t she be making a film borne out of her lived experience rather than her notion of what life might be like for the hardscrabble residents in far-off Northern England?

It’s safe to say that writer-director Joanna Hogg, the remarkable British filmmaker who has become something of a sensation within film critic circles since making her feature film debut with 2007’s Unrelated, took these early admonitions to heart.

The Souvenir is about as autobiographical as a fiction film can be. In it, Hogg meticulously recreates her own formative years in London in the ’80s down to the smallest detail. (The gold gilt bed Julie sleeps on is the same one Hogg owned at the time). While Hogg chooses to build the story around the intense relationship she shared with an odd and secretive older man, every frame of her movie is filled with discussion and consideration of the process of filmmaking.

As a result, The Souvenir, Hogg’s fourth film, is an extraordinary rumination on memory and privilege while also being one of the most incisive movies ever to directly address—in moral, philosophical and personal terms—what it means to be a filmmaker. In its own remarkably nuanced and deeply private way, The Souvenir goes further than any recent film to address the single question that has plagued cinema since its invention and is central to how we discuss it today: why don’t more films directed by women get made?

Fittingly for a movie whose very subject is discovering one’s voice and purpose, Hogg eschews some of the rigorous formalism that are the earmarks her earlier work—all of which is available to stream on the new Criterion Channel.

While in her past films Hogg’s camera barely moves and tends to keep a safe distance, early on in The Souvenir (which takes its name from an eighteenth-century French painting that plays a key role in the film and in Hogg’s real life) Hogg swoops her camera around Julie’s flat as if she is looking for something in the apartment that she lost years before. Music, scantly used in Hogg’s past work, is also prominently featured in the film as a way to illustrate both the lead characters’ inner lives and the distance between them. (She likes New Wave; he listens to opera.)

These two lead performances both standout for their precision and vitality. Making her film debut, Swinton Byrne perfectly captures Julie’s (and undoubtedly the young Hogg’s) seemingly incongruous mix of shy naïveté and stubborn sense of self. Meanwhile, Burke plays her love interest dandy with a posh priggishness that just barely masks his vulnerability.

This is not a woman who is simply going to be swallowed up by a bright and talkative guy, and Hogg and her actors make a point to show that their relationship, while often quite toxic, was founded on creativity and respect. (Early on he seems to win her over with his trenchant analysis of the films of Powell and Pressburger.)

As anyone familiar with her work can attest, Hogg’s films move at their own languid pace; they demand a level of patience that is in short supply these days, but they reward it greatly. Her chosen milieu is the British upper-middle creative class (the East Anglian painter and linocut artist James Dodds plays Anthony’s father) and it’s not exactly a trendy topic.

But what Hogg has to say about the privilege from which she emerged—a cloistered world under threat from forces within (drug addiction) and without (terrorism)—is somehow both cutting and generous, specific and universal. Which makes sense. After all, The Souvenir is not just about her world, it’s about the artist herself and how she came to make her art.

It is a painful, beautiful process and we are all privileged to bear witness. 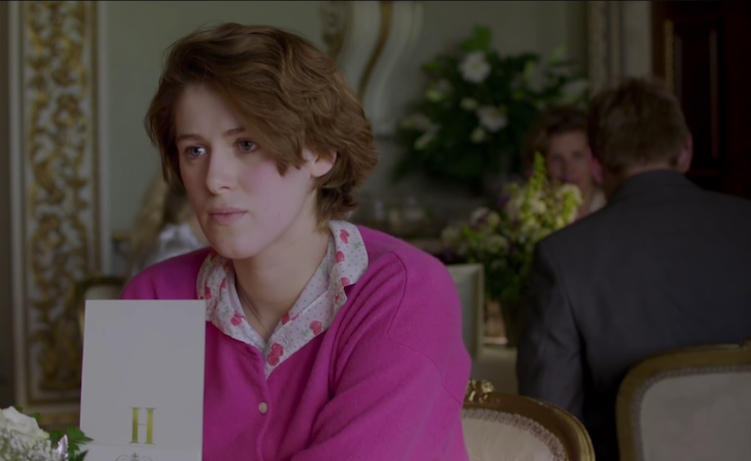