The final episode of the final season of HBO’s Veep is set to air Sunday evening, marking the conclusion to a supremely hysterical series that’s been lauded for its uncanny ability to anticipate actual political events. The show’s almost omniscient quality was front and center Thursday night at a cast panel and screening of Veep‘s penultimate episode, which was held at the 92nd Street Y on New York’s Upper West Side and moderated by CNN Washington correspondent Jake Tapper, who got a huge round of sympathetic applause when he expressed that watching Veep helped him cope with the insanity of his job.

Louis-Dreyfus has picked up a truly inhuman collection of awards (including six consecutive Emmys) for her portrayal of power-hungry would-be global operator Selina Meyer, a character who has curdled into pure malevolence as the years have rolled by. The show went on a two-year hiatus while Louis-Dreyfus, who’s also a co-producer of Veep, received treatment for breast cancer, giving the writers space to craft material that’s even more consistently dead-on when it comes to depicting the real-life personalities at the helm of our country.

One of the most excellent things about Veep is that it has somehow gotten meaner and more cynical as the real world outside it has gotten more depraved. In the first episode of Season 7, Selina’s fumbling campaign to reclaim the White House looks like it is headed towards a major gaffe. Suddenly, news breaks about a series of mass shootings, distracting the press. Selina is quietly jazzed: “This… could… work for us?”

At the panel, Tapper asked the Veep team how that story line came about. “I wouldn’t say that it came easy, necessarily,” Louis-Dreyfus said. “The writers, for sure, and all of us and Dave thought long and hard about how to exactly stick that landing, or theme of a joke. It’s hardly a joke, needless to say, but there were a lot of iterations of those jokes within the script, and it went through many passes.”

“We took it incredibly seriously because it’s horrible,” Mandel added. “And I will also point out that there was an incarnation of that script in 2017, pre-cancer, that had, I think, maybe one shooter. It was when we came back a year later, only basically 365 days later, and there had been as many shootings as there had been, and they had gotten just so much more horrible. So many schools, and Las Vegas, and all of these things. Again, it was dangerous, but we took it seriously and felt the horror is the matter-of-factness.”

He continued, “We’re not asking anyone to laugh at school shootings. We’re asking, ‘Why are politicians not paying attention?’ We took it incredibly seriously, but for me it just felt like, ‘If not us, who?'”

“Another point, too, is that we did it while being consistent to characters on the show,” Rich said. “One of my favorite moments at the very top of the first season is when Selina thinks the president’s had a heart attack and maybe died, and she’s so excited. It’s consistent with Selina this season thinking, How can I use this tragedy of the school shooting to enhance my power, to solve a political issue?”

Trying to make narrative sense of the bleak phenomenon of mass shootings is something that people will continue to do as long as dangerous people are still able to get their hands on guns. But Veep has always tried to find the gallows humor in America’s collective march toward an entirely uncertain future.

The sitting president inevitably came up on Thursday night. “[Trump] is gonna be in a room with measles and say, ‘Measles made a really good point,'” said Simons, a seemingly very nice man who plays the presidential candidate and certified lunatic Jonah Ryan.

Discussing his unhinged buffoon of a character, Simons added, “Somehow, the dumbest dude on television is smarter than what’s happening.” 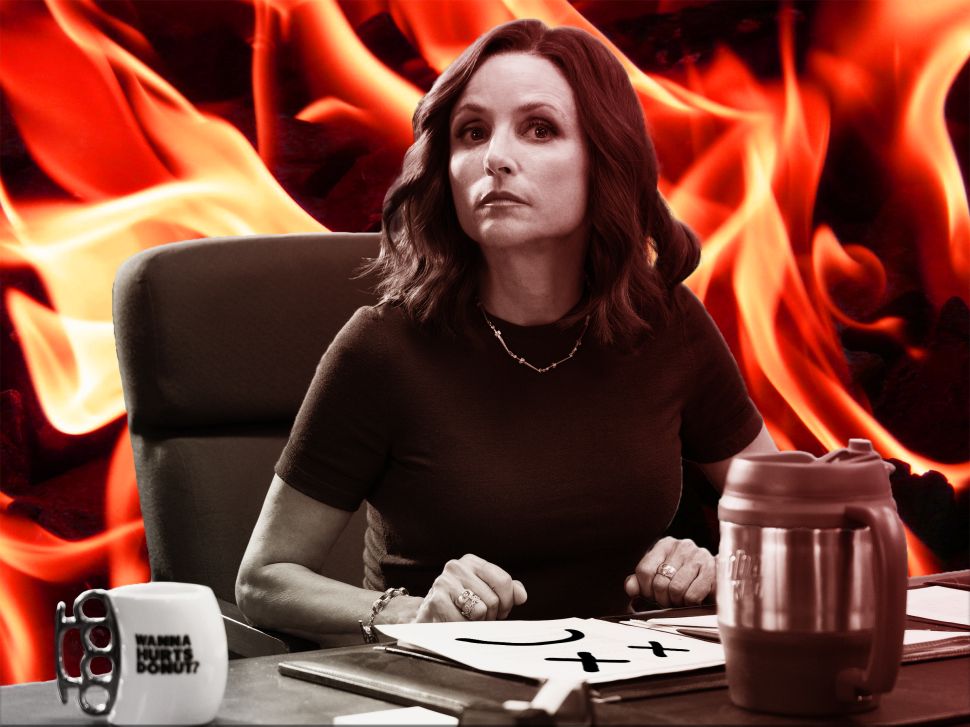