It’s never too late to fall in love. The Tomorrow Man is a charming, uplifting film about two small-town senior citizens who manage to do just that, against formidable odds. It’s not a movie for the immature. If you’re a member of the Marvel comics brigade, move along. Nothing for you here. But if you cherish the rare opportunity to watch magnificent actors as perfect as Blythe Danner and John Lithgow giving it all they’ve got, in a film about grown-ups, then the line starts here.

Ed Hemsler (Lithgow) is a retired ball bearings analyst in his mid-70s and a lonely widower with a grown son he can barely tolerate who shows only a passable interest in his father’s welfare. In the six years since he’s been inactive, Ed is convinced the end of the world is on its way. He even has a secret supply room where he stores everything from Cheerios to bottled in case the apocalypse arrives sooner than expected and he’s unable to leave the house. Ed’s every waking moment is spent preparing for tomorrow.

Ronnie Meisner (Danner) is an equally eccentric widow of the same vintage who likes to sew and is addicted to watching WWII documentaries on television. She lost her only daughter when the girl was only 13 and her husband died of cancer. A hoarder and a compulsive shopper, Ronnie lives alone in a house so cluttered with useless junk she can’t even find an ashtray.

These two odd social misfits are the last couple on the planet who seem like a possible romantic duo, yet they meet at the supermarket and slowly discover they like each other. You probably wouldn’t notice them if you passed them on Main Street, but first-time director Noble Jones, who also wrote the sensitive screenplay and photographed the film with finesse, makes Ed and Ronnie less simplistic than they appear on the surface.

Except for an awkward Thanksgiving dinner at Ed’s son’s house where nothing goes right, these are two senior citizens who learn to live with and for each other, falling slowly and insecurely in love. There are problems. One night of intimacy gives Ed a mini-stroke. And revealing personal details or sharing feelings don’t come easy for either of them. But The Tomorrow Man is an endearing movie about life’s second chances, and the finale, when both Ed and Ronnie learn to make difficult compromises to move in the direction of happily ever after, is nothing less than heartbreaking. Maybe living for tomorrow is not what it’s cut out to be. Maybe living for today is better.

The Tomorrow Man is a mature and radiant love story filled with intelligence, tenderness and joy that will warm your heart. Danner and Lithgow are simply miraculous! 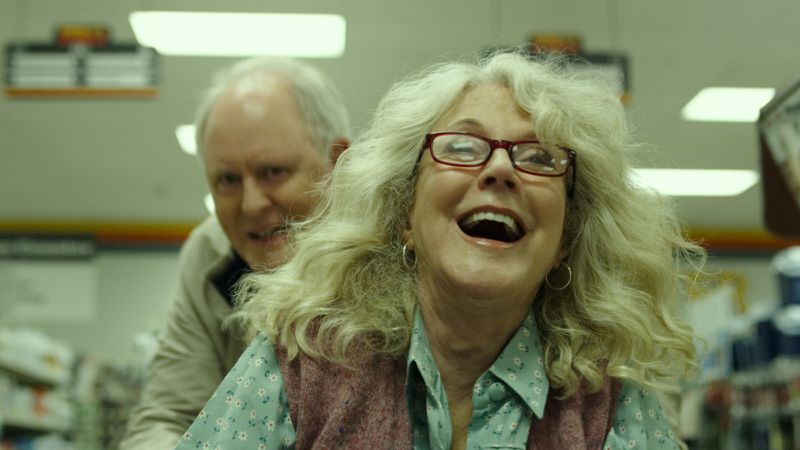