Tolkien is another ho-hum literary biopic, this time about fantasy author J.R.R. Tolkien, creator of The Hobbit and The Lord of the Rings. Beautifully photographed in the style of varnished floors and Minwaxed furniture, and enhanced by a round of fine performances from a British cast that includes X-Men player Nicholas Hoult, veteran actor Derek Jacobi and Lily Collins (most recently the girlfriend of serial killer Ted Bundy in the disastrously titled Extremely Wicked, Shockingly Evil and Vile), it has the credentials to amount to something more substantial and memorable than this empty epic directed by Finnish director Dome Karukoski. You watch along as it unravels with the tempo of a funeral dirge, and before you check your watch, you realize you’re already bored to death.

Meandering back and forth in out-of-sequence time frames from the death of his mother, who encouraged his fanciful imagination as a boy and left him orphaned along with his younger brother, to his life as the teenage ward of a wealthy benefactor in Birmingham, to his poverty-stricken student status at Oxford while totally dependent on scholarships, the movie shifts time, age range and location so often that it’s not always easy to pin down the narrative.

Chief focus is on a private club formed with three favorite fellow students who were also academic weirdos, their goal to change the world. Before graduation, World War I broke out and the boys ended up in the trenches of France, their dreams destroyed and their spirits dashed. Narrowly escaping death on a daily basis, the sensitive Tolkien (Hoult) thinks back to his youth, his secret literary circle and his fascination with a girl named Edith Bratt (Collins), who shared his interest in writing and creating his own language of words.

Some nice fragments emerge, like the night the young lovers were ejected from a production of Wagner’s Ring Cycle for being broke and improperly dressed, and sneaked backstage into the props department to listen to the rest of the opera dressed in the performers’ costumes.

But light moments are rare, thanks to a stolid screenplay by David Gleeson and Stephen Beresford that fails repeatedly to reveal the true events that inspired Tolkien or laid the groundwork for his future books. Most of his time in the blood-filled pits of the war that led to Mordor and the Dead Marshes is spent thinking about Edith and searching for his best friend Geoffrey, who is killed in the computer-generated battles, and then, later, we see Tolkien’s postwar attempts to get Geoffrey’s poems published.

Maybe Tolkien had a fascinating life story full of anecdotes that inspired his future work, but it isn’t told here. It’s the kind of movie you admire without the conviction that it was a movie worth making. 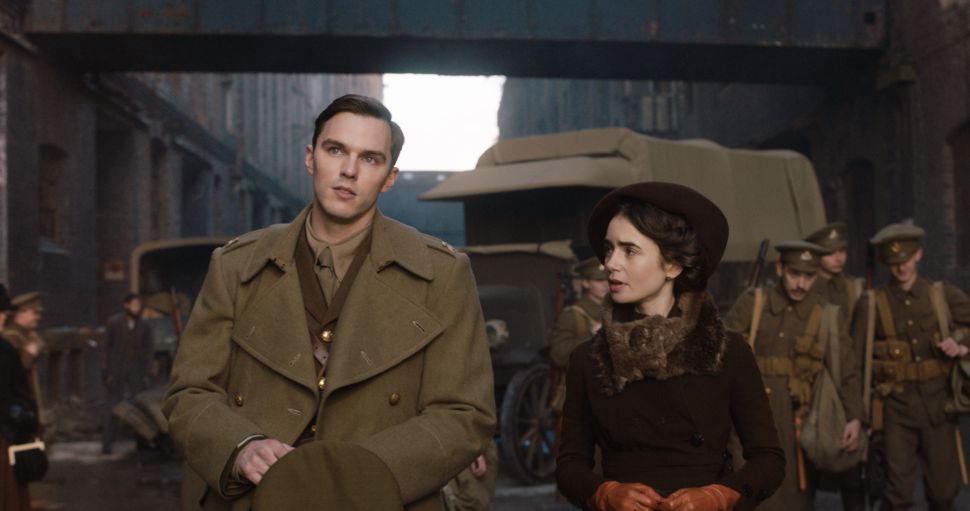