Russia, John McCain once said, is a gas station masquerading as a country. Rude, and false. Gas stations don’t have nuclear weapons, nor are they trying to conquer any nearby convenience stores. Petroleum products account for 59 percent of Russia’s exports, meaning Vladimir Putin is in charge of a one-note economy almost as addicted to fossil fuel as Saudi Arabia.

How reliant Russia is on the flow of oil and gas to Europe was made painfully obvious last month when officials in nearby Belarus noticed that oil tainted with organic chlorides, a contaminant often used to coax the last drops out of exhausted wells that can cause serious problems at refineries, was flowing through the Druzhba pipeline. Delivery of up to 1.4 million barrels of oil a day to customers in eastern and central Europe was halted. Russia was out $500 million a day in lost revenue. Rather than cop to delivering bad product—which would be very bad for long-term business prospects and could mean Russian wells have gone bad—Russian officials are claiming sabotage.

Keep in mind that even when the Druzhba is running clean, Russia’s economy is barely slogging along, a wheezing bear badly in need of a break. The country’s GDP shrank between 2014 and 2017 thanks to erratic oil prices and U.S. sanctions imposed after Putin’s 2014 annexation of Crimea.

If someone wanted to hit Russia where it hurt, they would mess with oil and gas exports. Which is exactly what Donald Trump, the U.S. president and the supposed puppet of Vladimir Putin, has spent most of the last year doing.

In order to sell more oil and gas to Europe, which already gleans 40 percent of its energy from Russia, Russia needs to build more pipes. One proposed pipe, called Nord Stream 2, would double the flow of natural gas from Russia, Europe’s biggest gas producer, to Germany, the continent’s largest gas consumer, and would allow Russian deliveries to bypass Ukraine, with which Russia is still at war. Nord Stream 2 would be very good for Rosneft, the state-owned oil giant under U.S. sanctions, and very bad for efforts to cut carbon emissions. And Trump, whom Russia tried very hard to get elected in 2016, according to Special Counsel Robert Mueller, absolutely hates Nord Stream 2.

The pipeline would mean “Germany is a captive of Russia,” Trump said last summer at the NATO’s annual summit. “I think it’s something NATO has to look at.” Trump used his address to the United Nations in September to slam the pipeline again, and apparently he brings it up every time he thinks about Angela Merkel, Germany’s chancellor. “Angela,” Trump told her last spring, according to The Wall Street Journal, “you got to stop buying gas from Putin.”

This week, it was announced that a bipartisan group of U.S. senators are working on more sanctions that would apply to companies working on the pipeline and their executives. There isn’t much agreement between Donald Trump and Democrats in Congress, but they agree that Nord Stream 2 is bad news.

How does any of this square with the Russiagate conspiracy that’s dominated Rachel Maddow broadcasts and #Resistance Twitter feeds for most of the past two years? It doesn’t. Nord Stream 2 is an enormous and unexplained hole in the otherwise neat theory that relieves the U.S. of the psychic weight of electing a mumbling xenophobic leader. If Trump was on Putin’s payroll, or Russia had dirt on him, or something, or whatever, why would Trump be gleefully costing Russia money it doesn’t have?

It is true that Trump dislikes Angela Merkel, a woman leader, and so it could be that his big dumb boy act is there just to cause her trouble. But Russia really needs the German’s money. They may actually need the money from selling gas to Germany more than Germany needs the gas, according to Michael McFaul, the former U.S. ambassador to Russia. McFaul, remember, is the same guy that Putin half-jokingly asked Trump to turn over to Russia for questioning.

According to an analysis by one of McFaul’s colleagues at Stanford University’s Hoover Institution, Trump and Merkel tussling over Nord Stream 2 does help Putin because it weakens the sinews of the 70-year-old NATO alliance—the military bloc still staring Putin down and the likeliest opposition force to someday, maybe, enter Ukraine and put a stop to his revanchist project there.

And if Germany does cave and agrees to stop shopping Russian, the likeliest alternative is liquefied natural gas shipped from the gas-abundant United States. So, this theory goes, any influence Putin has over Trump is outweighed by DT45’s desire to boost the American fossil fuel sector.

Dedicated game theorists might tell you that all this noise—and attention on the real cost to Russia, which has to pay Ukraine transmission fees to use a pipeline there, as long as Nord Stream 2 isn’t open—is just an elaborate ploy to distract you from what’s really going on.

The counterfactuals here are clear, they are not new, and they need addressing if this isn’t to be dismissed as time wasting. If Trump is in Putin’s pocket, why has the Trump administration expanded the ruinous Obama-era sanctions? Why is Trump continuing to make things worse for Putin, with whom he absolutely enjoys a very bizarre relationship? It makes no sense. It is something no Russiagate true believer can satisfactorily explain.

Vladimir Putin and Donald Trump are both relatively straightforward dudes. They demand and reward loyalty, they are sensitive control freaks.

Putin, the frustrated former mid-career spy who segued into a career in ruthless kleptocratic politics, likes expensive sweatsuits and hates risk. Cobbling together a pact with Trump, a half-sentient egomaniac with no self control, is not a low-risk endeavor.

Trump likely legitimately admires Putin for the simplest of reasons: Trump, a serial bullshitter who hates rules, likes tough guys who don’t take any shit and don’t bother with niceties. Putin is all that, and he’s also president of a country that happens to be filled with Slavic women, Donald Trump’s type.

To explain the tower project in Moscow that Trump coveted with a convoluted conspiracy, you have to somehow rule out the simplest reasons, which are: There is money to be made in Moscow, a relatively clean and orderly and mostly white place filled with slick billionaires and beautiful, high-maintenance women. Moscow is a cleaner and whiter Las Vegas. Moscow is a Donald Trump fantasy. Erase the last three years of history, or rewrite it so Trump loses on Election Night, and the Moscow dream still makes perfect sense.

Laid out like this, Russia in Trump’s eyes emerges as a very attractive investment opportunity. “But aha!” you say. “Why did Vladimir Putin want Donald Trump elected?” This, too, can be explained in simple and personal terms. Putin hates Hillary Clinton. Putin knew electing Trump would create mischief and disrupt American power, thus creating opportunity through chaos.

All of this can be true without there being a real pee tape, or collusion, or Russian spies in Trump’s Cabinet. Like his one-track father, Donald Trump Jr. was probably simple-minded enough to not really care where dirt on Hillary Clinton came from.

It may yet emerge that Russia has some undue influence on Trump, a simple grifter who has floated through life on his father’s money. That is not the simple explanation, and thus the unlikeliest. Meanwhile, Donald Trump is very gleefully and very seriously threatening the vitality of the Russian economy—and, with it, the stability of the Russian state. This is not something puppets generally do. 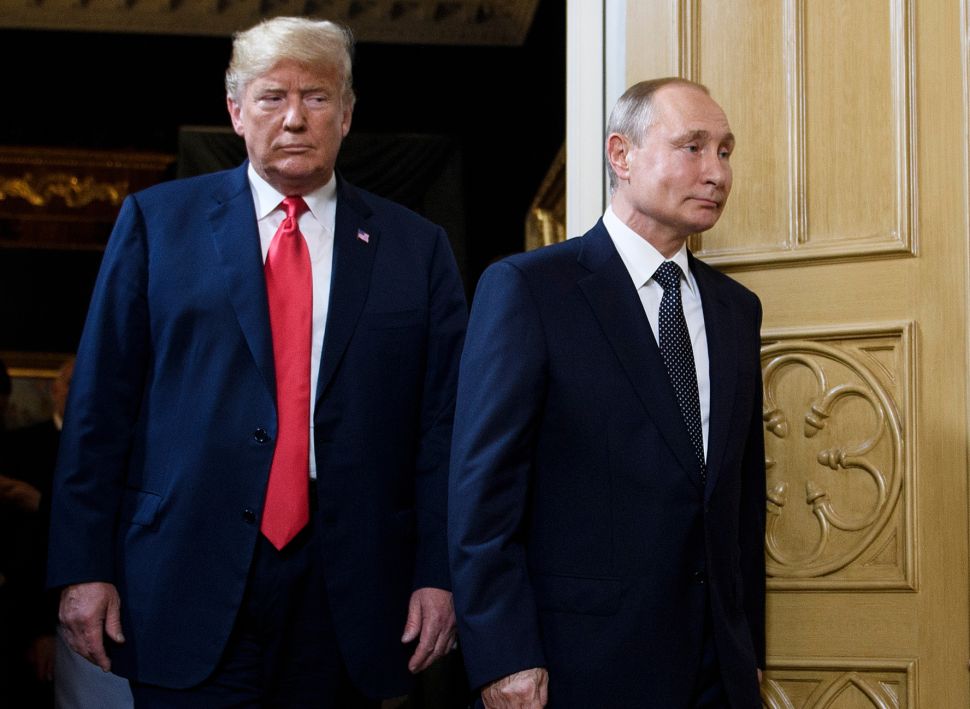