“Trump vows to destroy half of Chinese stock investors with a snap of the finger,” wrote Lin Qi, founder of the Shenzhen-based private equity firm Smaum, on the Chinese social media company Weibo.

A financial news contributor to Toutiao (a top Chinese news aggregation platform) also posted an image of Trump as the villain to Weibo, captioned “Chief stock analyst of the universe: Thanos Trump. Destroying half of stock investors with a finger snap.”

Both memes were shared thousands of times, with many more proliferating across the social media platform.

The depiction was a response to Trump’s threat of raising tariffs on $200 billion of Chinese imports, which the president said would go into effect on Friday.

“For 10 months, China has been paying Tariffs to the USA of 25% on 50 Billion Dollars of High Tech, and 10% on 200 Billion Dollars of other goods. These payments are partially responsible for our great economic results,” tweeted Trump. “The 10% will go up to 25% on Friday.”

Following the president’s re-escalation of the trade war, Chinese stocks plummeted by more than five percentage points, while Chinese currency declined against the dollar. Although Chinese delegates are scheduled to meet with the Trump administration on Wednesday, Beijing’s government has fanned rumors it is considering cancelling the discussions as a response.

For 10 months, China has been paying Tariffs to the USA of 25% on 50 Billion Dollars of High Tech, and 10% on 200 Billion Dollars of other goods. These payments are partially responsible for our great economic results. The 10% will go up to 25% on Friday. 325 Billions Dollars….

In Avengers: Infinity War, the alien Thanos collects six magic gems which allow him to destroy half the universe’s living organisms by just snapping his fingers. In the newest Marvel movie, Avengers: Endgame, superheroes attempt to undo Thanos’ destruction. 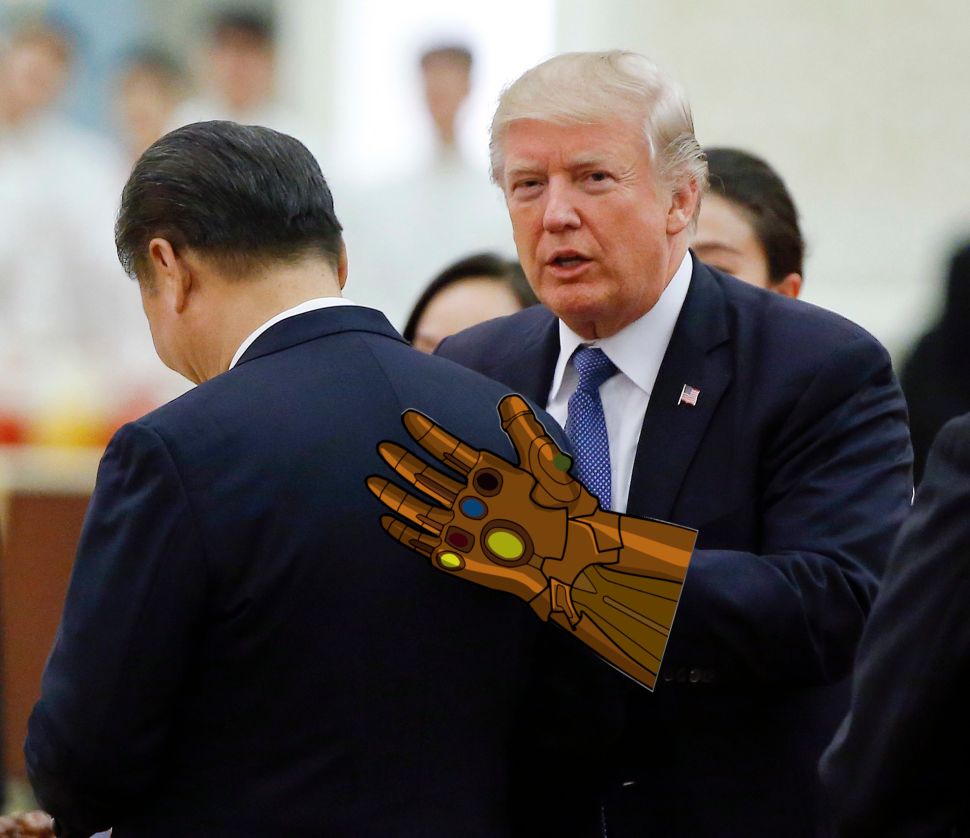