The series finale of Veep airs this Sunday, offering viewers a chance to reflect on the hysterical antics and shocking incompetence of the HBO comedy’s cast. Over the Emmy-decorated satire’s seven seasons, Selina Meyer and her band of insult-flinging idiots have scapegoated members of their team to save face during a medical file leak, offered “mindfulness and meditation” in the wake of a mass shooting and taken responsibility for “freeing Tibet.” It’s a wonder they ever made it to the White House. Then again…

To commemorate the celebrated show’s run, and to pay homage to the most beloved hypocrites on TV, here is the definitive ranking of Veep characters in order of most competent to least competent.

Keeper of calendars and scheduler of appointments, Sue is by far the most competent character on Veep. Every circus has its ringleader, and Sue somehow kept the Meyer administration afloat, at least partially, during her five seasons of the show. (Since her absence, things have naturally gone off the rails.) And did she ever think twice when Selina asked, “Did the president call?” No.

Kent’s got the stats—whether you like them or not. Efficient and steadfast, Kent’s got an ear for pronunciation (“Ne-va-da”) and a firmer grasp on grammar than the MLA. Ever-diligent, he’s been known to run flash polls to understand how likable Catherine is or where Selina ranks among other presidents. “Right ahead of James Buchanan,” Kent shared, “who many feel caused the Civil War.”

Stone-faced as Kent, Marjorie is no bullshitter. Two episodes ago, she refused to walk into Selina’s thinly veiled trap, snatching what could have been an incriminating recording right out of a decoy bouquet. Bodyguard, financial administrator, mother: Marjorie can do it all without blinking.

Tense, downtrodden and “shrill,” Amy Brookheimer is efficient to a fault. She’s bragged about eating hummus with a pen cap and dry shaving Selina’s legs during a cabinet meeting. She’s a self-sufficient machine, even if that means putting others before herself. (Don’t worry, she set a reminder to freeze her eggs.)

On a team of soulless monsters, Ben is perhaps the most jaded. A sharp-tongued straight-shooter, he may not know where his wife is but he’s provided Selina with as sage advice as possible during her constant state of disarray. And he never lets his drinking interfere with his work!

Devilishly charming, Tom James’ personality and charisma often get him further than his politics or ideas—in the White House and the bedroom. As economy czar, he was also all-too-aware of his peon role, comparing the position to that of a baseball catcher. “There’s not a lot of glory, but a lot of squatting. And a lot of asses in your face.”

Dan Ego—pardon, Egan—is smarmy, arrogant and opportunistic. He knows how to get ahead using deceit and sexual prowess, making him an invaluable member of the Meyer team. That is, until he decided to sleep with Selina. You had a nice run, Dan.

Sweet, sweet Richard. He saved a burning 7-Eleven, chopped wood for Jonah and even performs in a Gilbert and Sullivan Society. A much-needed optimist on TV’s most cynical comedy, Richard Splett is enormously good-hearted even if he fumbles working for the dirtiest people in the business. Who could forget his gaff in not hitting the record button on his camera at the bowling alley, or his cri de couer, “What do we want? To get the votes counted! When do we want it? Hopefully before the deadline.”

Perhaps the most liberal and morally ethical character on Veep, Catherine’s frequent bouts of weeping and domineering mother often inhibit any potential action on her part. She did, however, succeed in creating a doc, “Kissing Your Sister,” the title of which says it all.

Selina’s loyal bagman, Gary is good at giving Selina hand sanitizer, yoghurt and not much else. A slew of derogatory remarks have been hurled at Gary, but two of the most vicious—and hysterical—may have come from Tom James (“Gary Walsh, you need to understand, is a 12-year-old boy trapped in the body of a 12-year-old girl”) and Selina herself: “Gary has a very limited set of skills. Mainly I would say they are picking objects up and putting objects back down.”

A PR man with the communication skills of a tree stump, Mike McLintock doesn’t even get his own name right. (“Stick around for more McLintock with Mike McLintalk!”) His press conferences are chaotic as Sanders’, and his printed speeches for the president often come with a stain of whatever food he was most recently shoveling down his throat. His shirts do, too.

Much like The Office, Veep hinges on having a fool at its center, someone the comedy can tornado around. Selina Meyer is this show’s clumsy nucleus. Mispronouncing states, falling out of swivel chairs and employing her lawyer friend Karen who asked, “Is the sky blue? Is wet?” are only the tip of this inept iceberg. Like many unskilled politicians, Selina makes up for her lack of savvy by barking orders, spreading lies and having Gary fetch her smoothies. She’s a train wreck you can’t not watch. 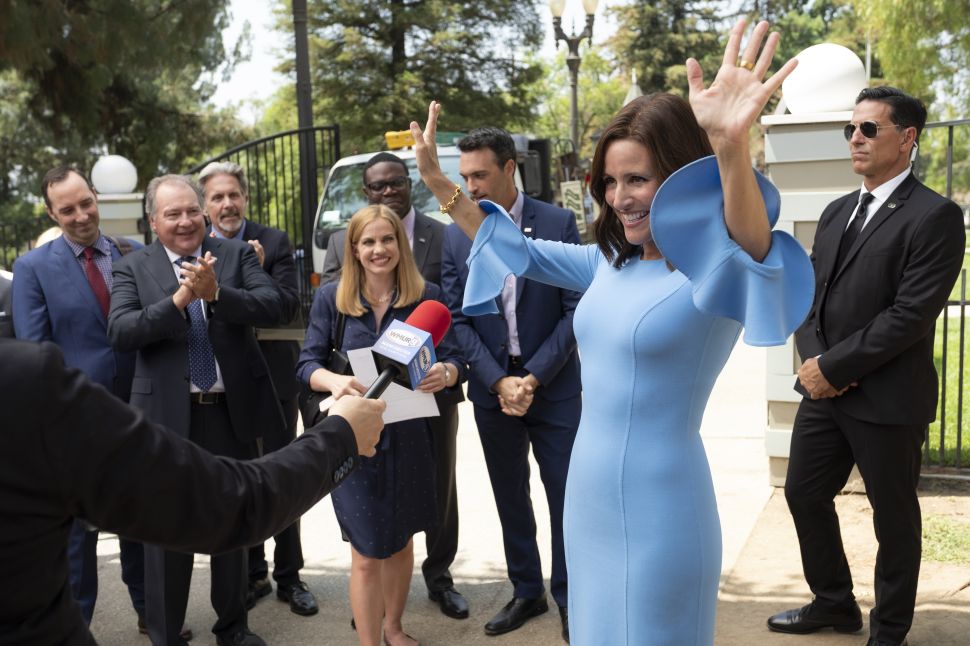