In January of this year, office-sharing super-startup WeWork rebranded itself by stripping the word “work” out of its logo to become “The We Company,” a clear shift away from its old image as a co-working venture. Around the same time, WeWork confidentially filed for an IPO, which the company kept secret until last month.

With a private market valuation of $47 billion, WeWork is currently the most valuable VC-backed company in the U.S. But it’s also the biggest money loser. Last year, WeWork posted a nearly $2 billion loss. And in the most recent quarter, the company continued its downward trajectory with a $264 million quarterly loss.

As its IPO looms, WeWork faces a serious need to boost its bottom line in order to justify its sky-high valuation for future investors.

In recent years, WeWork has introduced a number of programs outside commercial real estate to diversify revenue streams. Co-working membership still accounts for the majority of WeWork’s revenue, but its share of total sales has been going down. In 2017, for example, membership made up 93 percent of WeWork’s total revenue. A year later, that percentage fell to 88 percent.

To help better understand how America’s most valuable startup is preparing for its market debut, here is a breakdown of how WeWork makes money—other than renting desks and offices. (The analysis is based on private market researcher CB Insight’s recent report, “WeWork’s $47 Billion Dream.”)

Launched in 2017, the WeWork Services Store is advertised as a “one-stop shop for business” that offers members various discounts and deals on food and drinks, fitness, transportation, accounting tools and other office necessities.

In 2018, WeWork relaunched its startup incubation program, WeWork Labs, to highlight the company’s ambition to work with startups and solo entrepreneurs beyond just providing them with a workspace.

The new version of WeWork Labs features a mentorship program with WeWork’s own executives and educational resources—some powered by outside partners like Flatiron School.

In February of this year, WeWork revamped its mobile app with a new feature that allows members to connect and collaborate with each other. Through a list or map view, members can see the profiles of other members nearby and meet up for coffee or work.

This new service is particularly useful for freelancers and upstart entrepreneurs, as they often need to find contractors or business partners with the right skillsets.

All of the value-added services mentioned above have a common objective—to encourage existing WeWork members to stay a bit longer, either through office refreshment, professional training or hiring facilitation. But this new service called “Powered by We,” launched in 2017, is an expansion game on the next level.

As its name suggests, “Powered by We” offers a full-service package—from renovating an office to day-to-day management—to WeWork’s growing base enterprise clients, which currently accounts for 32 percent of total membership revenue. In this way, WeWork is still able to claim a lucrative service fee without having to take on an expensive piece of real estate itself.

Last July, WeWork struck a deal with a 30-year-old UBS office in New York. Specific terms were undisclosed, but WeWork said it was the biggest “Powered by We” deal it had scored so far.

In 2018, WeWork had 400,000 members in 99 cities around the world. In this day and age, it doesn’t take a savvy tech insider’s instinct to know that something has to be down with that massive trove of user data.

Since 2015, WeWork has acquired a number of space analytics firms to support existing and future data-driven projects. Notable acquisitions include Case, Teem and Euclid. 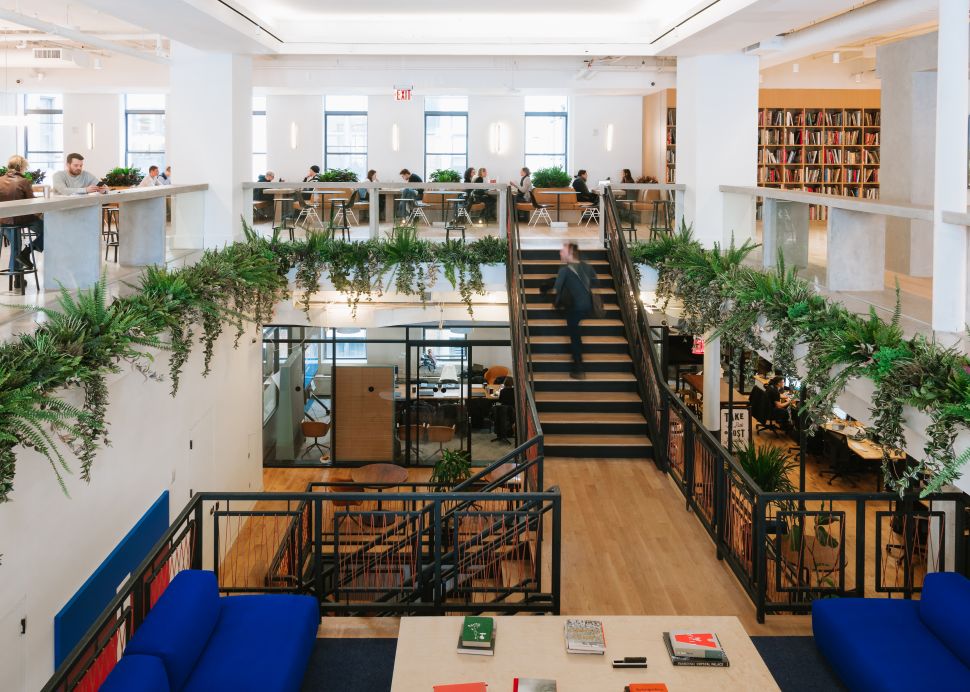