Consider the appeal of some of Netflix’s recent offerings: You, back in December, was about a bookstore manager obsessively stalking his crush, while earlier this month we got, Dead to Me, a twisty drama vaguely about grief but mostly about silly cliffhangers. Both series were frequently considered “guilty pleasures,” fun and buzzy, utterly addictive, and with their own merits (You did have some smarts behind it while Dead to Me was anchored by two fantastic performances). After marathoning both, it feels only natural to move on to What/If, a series that relies more on its own ridiculousness than on quality writing.

Created by Mike Kelley (who has already shown an affinity for soap dramas with Swingtown and Revenge), What/If is marketed as a “neo-noir thriller” about “the ripple effects of what happens when acceptable people start doing unacceptable things.” It’s an obnoxiously vague descriptor, which is amusing considering the show is decidedly obvious. Billed as an anthology, the first season follows Lisa (Suburgatory’s Jane Levy), a young scientist trying to secure funding for her company, Emigen, which has lofty goals of saving lives. (Her younger sister died of a curable form of leukemia, an event that informs much of Lisa’s life.) The company is quickly on its way to going broke—until venture capitalist Anne Montgomery (Renée Zellweger) approaches Lisa with a proposition: Anne will give Emigen $80 million, therefore effectively saving it, in exchange for one night with Lisa’s husband Sean (Blake Jenner).

What/If will immediately feel reminiscent of Indecent Proposal—and the show leans into it. Upon hearing Anne’s terms, Lisa says it’s “ripped right out of a bad ‘90s movie.” Anne replies, “I thought that film was quite decent.” That exchange pretty much sums up the level What/If is on. If you find it cheeky, you might enjoy it; if you want to throw the remote at the television, it’s probably not for you.

Lisa and Sean are quick to decline, but we all know they’ll soon acquiesce—not only does Lisa need to save the company but Sean could use the financial help to jumpstart his new career as a firefighter. Sean isn’t allowed to discuss what happened during his night with Anne—not that he really wants to—and Lisa isn’t supposed to ask, but of course she’s full of regret and driving herself crazy thinking about it.

From there, What/If fully gives in to its melodramatic nature: We learn that Sean, a former pro baseball player, has rage issues and a mysterious incident in his past; Lisa finds herself digging deep into researching why Anne would even propose this; a large, golden set of keys prominently displayed in a clear box; an ex-girlfriend pops up out of nowhere; there’s blackmail, violence, literal and figurative chess games, and a butler who gravely says things like, “I think when you’ve suffered terrible things, you become capable of terrible things.” It’s so much presented so quickly—which, admittedly, is part of the fun—but it never really gels together, at least not in the first five episodes.

Anne, a cold-blooded woman with designs on power and control, is easily the center of the series, the person who seems to know everything before everyone. She’s so completely absurd that by the time she’s casually (and skillfully) shooting an arrow at the wall, it’s barely a surprise. The role is somewhat of an odd choice for Zellweger, but she does provide a gleeful, campy, and compelling performance—although sometimes it’s hard to tell if she’s in the same series as everyone else. (Meanwhile Levy, a gifted actress, is given the short-end of the stick with such a dull character. Jenner, who doesn’t have much to do except sometimes look angry and always look hot, is perfectly adequate.)

What/If is a series that can’t really be judged on whether it’s “good” or “bad” (but if we must: it’s definitely the latter). It comes off  less like a television show and more like a bizarre collection of ideas that were meant to be distributed over five different soap operas. It’s preposterous but compulsive; I can’t quite say I’ve enjoyed watching the episodes but I’m dying to see how it ends. 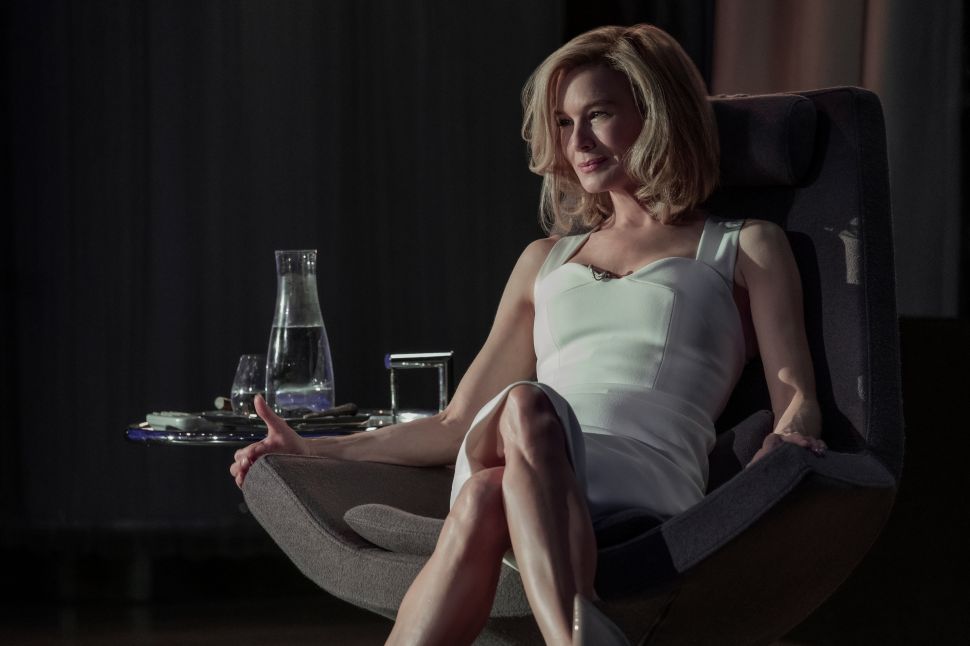