Nobody can deny that this year’s Whitney Biennial looks stunning. The museum’s open floor space combined with a restrained number of physical artworks creates ample opportunity for elegant sight lines and viewing vistas. Whether a well-hung show is a good show, though—well, that’s another question, isn’t it?

Perhaps more than usual, the large scale of the exhibition and sullen mood make that answer hard to pin down. Now, two years into the Trump presidency, once ubiquitous fears over vast, unchecked corruption and erosion of civil liberties melt in their realization. A mixture of anger and tired resignation has taken its place, which, in this Biennial, often takes the form of familiar subject matter and art-making strategies. Overwhelmingly, artists articulate a desire for a more equal and just society, though usually from a stakeless and safe vantage point. Their mediums of choice—junk-assemblage, identity-based photography, and large-scale figurative painting—reflect dominant art-making trends that privilege community and the hand of the artist over detached manufactured art. If you’ve seen these approaches at an art fair, you’ll see it here.

To be fair, that’s probably true of all biennials, and the good news for curators Jane Panetta and Rujeko Hockley is that once out of sight, the vast majority of less cogent work slips out of mind. Thus, the exhibition, which includes 75 relatively well-known artists and collectives (up from 63 in 2017), ultimately presents a strikingly accurate overview of contemporary art today—in all its strengths and weaknesses.

Unsurprisingly, the most talked about artwork relates to the ongoing controversy surrounding Whitney board trustee Warren B. Kanders, the CEO of Safariland, a company that sells tear gas that was recently used on migrants at the border. Triple Chaser, a film and research project produced by the collective Forensic Architecture along with filmmaker Laura Poitras and Praxis Films, employs artificial intelligence to trace the use of tear gas cartridges and a mix of research methods to track Sierra Bullets. With the help of narrator David Byrne, the video trolls Kanders by pairing the dramatic music of Four Last Songs (the last opera written by Richard Strauss before he died and one of Kanders’ recent philanthropic projects), with the tracking of the Triple Chaser tear gas canisters. In the hands of Forensic Architecture, art is a weapon.

This current controversy recalls the 1969 protests by the Guerrilla Art Action Group, which demanded the Rockefeller family resign from MoMA’s Board of Trustees for its involvement in the manufacture of weapons. Fifty years on, we don’t seem to have any better answers. The museum tolerated the criticism then, and now we’re no closer to producing a set of ethical guidelines that might preclude arms dealers from joining museum boards. (Almost 50 of the 75 artists participating in this year’s Biennial signed a letter calling for Kanders to step down, though, so we might yet see some movement.)

Kanders’ presence casts a shadow over the show that I often found difficult to escape. Any political statement within this context can read as either compromised or ineffective. To wit, Pat Phillips’ mural-sized painting depicting a banner inscribed with the words “Don’t Tread on Me” and a real wooden fence that obscures a canister of tear gas labeled “Riot Control” has already been criticized elsewhere. It’s hard to blame a critic for feeling this way—it’s a little heavy handed, and as Andrew Russeth at Artnews points out, the fact that this work can even exist within the show indicates that the museum sees no threat.

I don’t entirely agree with his take on this, though, because the alternative—silence—doesn’t work. Solving that double bind, for me, means taking on more responsibility as a viewer. If an artist feels the message is important enough to deliver even within a compromised environment, I have to decide whether it’s important enough to take seriously. In this case, I’m glad the painting exists, because I’d rather talk about the subject and hope for change than helplessly watch it disappear.

The additional negotiation involved in evaluating this year’s Biennial cuts both ways because, within this conflicted space, art that doesn’t engage the political can seem frivolous and irrelevant. As a viewer, it takes a bit of work to recalibrate from emergency-institutional-critique-brain to regular old art-viewing-brain. The extra work is worth it, though, with the Biennial’s best art offering moments of pure exhilaration and delight. Brian Belott’s refrigerator of dank goods, for example, hilariously encases doorknobs, toothpaste and mustard in suspended blocks of ice. The appliance doubles as a display device, elegantly presenting these bizarre masterworks as relics.

Ragen Moss’s hanging torso sculptures resemble a museological display of high-end T-shirts, but the handwritten lettering on many of the acrylic pieces lend the work a kind of disarming intimacy. Outside, Meriem Bennani’s a double bullhorn-shaped set of playfully colored sculptures croon boy band harmonies at each other when viewers press a button.

On another of the Whitney’s rooftop decks, Nicole Eisenman presents a harsher reality. A motley crew of misfit sculptures led by a giant pulling a raft of figures and hangers-on moves forward. The grouping offers an alternative to the nearby live video feed she streams from an upstairs exhibition celebrating the all-white male painters of the sixties. The road traveled doesn’t look all that fun. The work is relentless and needlessly hard, but we’re at least heading in the right direction.

Critique of inequality in all forms runs through the Biennial. Pretty much every catchphrase ever used in a high-end home furnishing catalogs makes its way into Ilana Harris-Babou’s humorous trilogy of videos critiquing corporate America’s glossed over history of slavery and oppression. For example, Reparation Hardware, a play on the brand Restoration Hardware, promises a new line of furniture addressing unresolved accounts of the past and untapped potential of the present. “Their liberation was handcrafted,” says Harris-Babou, before the video cuts to a shot of a cow peeing. In the context of the overall Biennial, which the curators rightfully describe as focused on the handmade, the line reads as a subtle jab.

Many painters in this show delivered, and then some. For example, the sheer painterly mastery and bright palette of Janiva Ellis’ Uh Oh, Look Who Got Wet literally instill awe. In this work, a foreboding landscape threatens to envelop a cartoonish female figure trekking through the , just as it has a companion sinking into the earth. Of similar size and skill, the thin washes and subtly rendered figures in Jennifer Packer’s paintings of friends and family create an ethereal presence within the piece.

Unsurprisingly, the most iconic works in the show command the most attention. Colorful banners inscribed with the words “Stand Your Ground” by Jeffrey Gibson (Mississippi Band of Choctaw Indians and Cherokee) hang in the center of an expansive gallery, boldly celebrating queer culture and peaceful resistance to colonialism. Daniel Lind-Ramo, a Puerto Rico-based artist, wraps a Virgin Mary made of salvaged materials and coconuts in a royal blue tarp distributed by FEMA after Hurricane Maria. Titled Maria Maria, the majestic figure stands squarely against the window looking out onto the .

Similarly alluding to the elements, Laura Ortman (White Mountain Apache, and full disclaimer, my hairdresser) uses a four-track tape recorder to combine a range of instruments as well as field recordings of ambient environmental sounds. The show’s video, My Soul Remainer, captures Ortman playing the violin in a variety of landscapes, often moving her fingers too fast to track. Offering a more realistic picture of nature at work, the graphic birthing photographs of Heji Shin present the reality of Gustave Courbet’s famed crotch shot titled Origin of the World—an infant, covered in blood and halfway birthed.

The absence of experience art and immersive installations perhaps mark a limitation of biennial budgets and real estate—there’s just not enough money to exhibit that kind of art in shows this large. Still, other forms of ambitious productions take center stage at the Biennial. For example, Martine Syms’ installation Cita’s World, an imagined reboot of the 1999-2003 Black Entertainment Television’s (BET) same-named music video show, flashes snapshots, text and avatars over a painted box in cell phone dimensions. Partially obscured large orange vinyl lettering is affixed to the wall: “People aren’t friends, forever exes.” It reads like the Rosetta stone for an unsuccessful dating app. Our identity hides in technology’s glitches.

While Syms drew inspiration from an old show to examine current technology, Marcus Fischer set up an elegantly displayed audio real, stretching the tape up the wall and back down as it played back the fears expressed by friends the day before Trump’s inauguration. I heard only a few words—fascism, immigration, white nationalism—and felt so anxious I had to move out of earshot. Did anyone predict migrant children would be teargassed and separated from their families? The thought of looking back knowing so much needs attention now seemed indulgent.

At that moment, I failed my own pledge for more responsible viewership. However irrational, I pushed off shared experience, the whole point of the piece, because within the context of this show, and the broader political context of Trump’s America, looking behind us feels like the kind of poetry we can no longer entertain. 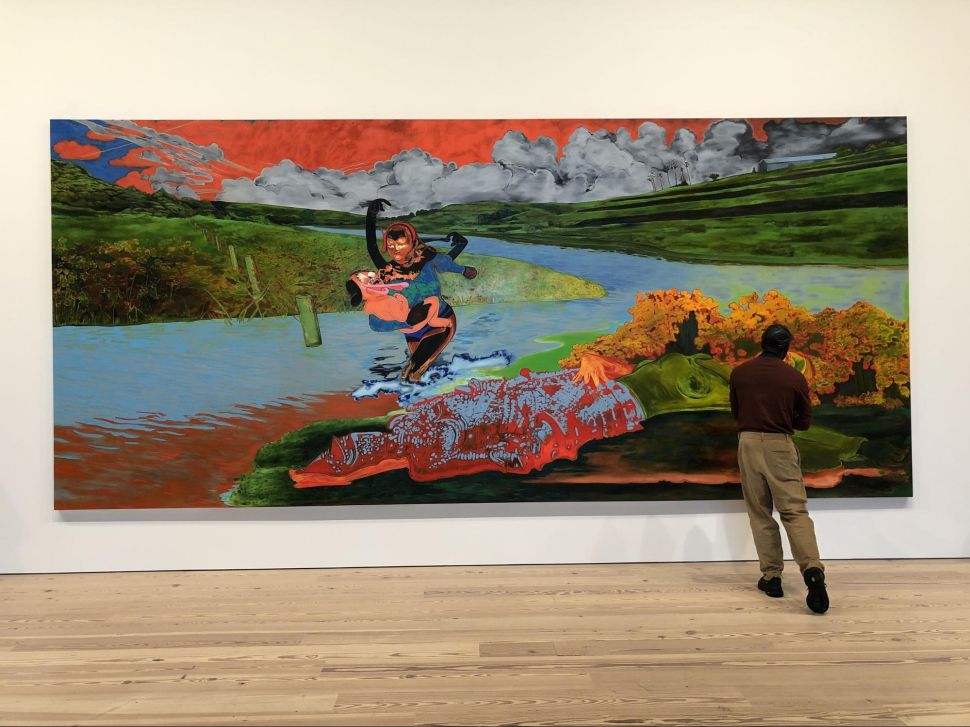