This Wednesday, a momentous occasion is set to take place in Hollywood that will absolutely rock celebrity culture to its very core. No, it’s not a new movie premiere or a wedding: It’s the Hollywood Star Walk of Fame ceremony for none other than Guy Fieri, patron saint of flames and grilling, and one of the most influential chefs in the United States of America. Scoff all you want, but few other food figures in this turbulent country deserve this accolade more than Fieri, a truly singular culinary superstar whose influence has seeped into the very fabric of our being.

If your awareness of Fieri is limited to a picture in your mind’s eye of fluorescent blond spiky hair, here’s a miniature summary of his actual CV: In 2007, when production of his wildly popular show Diners, Drive-Ins and Dives was just beginning, Fieri was the owner of three restaurants in California and the parent of two young sons. Cut to 2019 and he has written six best-selling cookbooks; opened a series of self-branded restaurants with locations everywhere from Norfolk, Va., to Menlyn, South Africa; and successfully built a cheeky bad-boy empire on the notion that no matter who you are or where you come from, you deserve to relish a fantastic meal.

In 2010, The New York Times wrote that “this platinum-haired, heavily tattooed chef-dude has proved that he has a Sarah Palin–like ability to reach Americans who feel left behind by the nation’s cultural (or, in his case, culinary) elite.” There are easy comparisons here: Fieri’s anti-establishment persona and attitude can lazily be connected to the vast quantity of voters who put Donald Trump in office. But unlike Trump, Fieri only wishes to spread positivity and a feeling of simple joy that can only be derived from hunkering down with something smothered in a succulent BBQ sauce.

Critics have not always been on board with what Fieri is serving. In 2012, esteemed food critic Pete Wells eviscerated Guy’s American Kitchen & Bar in Times Square with a memorable takedown of the burgers, ice cream, Caesar salads and Awesome Pretzel Chicken Tenders on the menu. But the magic of Fieri is that he has survived fire and brimstone to bend the world to his way of thinking.

Fieri may serve fatty beef chili to the masses, but that doesn’t mean he hasn’t earned his spot in history. In fact, in a world gone mad, the Mayor of Flavortown’s dedication to offering feel-good food in enormous quantities may be just the balm we need. 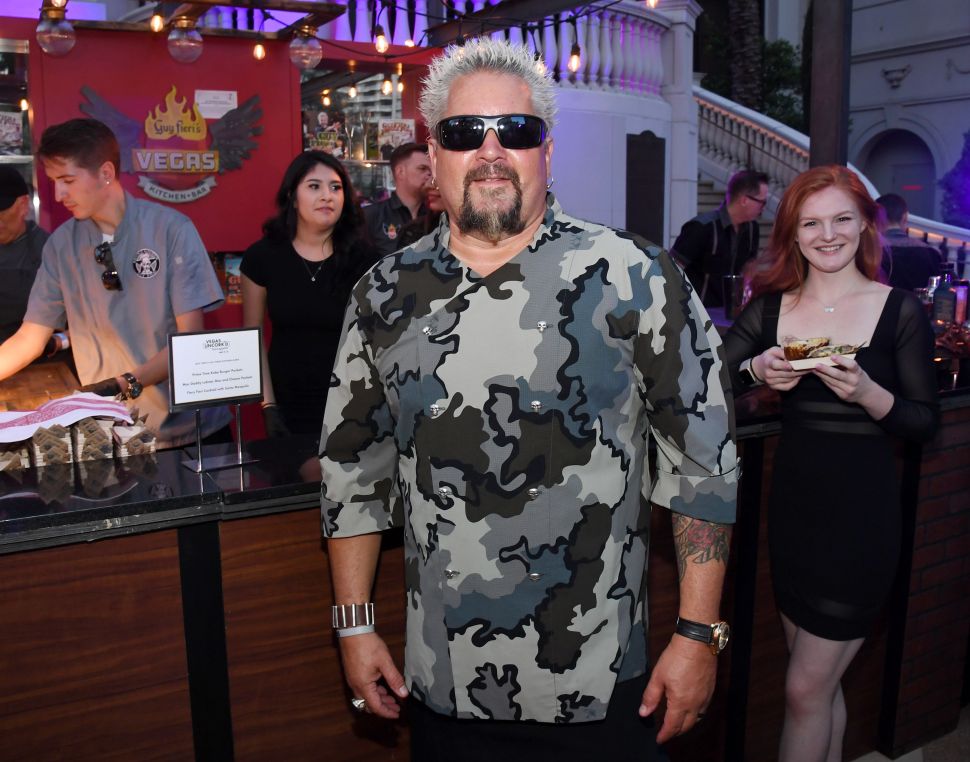