Yusaku Maezawa, the Japanese fashion tycoon who signed up to be Elon Musk’s first client to go to the moon aboard a SpaceX rocket, is having a little bit of personal financial crisis to pay for his upcoming space trip.

On Sunday, the owner of Japanese fashion e-tailer Zozotown announced on Twitter that he will be listing a few valuable paintings from his personal art collection in a Sotheby’s auction in New York on May 16. As a preview, Maezawa attached pictures of two artworks ready for sale: an Ed Ruscha painting worth an estimated $3 million and an Andy Warhol painting worth an estimated $2 million.

“I will give them to the person who takes over seriously,” he tweeted.

When asked by a Twitter user whether the sale was because he ran out of money, Maezawa replied, “Yes, I never have money, [because] I always spend it right away.”

As much as it may sound like a joke, both parts of Maezawa’s own evaluation of his financial situation are unmistakably real.

The 43-year-old art-loving Japanese billionaire is widely known for his spontaneous and extravagant spending habits. In January of this year, for instance, he started a random Twitter campaign to give away one million yen ($9,200) to 100 strangers who would retweet his new year’s greeting. In two days, his “Happy New Year” message was tweeted 5.5 million times, making it the most shared tweet ever.

Two years ago, Maezawa shelled out a whopping $110 million on a Jean-Michel Basquiat painting at a Sotheby’s auction in New York. The amount doubled the painting’s previous transaction record in the 1980s. At a Christies’s auction a year earlier, also in New York, Maezawa spent $98 million in two days on five artworks, including another Jean-Michel Basquiat painting.

“Rather than monetary or investment value, I felt I had a personal responsibility to take care of this masterpiece and preserve it for the next generation,” he said of the Jean-Michel Basquiat purchase back then.

But in the meantime, his clothing company hasn’t been able to perform well enough to catch up with his lavish art buying spree. In the past two years, due to a series of management missteps and profit decline, Zozotown’s market value has tumbled more than 50 percent, reducing Maezawa’s net worth to below $2 billion as of January this year from $4 billion in 2016.

In September of last year, Maezawa signed up to be SpaceX’s first passenger to fly around the moon on a yet-to-be-built Big Falcon Rocket (BFR) rocket. Musk said the total cost of the trip was “not a trivial amount” and that Maezawa had already put down a hefty deposit. 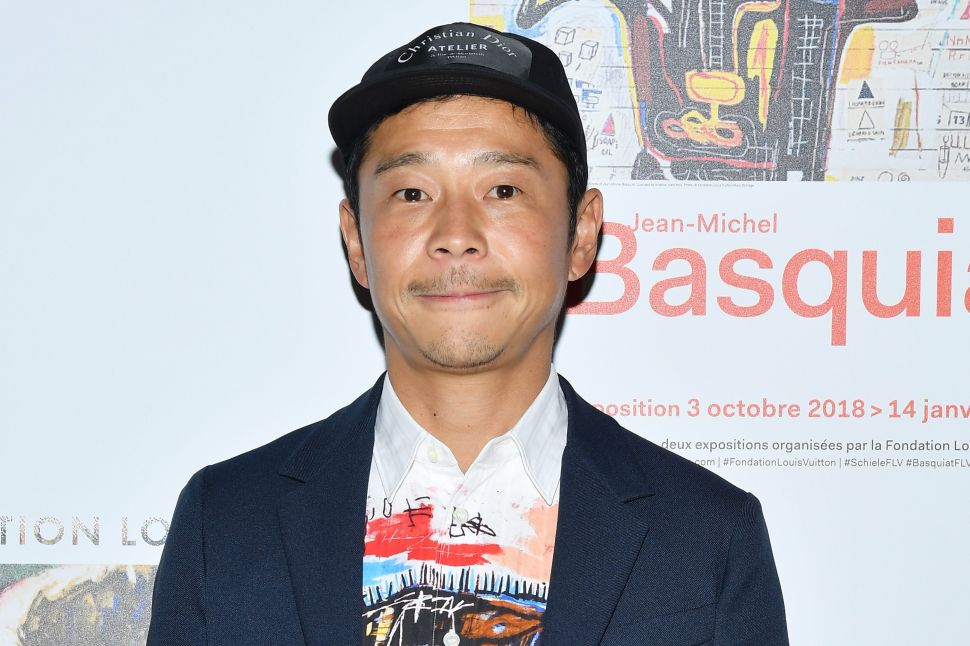