Alex Brightman, 32, is quickly making a career of recreating major movie roles in Broadway musicals. So far it’s working in his favor: he scored his second Tony nomination this season for his over-the-top performance in the title role in Beetlejuice, currently at the Winter Garden Theatre. (His first Tony nomination came in 2015 for Andrew Lloyd Weber’s musical School of Rock, in which he took the Jack Black role.)

It also takes him a long time to get ready for a performance. The show involves seven different wigs in various colors. “Beetlejuice is a mood ring type of character who shows his emotions on everything,” Brightman explained. Lots of costumes, too. “I’m changing constantly,” he said. “I do sweat a lot in the show,” Mr. Brightman added, as his show makeup was being applied to his face in dressing room. “It’s a lot of maintenance.”

What do you do on the day of a performance?

I get up early, at 7 a.m., without an alarm. That’s my anxiety waking me up. Usually I wake up about two hours before my wife has to go to work, and I leave her alone for that period. Right after School of Rock, I sold a pilot to NBC, so I tend to write treatments and books to musicals during that time. Sometimes nothing comes out. Sometimes I’ll have a huge breakfast, hang out, run errands. It’s pretty chill. There’s usually not too much going on. I watch a lot of television to keep current on that. And I like to go on old man walks. That’s when you get a coffee and slowly drink it and walk around the neighborhood nodding to people. I’ll parlay that into walking to the theater.

What do you eat before you go on?

I’ll maybe have a light snack two hours before a show. There’s a great deli by the theater, so I’ll get some brown rice, a piece of chicken or a piece of fish that doesn’t look too old and a coconut for potassium and to be hydrated.

How do you calm down?

I listen to stand-up comedy before the show. That gets me up for certain cadences. A lot of old George Carlin, old Robin Williams and Eddie Murphy. To calm down, I listen to podcasts, like Gilbert Gottfried’s and Pete Holmes’. It’s better than music. Music gets my heart rate up.

Is it hard to come down from a performance?

It’s impossible. I think you totally understand why there are certain people who burn themselves out. There’s no feeling like being in a show—1,500 people screaming at you, some of them asking for your autograph. The last thing your body wants is to shut down. You’re wondering, Where’s the after party? It takes me a bit to get out of everything—30 minutes for makeup and 10 minutes for the wig. It’s a strict skin regimen to stop my face from becoming one gigantic pimple. I try to warm down and then I’ll hit the stage door. I never miss the stage door unless I’m deathly ill or running to another thing. I tend to have a conversation with each person, so it’s another hour to get out of there. I live on the Upper West Side, and I usually get home around midnight. I end up going to bed around one or two a.m., whether I’m writing or catching up on some YouTube stuff. Sometimes I’ll take a Unisom or a nip of bourbon. It calms me down and lowers the shoulders.

Beetlejuice is kind of a dirty character. Does his dirty humor bleed into your everyday life?

I like to think of it as the other way around. I have a bit of a blue sense of humor—I don’t find too many things very offensive. This was comedically, tone wise, something to grab onto. It’s a lot of things I don’t say in my own life so it’s kind of a freeing exorcism.

Is this the most makeup you’ve ever worn on stage?

Before the show, I used to tell people I was allergic to makeup because I didn’t want to wear it. This is the culmination of all my lies. I wear so much makeup, it’s my wonderful punishment. I actually do like it. There’s something calming about getting it on. It’s way easier to get into a type of character like this. He’s a monster and a demon—the funds and budget to do it makes it easier to pretend.

What have you been reading?

My dresser got me the new Mel Brooks biography. I don’t tend to read too much fiction. I like biographies of funny people, books about show businesses. I’m in the middle of Adventures in the Screen Trade by William Goldman.

I watch everything. Our favorite thing to watch is documentaries. We’ve seen every documentary on Netflix. We’re up to date on Game of Thrones. Our favorite show recently was Barry on HBO. 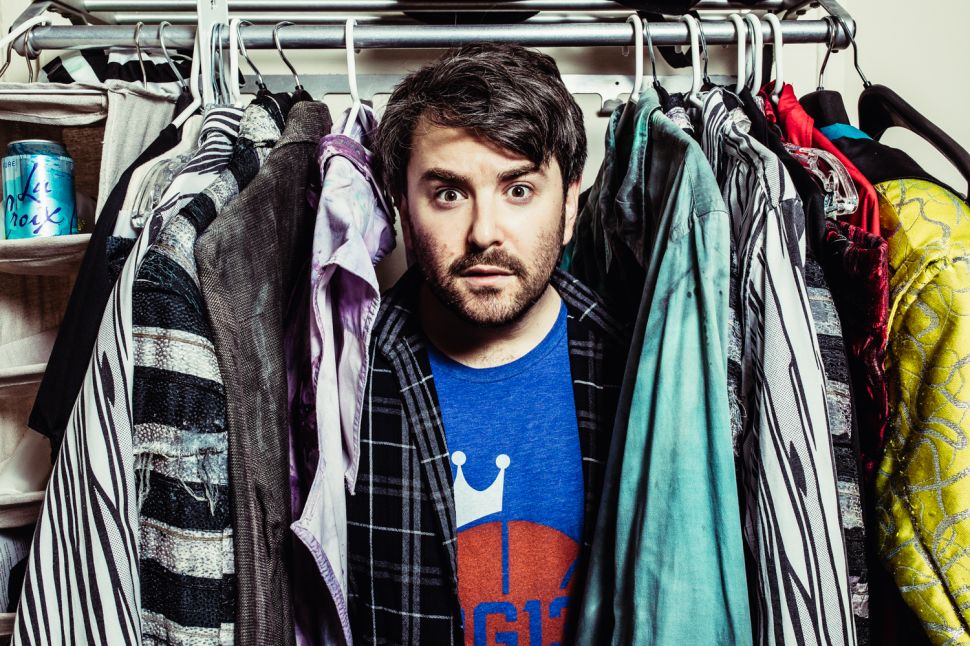