Michael R. Jackson’s audacious debut at Playwrights Horizons, A Strange Loop, doesn’t know what sort of musical it ought to be. Don’t read that as criticism; identity crisis is the engine that drives this dense, whirling gyre of code-switching satire and metatheatrical self-discovery to dazzling effect. Our plus-size, lovelorn protagonist, Usher (Larry Owens), initially sings that Loop will be a “big, black and queer-ass American Broadway show!” Later, our author is goaded by inner voices to write “a nice, clean Tyler Perry–like gospel play for your parents.” At the Broadway theater where Usher is, well, ushering, he glumly describes his work-in-progress to a friendly stranger, “[I]t’s about a black, queer man writing a musical about a black, queer man who’s writing a musical about a black queer man…” and so forth. This show can’t decide whether to lead a revolution, sell out, or curl up in a ball hurling insults at a mirror. That’s the subversive, polymorphous genius of it.

In blurbspeak, A Strange Loop (co-produced by Page 73) is like Company with musical and thematic roots in such diverse titles as Nine, Fun Home and The Colored Museum. But to describe it as such would be to deny the work’s originality and baroque self-awareness. And yet, Jackson is not writing in a vacuum; the Echerian traps sprung in A Strange Loop require an audience that can clock its myriad allusions and quotations. The title is taken from the last song on Liz Phair’s breakthrough 1993 album, Exile in Guyville (answered in Jackson’s sexual marketplace lampoon, “Exile in Gayville”). Other Phair song titles pepper the script: “Supernova,” “Mesmerizing,” “Fuck and Run.” Usher tries to channel his “inner white girl” for confidence. However, a “strange loop” is also cognitive scientist Douglas Hofstadter’s concept of how our sense of self is both illusion and reality. Jackson uses pastiche and parody for more than just knowing laughs (of which there are many); he’s studying how a person—specifically, a queer, black, awkward, radical-left, large-bodied person—is constructed by and valued in society, and how he values himself.

Usher’s problem is that he doesn’t fit in anywhere. When he seeks connection via dating apps, the “white gaytriarchy” judges him “too black,” “too fat,” and under-endowed. Snobby gatekeepers of musical-theater grants advise him to stick to safe black topics such as “slavery, police violence and intersectionality.” Then there’s his childhood, scene of the primal wound. As depicted in Usher’s mind (and it all takes place in his mind), his parents vacillate between casually homophobic frostiness (father) and overbearing, Bible-thumping self-delusion (mother). His family both acknowledges and condemns their son’s gayness, cheering on his career, but getting offended when they hear his songs, which are often hilariously profane and explicit.

God knows it’s hard to shock anyone at the theater these days, but Jackson does his level best. A Strange Loop is chock-full of squirm-inducing racial stereotypes, white sociopathy and sexual humiliation. In one particularly ugly vignette, Usher hooks up with a married, straight-presenting man (Antwayn Hopper) who hisses the n-word at him in bed. At one point Usher (echoing theorist bell hooks) calls Beyoncé a terrorist, and opines that Tyler Perry is worse for black people than diabetes—remarks that get him branded a “race traitor” by six personified Thoughts in his head (played by an outrageously versatile sextet). Besides the toxicity of white supremacy in mainstream culture, one of Jackson’s biggest targets is religious hypocrisy, embodied in his parents’ faith. A big, splashy gospel number toward the end of the show has the cast singing joyously over and over again, “AIDS is God’s punishment!” as Usher’s mother looks on in horror.

But even this narrative strand—the misunderstood artist getting revenge on ignorant, hypocritical parents (a trope that goes back at least to James Joyce)—gets interrogated as just another layer of artifice. Thought #4 (John-Andrew Morrison), drops the character of Usher’s simpering mother and deadpans, “Are you really sure this is how you want to end it, Usher? Just what are you trying to prove?” Our author doesn’t have an answer; he’s forced to admit that his real parents aren’t “Tyler Perry cartoons.” Like Bobby in Company, the hero must dive deep inside to acknowledge the emptiness. This prompts the penultimate number, “Memory Song,” a haunting, circular lament for “one lone black gay boy I knew who chose to turn his back on the Lord.”

Jackson’s catchy and well-wrought score is based in singer-songwriter rock and pop, with excursions into Broadway songcraft (Sondheim and Tesori) and plenty of rafter-shaking mock-gospel. The lyric writing is deft and cutting, studded with pop-culture allusions and sexually graphic jokes, but can turn a dime into plaintive introspection: “After church / We’re driving home / To radio crackle / Jazz muzak / Or Motown blues / And skin is a shackle.”

The seven-member cast is nothing short of heroic. In the central role, playing a man who has to go to existential hell and back (and sing and dance about it), Owens is a powerhouse, charming and sympathetic, nailing the comedy and pathos of his role with grace to spare. Playing Usher’s hopes, doubts and fears, L Morgan Lee, James Jackson Jr., John-Michael Lyles, Morrison, Jason Veasey, and Hopper provide an incredible support system, juggling dozens of characters and gliding with the material’s whiplash pivots from grotesque satire to soul-baring, confessional drama. Director Stephen Brackett brings it together with style and verve, immensely aided by Raja Feather Kelly’s seemingly bottomless bag of choreographic tricks. Between Octet, the flawed but worthy Secret Life of Bees, and now A Strange Loop, this summer is turning into a bonanza of forward-looking musical theater. “Change is just an illusion,” Usher sings, and he may be right, but I believe things are about to change for Jackson—in a big way. 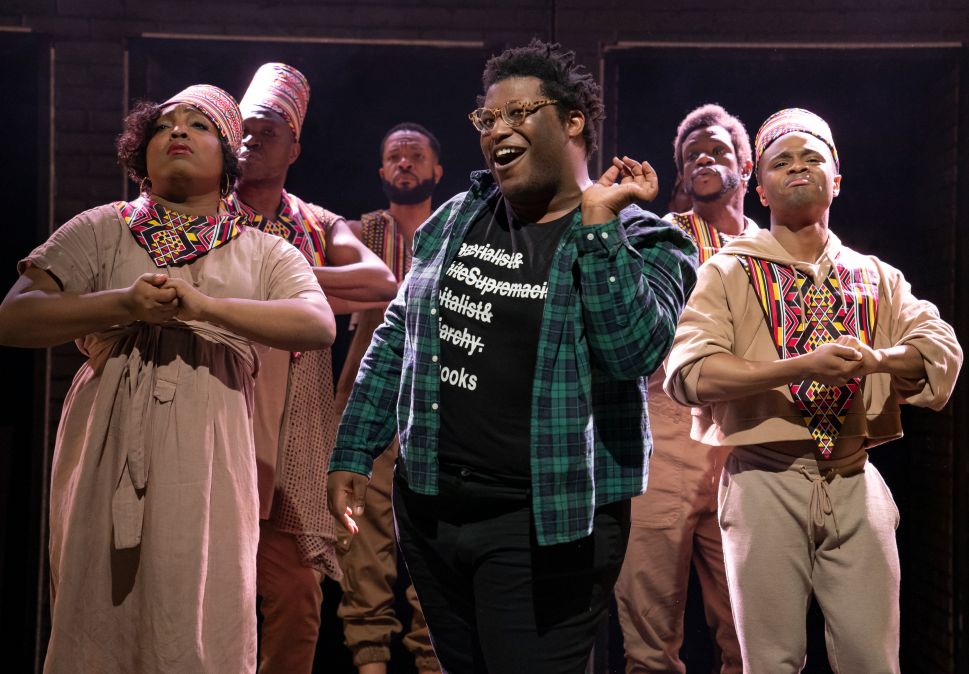