Shortly after a snooping teenager ignores the many posted warning signs and enters the famed Warren Artifact Room to gander at all the spooky stuff and maybe make a connection with a recently deceased relative, she has a choice to make. Should she open the glass case that houses the garishly smiling glass-eyed conduit to the demon realm also known as the doll Annabelle?

Most audience members in the crowded Westwood movie palace where I saw Annabelle Comes Home—the third of the films featuring the world’s least desirable Victorian plaything—murmured audibly that she should not. But the guy sitting next to me had another idea. “Open it,” he shouted, “so we can have a movie.”

That pretty well sums up the experience of seeing the second film associated with the series of movies known as the Conjuring universe to come out this year (following April’s uninspired The Curse of La Llorona) as well as the second killer doll movie released in as many weeks (following Child’s Play.) Annabelle Comes Home often feels like a fun, periodically thrilling and slightly claustrophobic horror-tinged theme park ride. It’s also, especially early on, akin to waiting in an interminably long line to get onto that ride.

But once the demons are let loose, the phantasmagoric bride starts thrusting her kitchen knife, and your seatmates stop grumbling and start screaming, the movie largely works. This is thanks chiefly to a focused script from longtime series screenwriter and first time director Gary Dauberman that cheekily reflects the drive-in popcorn thrillers from the period in which the movie is set more than it does the other films in the series. Until now, those movies had been delivering increasingly less entertainment with each new installment.

Few jobs in the 1970s required hazard pay more than being a babysitter for Ed and Lorraine Warren (after night watchman at Three Mile Island and PR person for Nixon). The Warrens are two kindly New England paranormal investigators played in the series by Patrick Wilson and Vera Farmiga; they bookend the proceedings here but are otherwise MIA from the film.

The job of watching young Judy Warren (Mckenna Grace, whose creepy-cute visage has already graced such spook fests as 2015’s Frankenstein and 2017’s Amityville: The Awakening) falls to sweet-faced Mary Ellen (Madison Iseman from Jumanji: Welcome to the Jungle). She is presented as devoted to her charge and honorable, especially compared to Daniela (Katie Sarife), her friend who pops in uninvited and serves as the dark-haired Veronica to her angelic Betty.

While Dauberman is still figuring out how to effectively build suspense (Daniela’s various forays into the Artifact Room seem to take as long as visits to the DMV), he does a good job of varying the types of scares he uses to shock his audience. He also leavens the tension with just the right amount of humor and does well with his recreation of the ’70s. (Many of those who lived through the era will find the wallpaper in the Warrens’ second floor hallway far scarier than any of the possessed tchotchkes they keep under lock and key.)

Mckenna Grace, terrific as a loner kid whose budding skills as a clairvoyant mirror her mother’s, is the one actor who stands out. She has her own very personal take on the “horror movie kid” trope, one that fits well for this twisted age in which we find ourselves. Instead of being the conduit for terror (that’s the job of the freaky looking doll), she’s the one who calmly picks up the pieces—and collects the asthma inhaler—for her idiot caretakers.

This feels like a strange thing to say about a horror movie, but there is something notably and disarmingly wholesome about Annabelle Comes Home. It takes place almost entirely in a loving home, albeit one where an attempted homicide by a ghostly spectral is such a blasé event that it hardly bares mentioning. It’s a film where even the worst of situations can be faced down with the support of friends and a crucifix; if things get extra hairy, throw in a Lord’s Prayer and a little Holy . (Stealthily, the Conjuring movies have become the most successful Christian film series in movie history.)

For all its Sturm und Drang, vomiting ghosts and demonic werewolves, what the movie ends up giving us—and for the most part, quite entertainingly—is just another bad night of babysitting. 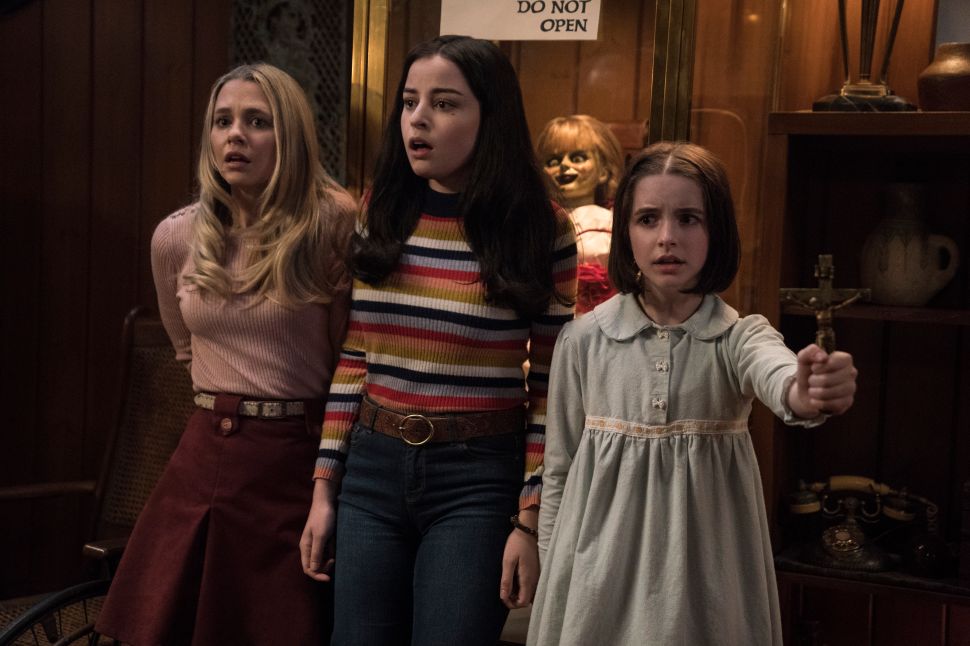