Art Basel dates back to the early 1970s, the product of a trend that started out as a grassroots marketplace set up by galleries for galleries and collectors. But the MCH Group, the parent organization of Art Basel, has transformed the entity into a juggernaut almost unrecognizable from how it started out. With outlets in Miami Beach, Hong Kong and rumors of more offshoots to come (there were plans for some other expansions, but that’s been put on ice for the time being) these are some of the best attended events on the annual art calendar.

The early years of the fair were marked by innocence as well as some rule-bending in terms of how the logistics were handled. Experience, knowledge and technology have pulled back the curtain on many of the practices involved with getting art to the fair and have modified the behavior of those who work both sides of the divide; the exhibitors and the shippers. As the CEO and founder of a fine art shipping and logistics company, I’ve seen many years of behind-the-scenes action at Art Basel. Here are some of the hurdles galleries, shippers and fair organizers face at this fair and others, and how times have changed.

The art market is an unregulated industry. Its closest comparison is probably the real estate industry, as both deal in tangible assets, but the practices of art dealers are far more opaque. This becomes very complicated, very quickly, when selling art on an international platform. When dealers sell valuable works of art to collectors, who live in other countries, some with ambiguous attitudes toward their homeland’s customs regulations, the question of value and taxes leads to an awkward exchange if both parties aren’t on the same page. I am talking about tax fraud, and this was a big part of the early years of fairs.

The first editions of Basel, and indeed many fairs, faced a problem of the value of artworks being under-declared when they were imported. When the dealers who were fudging the facts were discovered they were expelled from the fair. Working with companies from different countries (with different attitudes to rules) also posed problems—I remember seeing a venerable Swiss shipper throw a typewriter (this was many years ago) at a British shipper when he discovered that his instructions weren’t being followed to the letter. Why? Because, Swiss Customs doesn’t mess around, that’s why. That country has made itself wealthy by being a neutral entity with borders that remain intact, even post-European economic unification. In the early years, Swiss Customs would, on occasion, pose as buyers when visiting booths. When the price for a particular item did not match what was listed on their customs forms, and they discovered that the work had been hugely undervalued during the temporary import, sabers were rattled.

Today, the exhibitors are far more sophisticated, and for the most part, follow the rules. So, too, do the shippers. Those of us who handle art fair shipments are mindful of deadlines, the fragile nature of the art work and the client’s budget. All of these factors have become far more complex because there’s no longer an art fair season. Every month has an art fair, or a biennial, and the art dealers are hard pressed to get their ducks in a row with enough lead time to allow for some creative money-saving strategies; such as ocean freight. (I don’t recommend shipping artwork via ocean freight. The steamship lines are worse polluters than the airlines and they are at the mercy of the elements. And unless you pay a premium for a reefer, or temperature controlled container, the artwork will experience massive fluctuations in temperature and humidity.)

Fine art transport has become a very crowded field. In order to retain any kind of market share, you have to distinguish yourself by offering premium service or low prices. You can’t be both and survive for very long. The shippers in this game receive deadlines and instructions from their Swiss partner agents, and subsequently give the client galleries a calendar for when they need to collect the objects for packing and crating, the documents (packing lists, pro forma invoices stating values) required to complete export declarations and the last date to catch a reliable flight to the nearest airport. Once at the fair, to make matters more streamlined, Swiss Customs set up a temporary office on the same floor as the fine art handling companies.

There’s Art Basel, and its various sections, and then there’s Unlimited, the special section in an adjacent building that features large-scale and installation based work. It has a separate opening schedule, and as such, the art may enter the building earlier than the work going to the main event. As an example, this year my company, Atelier 4, worked on sending one part of Open Secrets, 2018-2019, by Andrea Bowers for her Los Angeles gallery, Susanne Vielmetter, by air freight. The other part is being delivered overland from Capitain Petzel, who also represents Bowers. This work documents the development of #MeToo and Time’s Up. It’s interesting to note that much of today’s art work promotes social reform while international commerce, the establishment of European Standards for business practices and the pressure placed on Swiss banks and Freeports mirror this need for equity and transparency.

Meanwhile, back at the main fair, long gone are the days when you installed your booth, waited a few days, and tore it down. Now, there are teams of art handlers, waiting to do a switch out, which was either coordinated by the gallery in advance, or sometimes when works have sold. At one point, some artists were refusing to let their galleries show current work from that year at a fair, and then all of a sudden, the fairs created private viewing rooms where exclusive deals, unavailable to the public, were conducted. The art handlers, many employed by the Swiss and foreign shipping companies, are ready for that action. And for the times where there’s no work for the art handler, you can see them jumping in the Rhine and riding the current downstream. A time-honored tradition.

There’s a bit of a mad scramble at the close of the fair. Some veterans of these fairs prefer to have everything travel back to their galleries and then gracefully process the transactions, which will of course require more shipping. Frequently, with the advent of useful logistics software and electronic access to customs databases, there is more “cash and carry.” In this case, there are a few options: transfer formalities from one gallery to another; transfer formalities from one Swiss shipper to another, definitively clear customs, pay VAT and organize delivery to a Swiss location; or organize onward transport outside of Switzerland.

Things can get very complex when an art advisor is on a shopping spree for their clients. That requires consolidating works from a multitude of galleries and more than one Swiss shipper. There is always at least one gallery that likes to pay their shipping bills at the following art fair, and for those lovely folks, entire shipments can also end up in storage until a settlement has been made. It’s always chaos, and if you think about how many art fairs there are, and that some of these shippers send their staff all over the world to unpack, install, dismantle, repack and do it all over again, you’d think there’d be more burn out. But these are art fair lifers, they’re kind of like carny folk or adrenaline junkies—you know the type. 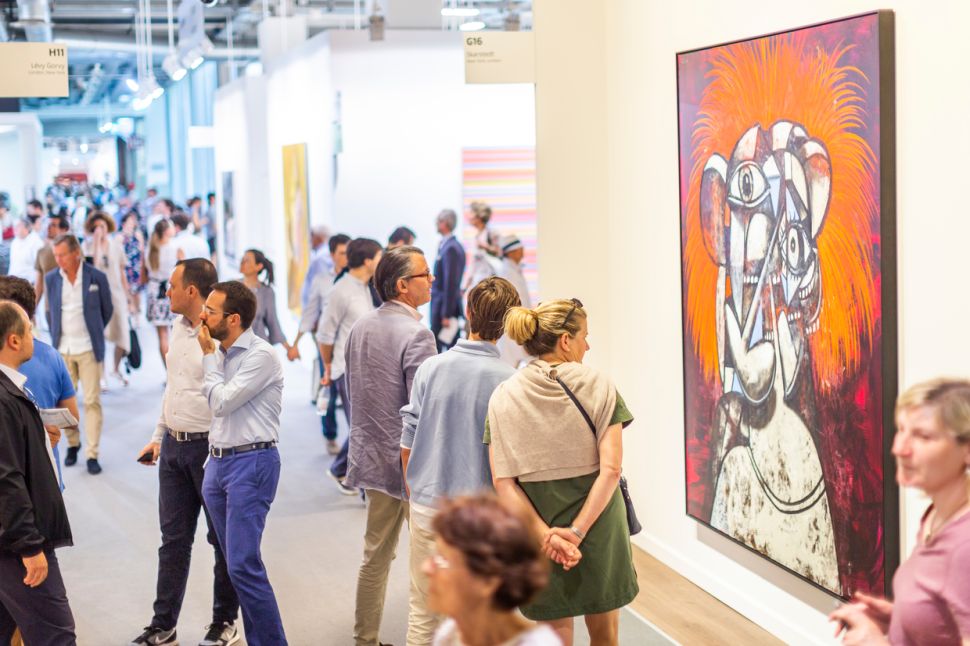