With Sotheby’s announcement that it has moved its annual fall Australian Aboriginal art auction from London to New York City, the company becomes the first international auction house to offer Australian Indigenous art in the United States. The sale, to be presented alongside their marquee November auction of contemporary art, signals big things for a market that, while existent for decades, has been quietly growing over the past four years.

Highlights of the upcoming November sale include two paintings from the early 1990s by Emily Kame Kngwarreye of the Anmatyerre community in the Central Desert area, whose delicately pixelated fields of color established her as one of the most recognized Indigenous Australian artists (she represented Australia at the 1997 Venice Biennale). The higher priced piece of the two is expected to go from $300,000 to $500,000.

The auction was previously held in Australia from 1997 to 2009 and then in London from 2015 to 2018—that six-year gap in sales attributed to a global burst in a market that, today, never seems to have been stronger. “In recent years, there has been a renewed global interest in the field driven by new private collectors and an increased presence at biennales and museum shows in Europe, Asia and North America,” said Tim Klingender, Sotheby’s senior consultant on Australian art and the lead organizer of the auction.

Indicative of the reappraisal of Australian Aboriginal art as a growing contemporary art market outside of Australia, the news from Sotheby’s coincides with a series of art exhibitions in museums and white cubes across the country showcasing the work of Indigenous Australians. Miami-based collectors Dennis and Debra Scholl, who have amassed a massive collection over the past decade, in 2017 donated 200 Australian Aboriginal works to U.S. museums, among them New York’s Metropolitan Museum of Art. This fall, the Menil Collection in Houston will present more than 100 contemporary paintings from the 1950s onwards by Aboriginal Australian artists in “Mapa Wiya (Your Map’s Not Needed): Australian Aboriginal Art from the Fondation Opale,” and, at MoMA PS1, the recently closed “Karrabing Film Collective” was the first solo exhibition in the U.S. of the indigenous media group from Australia’s Northern Territories.

Also in New York, an exhibition of Australian Aboriginal art from the collection of Steve Martin currently on view at Gagosian does a wonderful job at placing the work in conversation with contemporary art more widely. Like the Sotheby’s sale, “Desert Painters of Australia” includes works by Kngwarreye as well as more recent works by painters from the Central and Western desert regions of Australia. Despite obvious resonances to mainstream abstraction, many of the paintings refer to sites of sacred or historical significance. An untitled painting by Naata Nungurrayi, with clusters of red, orange and yellow dots, depicts the Karilywarranya in the Pollock Hills, the place she grew up, and Yukultji Napangati’s painting, “Ancestral Women at Marrapinti” (2017), features the women who made bone jewelry for the younger women who stopped at symbolic sites on their rite of passage.

Though none of the paintings at Gagosian are for sale, the exhibition marks an important a disruption to the rules of the market and how we currently think about indigenous contemporary art. “It seemed impactful to present this special and unexpected exhibition during the high season of auctions and fairs,” said gallery director Louise Neri. But does this mean we are finally on the way to appreciating the deeply contemporary efforts of many of these artists on their own terms rather than pigeonholing them?

And on the flip-side, despite the Gagosian show being deeply rooted in cultural heritage, is it problematic how non-Indigenous spaces often limit the work to its aesthetic qualities?

“It’s important to remember that—at least for Arnhem Land bark paintings and Western Desert acrylic paintings—the work was made to be sold for a market, and often with the idea of educating non-Indigenous people about their culture, their rights to land, etc.,” Fred Myers, an Anthropology professor at N.Y.U. specializing in Aboriginal Australia, said.

While art makes a substantial contribution to the economies of small Indigenous communities, there is something to be said about these works circulating in predominantly white spaces and artists’ participation in the global art market being mediated by non-Indigenous agents. Myers told me that while artists receive the profits for the barks and acrylics sold through Indigenous cooperatives, profits do not return to the makers on the secondary market, where paintings are often sold for much more. Klingender, however, argues that the living artists that form part of the Sotheby’s sale are not only aware of their place in the global art market, but “hugely enthusiastic about their art circulating beyond their home environments.”

“Art provides the greatest source of income for Indigenous Australians. It enriches culture for Indigenous people, makes political statements, and brings awareness of their diverse cultures and the issues they experience to the broader community,” Klingender said.

Sotheby’s, which has established itself as the market leader in the field of Australian Aboriginal art (it holds the record for the highest price achieved for Aboriginal art at auction and the highest overall sale total), has often taken additional steps to ensure profits benefit Indigenous communities. In 2000, the auction house held a sale of Pintupi paintings to support funding for a dialysis center in the Western Desert.

For Gagosian, the relationship to Australian Aboriginal people is more far removed, but “being the largest and most visible commercial gallery in the world, this small and exquisite exhibition has had a very positive and significant impact far beyond its walls,” Neri said.

Indeed, the expensive paintings on view at Gagosian and for sale at Sotheby’s perhaps most importantly invite us to reconsider our Western assumptions about beauty and value, maybe, even, to go a little further and understand the tradition of the Aboriginal art practice and its inextricable ties to political struggles. “Currently the field is more sophisticated than ever and appears to be at the beginning of a new trajectory,” Klingender said. “We expect prices to rise as demand and competition increases for the most exceptional works.” 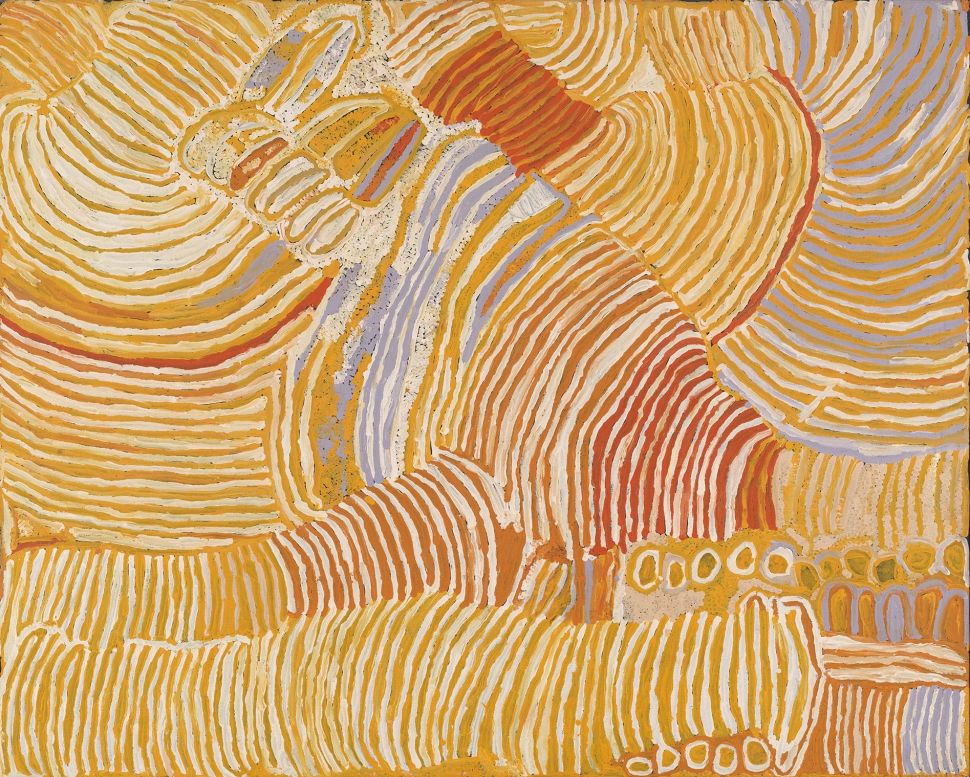