Goop queen Gwyneth Paltrow recently let the world know that she and her husband, Brad Falchuk, aren’t into that whole living together all the time thing. Paltrow explained in the Sunday Times that she and Falchuk, who got married in a celeb-filled Hamptons wedding last September, only cohabit four nights a week, à la Carrie Bradshaw and Mr. Big. We kind of love this idea, and even more so because Paltrow explained that their situation is ideal because her intimacy teacher (yup!) recommends polarity in a relationship.

But we wonder if Paltrow and Falchuk might be singing a different tune in the near future, as the American Horror Story writer and producer just listed his Brentwood Park home for sale.

Falchuk purchased the four-bedroom, 4.5-bathroom Los Angeles estate for $5.6 million in 2014, notes Variety, and he employed interior designer Windsor Smith, who also happens to have worked on Paltrow’s own Brentwood mansion, to remodel the place for him. Paltrow and Falchuk split their time between their various homes in the enclave. The single-story, 4,190-square-foot abode is now on the market for a hefty $10 million, so that must have been some serious work.

The kitchen is equipped with stainless steel appliances, subway tile backsplash, marble countertops and a marble-topped center breakfast island, plus a walk-in pantry. It opens to a larger dining area, perhaps for when Paltrow makes an appearance.

V-Day dinner last night. Thanks @jessseinfeld for the recipes. #foodswings

The formal living room contains a wood-burning fireplace with a black lacquer mantle as well as dark wood floors. A family room has its own white brick-accented fireplace, with French doors that lead to a covered patio.

The master suite has yet another fireplace, with direct access to the backyard as well as a bathroom with a separate standing tub, double sinks and a rather massive marble shower.

Outside, there’s a sleek swimming pool and spa, a sports court and a cabana.

Since Paltrow gushed about their living arrangement so recently, perhaps Falchuk is actually in the market for another Brentwood residence—we can’t imagine he’d want to move further away from the Goop guru, whose Mandeville Canyon mansion is nearby. Maybe it’s because the couple is planning on spending less time in Los Angeles this summer and more time at Paltrow’s Amagansett Hamptons getaway. Goop MKT did just reopen out east, and Paltrow surely has her hands full restocking the place with jade eggs, rose quartz rollers and sex dust for the season. 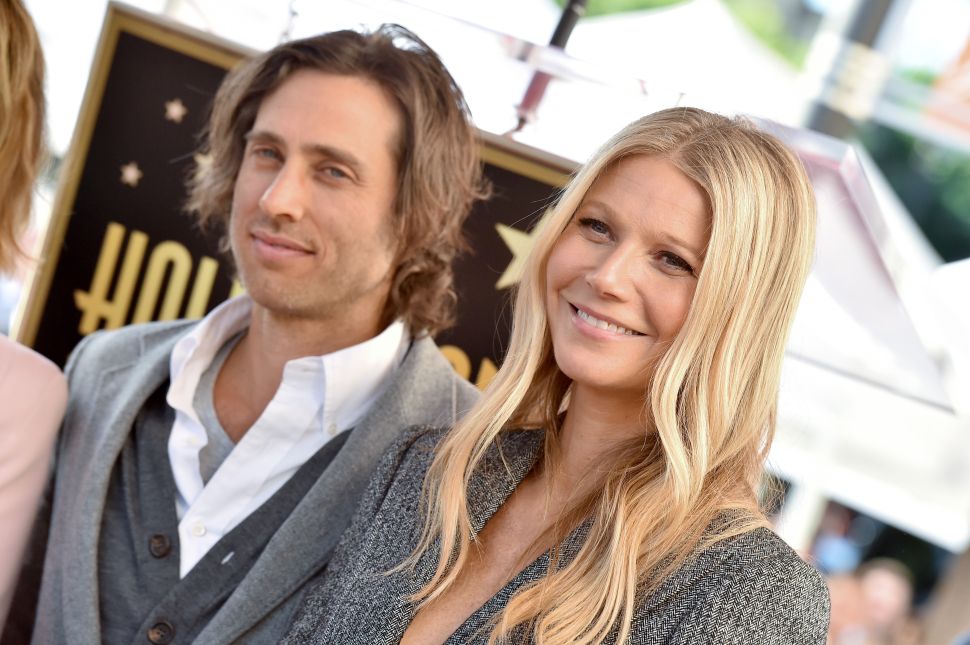