What can you expect from someone with (at least nominal) complete control over a powerful and fabulously wealthy organization and its 1.2 billion adherents as well as infallibility—as in he is never wrong, can never be wrong, an always-rightness gifted straight from the divine? Not a whole hell of a lot, if that person is the pope, the supreme pontiff of the Catholic Church, and your expectation is a religious and charitable institution able to adjust to meet the reality in which it exists rather than drawing ever deeper from a well dug during the Dark Ages.

The bar was admittedly low, as it ought to be for any outfit that systematically shielded serial child molesters so that they could re-offend, consequence-free, over a period spanning decades, in almost every corner of the globe. And lo, over the past year, the Catholic Church has managed to crawl under it. But by re-embracing homophobia, injecting itself into the gender debate and exploiting its great shame—the ongoing sex abuse scandal—as a tool for internecine power politics, the church is merely staying true to its values and its identity. And we should expect more of the same.

The Catholic Church was back in the news this month for the wrong reasons, because it is LGBTQ Pride month, and there is no progressive and secular event religion can’t try to ruin. Catholics were told to avoid Pride parades and related events because LGBTQ people and LGBTQ rights are “contrary to Catholic faith and morals” and “especially harmful for children,” as the “[p]roudly pro-life” Bishop Thomas Tobin of Rhode Island tweeted earlier this month. Tobin’s tweet went viral because he chose to tweet it rather than merely declaim it from the pulpit, but it shouldn’t be surprising. As Tobin explained in a non-apology, outre homophobia—like the homily given during Palm Sunday mass by a priest in Corpus Christi, Texas, in which he declared that “the LGBTQIA plus whatever values are not the values” of the area—is merely consistent with the official teachings of the church. All of this is in the catechism, and there are many Catholics who are just fine with it.

In more worldly dealings, the church remains a slick and secretive operator, recently convincing a German court that it has no prerogative to reveal how it spends the billions of dollars it receives from taxpayers every year.

Any disappointment or outrage felt at this return to the normal stems from false hope that things would get better—more just—and things like this would not happen, or happen less, or become marginalized and not mainstream (again). The false hope radiated from Pope Francis, the “People’s Pope,” the broke-ass-by-choice priest from Latin America elected to God’s top job in 2013. Francis eschewed the baroque luxuries in which his predecessor seemed to wallow. Francis said the right things. He said that climate change is real and a “moral issue.” He said gay people should be embraced and not condemned. “Who am I to judge?” he asked in 2013, when the notorious Vatican gossip machine spread the rumor of a gay priest working in the Holy See.

Francis even offered economic critiques. When he denounced the “idolatry of money,” the lifeblood of the market-based capitalism keeping billions of people in poverty’s bondage, could you hear a faint whisper of “liberation theology,” the “Marxist Catholicism” that helped make Latin American priests targets of CIA-connected right-wing death squads?

There was promise that Francis would be a sort of social justice warrior pope—a pejorative on the right-wing that is basically the papal job description, as given by Jesus Christ himself—and that his church would follow. It hasn’t. From the very beginning, Francis found himself besieged by reactionary elements within the church (which could also be a way to say, “the church”). Last August, Carlo Maria Viganò, an ur-conservative archbishop, landed the heaviest blow yet: In an 11-page letter, he accused Francis of participating in the modern church’s most profound sin, condoning and hiding priestly sexual molestation. Francis denied the accusation, but it was a clear sign of “war” against Francis by church conservatives—and it is working.

Last week, the Vatican issued a document on gender, in which it declared that trans and gender-fluid people are “confused” and that gender is not a construct or a “choice” but a God-given identity issued at birth.

It’s tempting to credit Viganò’s broadside with shaking Francis’ faith, but the letter merely followed other signs that the pope wasn’t so woke—or at least his wokeness was susceptible to a revolt in his ranks. In January 2018, eight months prior, the pope dismissed credible accusations of child abuse against a Chilean priest as “calumny.” Gender theory, in particular, has been a bête noire for Francis, who has blasted academia for introducing notions that threaten the family.

This is not to say that Francis is so craven or so susceptible to palace intrigue that he has lost all faith. Last week, Francis repeated earlier condemnations of an economic system that finds “new ways” to keep poor people “in bondage.” The pope would not be down with the gig economy. He is not the problem. The problem is his institution and trends identified by social scientists in healthy religious institutions. Religions that are rigid and inflexible and reactionary attract and keep adherents. Religions that are open and welcoming and pluralistic shed followers. This is partially why the church is re-embracing wildly unscientific practices, like exorcism, even as Francis preaches data-driven acknowledgments of climate change.

This path is a straight line heading only one way. You must think of any church first and foremost as a business. (If you disagree or doubt, spend a couple of Sundays in prayer and count the number of times you are hit up for money.) Businesses need customers to keep the lights on and to buy fancy robes and candles and stuff and to maintain a real estate portfolio that has been the envy of the most vain potentates the world has seen. Wokeness is death, and you would be a fool to believe the Catholic Church is interested in that particular eschatological method. The Catholic Church on view this month, petty and ugly and venal, is the Catholic Church, and will be ever thus. 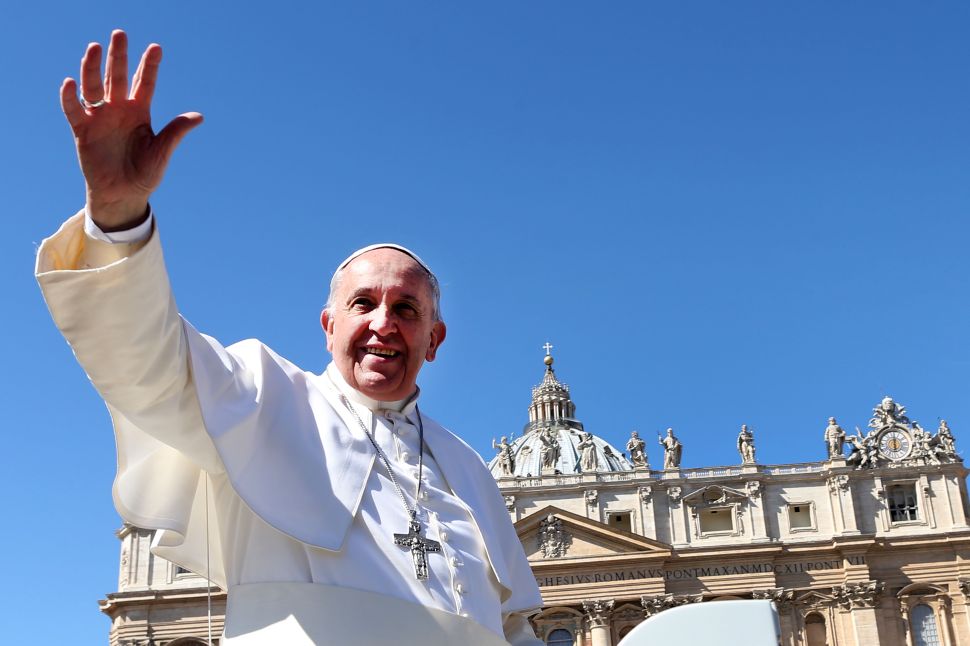