Dawns now the summer of Chernobyl. Bookings for tours of the ruined nuclear reactor, site of the world’s worst commercial nuclear-power disaster and already a thriving vacation attraction, are up as much as 40 percent, Reuters reported on Tuesday.

The sudden spike in demand is all to do with Chernobyl, the HBO miniseries that concluded its five-part run on Monday night and, in the breathless words of the UK Sun, possibly the “greatest drama of all time.”

This summer, more people than ever before will pay about $100 (for now, the price may yet rise) for a day-long guided bus tour. They will peek into abandoned Soviet-era concrete apartment blocks and, from a distance, peer at the entombed reactor itself. They will gawk at piles of eerie abandoned dolls and gas masks, some looking as if they have been deliberately and strategically dumped there for maximum effect—the better to capture the perfect ghoulish vacation snapshot, an authentic horror massaged for the stage, like a Civil War battlefield portrait.

Tours also include stops at the “Bridge of Death,” an overpass in Pripyat, the city built to house Chernobyl workers which was permanently evacuated 36 hours after the disaster. The bridge offered a commanding view of the power plant, making it a natural gathering place in the early morning hours of April 26, 1986 for locals to watch the multicolored glow of the exposed reactor core angrily fissioning into the night sky. Everyone who did catch the show from the bridge later died from radiation exposure.

Or so the story goes. The killer bridge could be an urban myth—an admission made by even The Sun, an outlet not known for truthiness or circumspection. Nobody really knows, just like nobody really knows how many people have died because of the disaster. The UN thinks 9,000, the Belarusian government and Greenpeace think it could be 110,000.

The real number is as unknowable as it is irrelevant. The thing about Chernobyl, and Chernobyl, is that the story of the disaster and subsequent response needs absolutely no embellishment—and no heroes nor villains—to make a compelling drama for prestige television.

A firefighter’s slow and agonizing on-screen death due to radiation poisoning, in which his body becomes a single oozing wound, is a sanitized version, toned-down for the audience’s sake. We do not see him coughing up bits of his lungs and liver. Though it happened, it is not necessary to see in order to know what happened was ghastly and terrible beyond most powers of description.

These observations, and the spike in tourism, and the various petty stretches of the truth, are all frightfully banal. Banalities are bromides, predictable and neat and easy to swallow. For these reasons, we humans love them. Love conquers, the truth shall set you free, let the market decide. We really love them in our prestige television. Banalities free you from having to think too much or feel too uncomfortable or too unsettled or unsure. “What was that all about?” is bad; “That was what that was all about” is the thing.

This is all normal human behavior. “We live in an environment of banality,” Svetlana Alexievich, the Nobel Prize-winning author and journalist, once said in describing her work.

Alexievich, who lives and works in Belarus, where millions of people still live on land contaminated by Chernobyl radiation, is the author of Voices From Chernobyl, an oral history of the catastrophe response and a key source document for the miniseries.

It’s not yet clear what Alexievich thinks of the series. The Belarus-based news website Charter 97 reported last month that she’d yet to see it. But some of the analyses in the English-language press in the West, which watched the disaster unfold in 1986 with a mix of relief and schadenfreude, some version of “phew, at least it’s those Soviets and not us,” traffics in the banal.

For the Daily Beast, Chernobyl is not an indictment of nuclear power or of universal human frailties—it is a Cold War “I told you so.” The “ultimate culprit” is “the stubborn, arrogant, blind and foolish Soviets, whose communist culture… compelled everyone to cover up the truth lest they be vilified as nation-besmirching traitors.”

In The New York Times, science writer Henry Fountain laments the show’s limited “Hollywood treatment”—Emily Watson’s character is a composite—but does praise the show for “getting a basic truth right—that the Chernobyl disaster was more about lies, deceit, and a rotting political system… more the fault of a government and its apparatchiks” than anything else.

One big reason why “it’s the [Soviet] system, man” would be the take is Mikhail Gorbachev himself, the general secretary of the Communist Party who suggested in 2006 that the disaster was the real turning point in his country’s dissolution—and not an economic competition it had been losing for decades, nor the disastrous war in Afghanistan, or Stalin’s terror or purges, all things that produced just as many lies as the power plant disaster.

Chernobyl is guilty of causing some of this confusion. As if tailor-made for the deadening mendacity of the Trump era, from Jared Harris’ opening lines the show creates a truth-lies binary—an “us vs. them,” “good vs. evil” dichotomy lifted straight from the Cold War. “What is the cost of lies?” asks Harris’ Valery Legasov, the closest thing Chernobyl has to a hero. He answers himself: The cost is that the truth is lost forever.

This suggests the “truth” is knowable at all, if not known, and to know it and to speak it is to be right. To do otherwise is to be wrong.

There are some incontrovertible facts. It is impossible to argue that the Soviet Union did not fuck up at Chernobyl, and do so at a grand and permanent scale. The design flaws in the RBMK-1000 reactor, the only nuclear-power generators without a containment structure and with control rods that, when inserted, actually spiked reactivity, are all real and real problems that made the disaster possible. The Soviet political system’s paranoiac nature—its insistence on being right, and the belligerence with which it sought to avoid being mocked by the West—also played a huge role.

This is part of the cost of the civilian version of “mutually assured destruction,” the great nation-building competition between the Soviet Union and the United States, a game both countries played at great cost to its people. As many as 690,000 people may have died from exposure to above-ground nuclear testing, a number far higher than government estimates—and this is in the United States. There were two huge fires at the United States’s main factory for assembling plutonium weapons, located upwind from Denver, which narrowly avoided a Chernobyl-level disaster—facts hidden from the American public by the U.S. Atomic Energy Commission.

But pointing out “we lied about nukes, too” is whataboutism. It is also banal.

“For most people, [banalities are] enough,” Alexievich told The New Yorker’s Masha Gessen. “But how do you get through? How do you rip off that coating of banality? You have to make people descend into the depths of themselves.”

This is how Chernobyl should be seen—not as a victory lap against communism, or a heartening reminder of a triumph over an old departed rival, or some kind of eschatological struggle between truth and lies and how to separate one from the other in an inevitable victory. The “truth” is in the separation of experience from myth. The truth is that Chernobyl is an ongoing disaster. So is carbon emission-induced climate change, which there is more of since the Chernobyl disaster scared the world off of nuclear power. It is a complicated monster with many heads—some that should look like mirror images—and that should be enough. 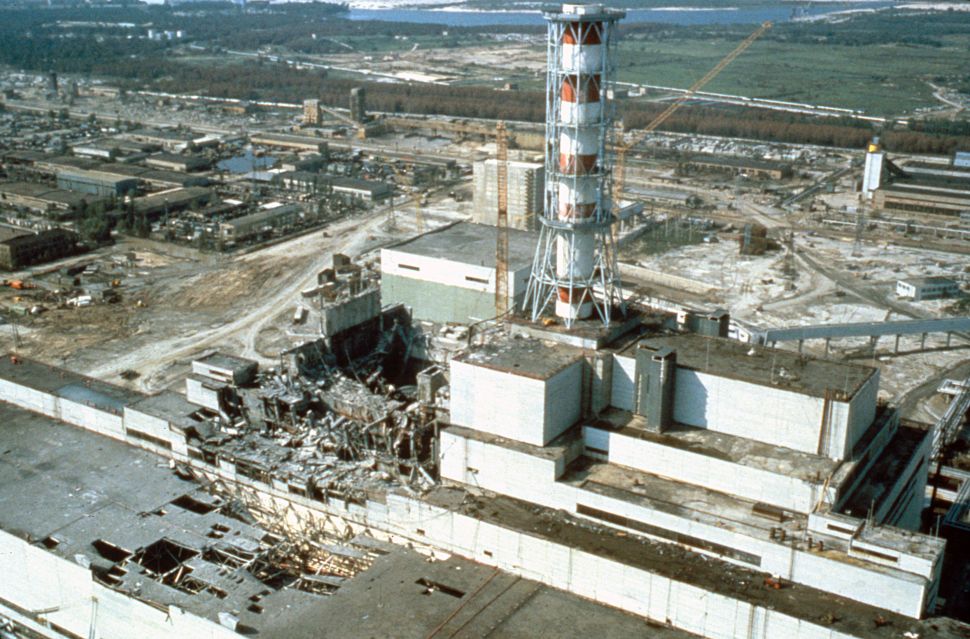