This weekend marked the release of The Dead Don’t Die, director Jim Jarmusch’s zombie horror-comedy that, in its ads, boasts “the greatest zombie cast ever disassembled.” Among that cast is the eternally cool Chloë Sevigny, who plays a small-town cop alongside other big names like Bill Murray, Adam Driver, Tilda Swinton, Danny Glover, Steve Buscemi and Selena Gomez. For Sevigny, the gig adds to her solid roster of arthouse flicks (to this day, she’s essentially never done a big Hollywood movie), and it also let her add another comedic notch in her belt. The actress, who’s basically been an icon since her breakout, 1995’s Kids, shook the world, talked to Observer about the freedom of prosthetics, her New York experiences, her famed ties to fashion, and what truly scares her: the mindless zombie apocalypse we’re already living in every day. [Some light spoilers ahead.]

Observer: Why did you sign on to do The Dead Don’t Die?
Chloë Sevigny: Because I saw Jim Jarmusch’s Down by Law when I was in high school and fell in love with him and his movies—or at least who I thought he was through watching his movies.

What was the funniest part of making the film?
Listening to Jim tease Adam Driver on set. Since Adam works in some more mainstream movies, I think Jim likes to tease him, like, “You’re gonna move to Hollywood, and buy a $2 million dinosaur bone, and drive a certain car, and wear your hair a certain way…”

Who made you laugh the most on set?
Adam! He’s very reserved, but then when he gives you something, it’s very funny. One would naturally think it was Bill [Murray], but I think it was Adam. He and I had our own little in-jokes running, while also confiding in one another about how we were feeling about certain things, so we had the most dialogue going outside of shooting. He made me laugh a lot.

How did it feel to play a zombie?
I loved being a zombie! That was one of my favorite things. I didn’t feel the need to…well, I have a lot of hang-ups on my looks, like all people do. And having that makeup on was like, I don’t even have to think about being pretty, or attractive, or any of those things. It was very freeing.

What’s your favorite thing about the film’s subtext, and what it says about culture?
That we need to be more aware of our consumerism, and our relationship to material goods, and to one another—how we connect or disconnect with other people. Even the people who are alive in the film show how we need to relate to each other and have empathy for one another. One character offers a message about finding the beauty in every day, and that’s as much of an overarching theme as the fear of environmental catastrophe.

Going back to your early days in New York, before Kids, and before you were discovered, what are some vivid memories that stand out?
When I was still living in Connecticut, I started hanging out in the city between sophomore and junior year of high school, and then, in the summer between junior year and senior year, I had an internship. I remember my route would always be the 6 train to St. Marks, and then the direct route down Broadway to Washington Square. I kinda remember mapping the city by vintage stores, and going to Canal Jeans and the Antique Boutique.

Was there a moment when you felt like you had really made it?
I think I always felt like I was an actor. After Kids came out, there was a lot of tension, and luckily, I turned to Cary Woods, the producer, because all these people were approaching me and I didn’t really know how to navigate it. He set me up with a manager and an agent at William Morris. I think that’s really important and people don’t talk about it enough: When you use unknowns, how do you help with the follow through? How do you help them navigate opportunities and avoid exploitation? I was lucky to have people around me who I could turn to, and also be able to turn other people down.

Did 1999’s Boys Don’t Cry feel like a turning point for you? It earned you an Oscar nomination.
No. I wouldn’t say it was a turning point. It didn’t really change anything for me. I feel like times were changing, as far as how people were receiving information. The internet was growing. One thing I do remember from that time was thinking, Whenever I appear in a tabloid magazine, I’m going to quit acting. Thankfully, and obviously, that didn’t happen.

So what was a turning point for you?
Doing [the HBO series] Big Love, and finally finding some real confidence in myself to, for instance, try comedy. I felt like my character on that show was very funny, and [the creators] wrote toward that strength for me. I felt more confident to try new stuff, and that felt like a personal turning point as far as growing as an actor. I also got to live with a character for longer, and make more money, and buy a home, and not feel like I was living paycheck to paycheck.

What was the key lesson you learned about polygamy while working on Big Love?
There wasn’t just one. I read a lot, from books about women escaping to pro-polygamy books. I can say that, in Big Love, we [the wives] were three consenting adults who chose that lifestyle, which is very specific to the show. But there’s also the fact that there are women like this who are imprisoned, in the middle of our country. They don’t even know who the president is. It’s heartbreaking that these women can be so removed in this day and age, and they have nowhere to turn. That we’re still allowing that to exist as a society is mind-boggling.

Jumping back to New York, how often do you spend time in, or visit, your brother Paul Sevigny’s nightlife venues?
Not enough! [Sighs.] I wish that I was more interested in going out and drinking and dancing. I’m just not that interested in it anymore. I mean, I’m, like, 44 years old! It’s not that it isn’t fun, it’s just like, getting a crew together is hard because everyone’s busy, and I want to go to bed early now! In my late 20s and early 30s, I was out every night until about 4 a.m. When I do go, though, I always have fun, and I think my brother is the best at creating these environments that feel lawless, in a way. There’s a recklessness and an abandon that people can have in his venues. My friend had an art opening recently, and we went to a dance party after at Paul’s Casablanca, and it was one of the funnest nights I’ve had in a really long time. People were rolling around on the ground and standing on tables. It was amazing.

How tired are you of talking about the fellatio scene at the end of 2004’s The Brown Bunny?
I’m probably more tired of talking about Jay McInerney’s “It Girl” article in The New Yorker [which ran in October of 1994, when Sevigny was first coming up]. With The Brown Bunny, I still find it odd that it garnered as much controversy as it did. [Director and co-star] Vincent Gallo is very much a provocateur, but there were movies that came out around that time, and not that long after, that I thought were equally as provocative. And those people and those movies weren’t as raked over the coals as we were.

So…fashion. You’ve been a model, a designer, and a style icon to many. How would you describe your style right now?
I always say I’m, like, a little punky-preppy…something like that. Alternative? But not? I don’t know. I find myself becoming more conservative these days. But that’s OK.

What was your favorite thing about collaborating with Opening Ceremony in 2009 and creating your own collections?
Learning to communicate ideas. Because now I’ve been directing, and having had to put together the fashion shows, and the performances around my collections, and articulating what the collections were about, and doing all the imagery—there was so much stuff that went into each of those collections. And I’ve taken the skills I’ve learned from doing that and applied it to pitching short films that I’ve written and directed, and to articulating those ideas, too.

Looking at your upcoming film projects, please tell me what The True Adventures of Wolfboy is.
That’s a film starring [young actor] Jaeden Martell, and it’s just a really sweet script about a boy looking for his mom, and I have small role in the end. I just loved the director’s pitch. But I don’t know if it has distribution yet. We shot it a while ago at this point. Near Niagara Falls, which was awesome.

So finally, back to The Dead Don’t Die, who in our culture do you think is a zombie?
I think we’re all kind of living the zombie apocalypse with our phones now. You see memes where everyone’s looking at their phones on the subway, walking down the street—it’s shocking! And in clubs! Including my brother’s clubs. People aren’t present. I’m guilty of it, too, but I do try to pull over. I try not to walk and look at the same time. I also like to leave my phone at home a lot when I’m running errands, which is hard to do. But the prevalence of people on their phones, everywhere, all the time, frightens me to no end. 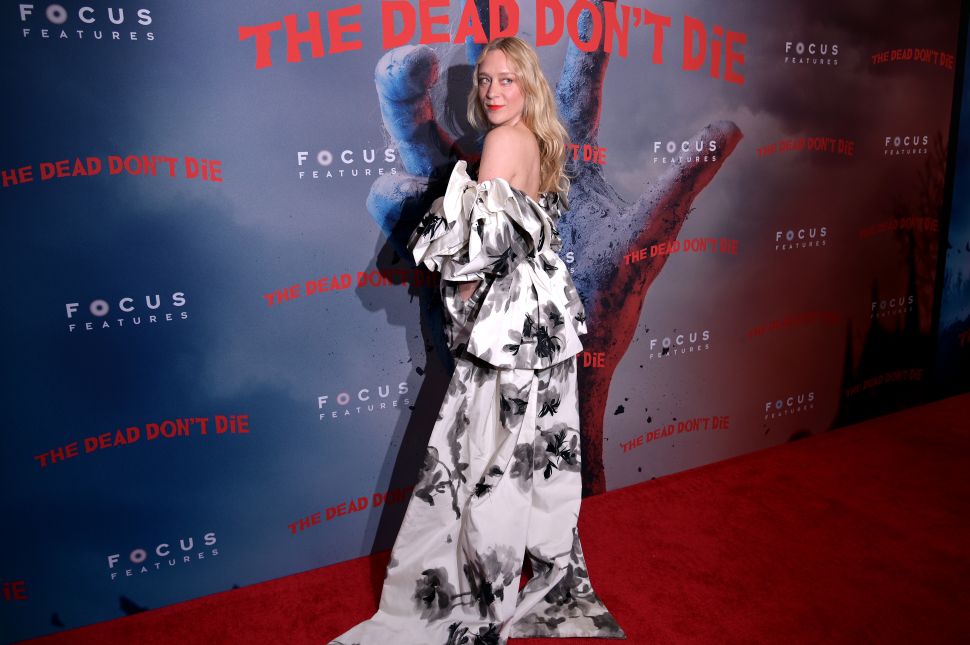