Can machine learning keep art buyers from making poor investments? No evidence points to this eventuality, but the mere possibility of minimizing costly mistakes is at least partially responsible for the near feverish pitch developing around artificial intelligence. The Art Newspaper’s Margaret Carrigan confirmed this observation last week in her article “A crisis of faith: is Big Data the art world’s new religion?” citing a growing number of user-friendly “intelligence” reports, listicles and explainer articles as evidence of the market’s increasing obsession with quantifying the market. We’re not yet at the point where machine learning takes over curation, but some are already considering those possibilities.

“What will the life of a specialist look like with a predictive analytics?” asked Christie’s photographs specialist Anne Bracegirdle over the phone with Observer last week, half-joking that emerging technology could put her out of a job. Bracegirdle and Christie’s Continuing Education program director Marisa Kayyem have been thinking a lot about these questions as the co-organizers of the Christie’s Art + Tech conference. Slated to launch June 25, the daylong event focuses on the intersection of art and artificial intelligence, taking a two-pronged approach that looks at both making and selling.

SEE ALSO: Why the Sudden Spotlight on Australian Aboriginal Art?

Attendees seeking exposure to new art will have a chance to preview Yugen, a film of sorts that self-generates visuals, directed by Martha Fiennes and featuring actress Salma Hayek. Also on view will be a two-day show curated by Kelani Nichole including the artwork of artists such as Theo Triantafyllidis and LaTurbo Avedon. The panels, meanwhile, cover topics such as AI predictions for the art market, AI as creative process, and the future of museums, and feature just about anyone important in the field, including Whitney curator of digital art Christiane Paul, MIT Technology Review editor-in-chief Gideon Lichfield and Google Arts and Culture U.S. lead Simon Delacroix.

“We think of [the conference] as an education,” Bracegirdle explained. “The people speaking are thinking about the ways in which emerging tech will influence institutional and private collecting. How will the future of museums change with predictive analytics? What will the life of a specialist look like with predictive analytics? How will authentication and expertise evolve with AI, providing more detailed nuance to image recognition and object recognition?”

The technology, according to Bracegirdle, has the potential to transform the industry. “We just had a meeting yesterday with some people in Switzerland who are using machine learning that can identify different hands within a single painting.” Kayyem said. The ability to identify works produced by studio assistants not only offers a more complete understanding of the art, but can impact its value. “It blew our minds.”

One goal of the conference might simply be to speed up the transformation of the business through education and networking. “Not to put you on the spot, but have you heard of Google’s Artist and Machine Intelligence program?” Bracegirdle asked me. I had not. But until recently neither had Bracegirdle or Kayyem—which, as they see it, only further demonstrates the need for the conference. Google’s program brings artists and engineers together to realize projects using machine learning. (The group just announced a new grant that will award six artists $10,000 and pair artists with their engineers.) Both Christie’s and Google see a benefit in those artists participating in what Kayyem calls a more “traditional viewing experience.”

Google requires its sponsored artists make their code open source, a social benefit too rarely discussed in conversations about art and A.I. More often, the market centers art and A.I. conversations around connoisseurship. If the machines that transformed the music industry can already predict and make sounds we like to listen to, why shouldn’t the same be true of art? Indeed entrepreneurs and art investors found the appeal of this idea so compelling, that it provided the founding premise of Artsy, a database founded in 2010, now with more than $100 million in venture capital funding.

But after close to ten years of operation, Artsy does not appear close to producing a genome that can replace the human eye—a measure of how much work lies on the horizon. “I feel like we’re literally in the AOL dial-up stage,” Bracegirdle remarked. “My hope is that the conference will give people a flavor of how these tools can really transform what we do.”

Update: An earlier version of this article named Peter Burr as one of the participating artists in an exhibition. He is no longer involved in the show, and the story has been amended to reflect this change. 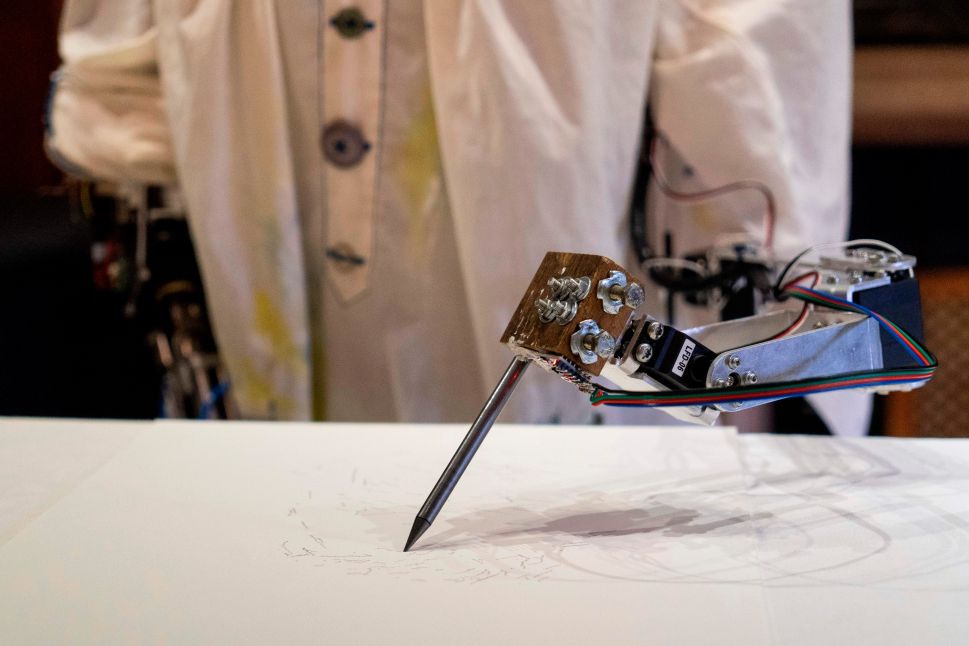