It only happens one night a year. The streets of a London area stay up until the early hours of the morning, activated by artistic intervention. On view June 22, this year’s edition of Art Night London will be taking over the towns of Walthamstow and King’s Cross.

Culling together a cutting selection of 12 contemporary artists to transform churches, shops, pubs and alleyways, curator Helen Nisbet was careful not to impose or “just parachute in” but rather, respond and work with the neighborhood. Rarely does art have the chance to so totally take over the places normally reserved for public use—usually it’s tucked nicely away in a gallery, in a properly zoned area of public space or in vast expanses of otherwise unused land on the fringes of residential areas. Here, it’s in your face (something that artists have made good use of, like Bosco Sodi’s border wall erected just up the road from the U.S. embassy at last year’s edition).

A small spark of inspiration for the theme of this year’s iteration came in the form of a music lyric, “Don’t you worry, ‘cos it’s alright, don’t you worry, child of the night,” courtesy of ‘90s pop boy band East 17.

“I was interested to know what it would look and feel like to work together with care and solidarity and trust and to think about alternative solutions together,” Nisbet told Observer. Artists were encouraged to think about the future and how our communities can be supported in the face of our current political uncertainty—conversations that are already happening around the world. But as Nisbet notes, within that dialogue, “one of the key things is over whose voice gets to be heard.”

American artist Christine Sun Kim (you may know her from her popular 2015 TED talk), who has been deaf since birth, is no stranger to having a voice that society doesn’t allow to be heard. In her experimental practice, Kim interrogates our understanding of language and preconceived ideas about deafness through performance, video, sound, writing, technology and drawing.

For Art Night, she collaborated with students at Frank Barnes School for Deaf Children in King’s Cross, interviewing then turning their comments, voices and declarations into a multifaceted three-part installation.

“In some ways, of course, it’s about recognizing a marginalized group, but another point to be made is that we’ve always had a voice but there’s just this hierarchy of languages that don’t allow us to be heard, in a way,” Kim told Observer in a recent Skype conversation through her translator, Beth Staehle.

One part of the work has incorporated the kids’ voices into a booming soundscape. Created in collaboration with musician and producer Matt Karmil, recordings of the children vocalizing noises, yelling and laughing were weaved into a bassy score that viewers can feel reverberating in their bodies. Located in the new COS concept store, the sound piece turns the space it into a sensory-rich environment for anyone to experience.

“I wanted children to be able to feel their voices and know they can activate a space of that scale because their voices have a lot of value,” Kim then laughed “Maybe [the piece at COS] is more of a love letter to the deaf experience or deafness.”

Another piece is a large-scale billboard with a declaration that celebrates the benefits of speaking sign language displayed at Lewis Cubitt Square. “If sign language was considered equal, we’d already be friends,” it reads. The phrase was distilled from a common sentiment the group of seven- and eight-year-olds expressed in her interviews with them after asking questions like “Why do you sign? Why do you think sign language is important? Should everyone learn how to use it?”

“It shows the children’s desires to connect to other people and I think it speaks more to the fundamental level of our language, our identity,” said Kim.

It’s a nice image of the future, which goes along with one of overall vision for Art Night. Along with love and hope, Nisbet asked artists to consider these when creating their pieces.

Though a hopeful tone sets the scene of the festival, Nisbet’s vision was to remain realistic, critical and not overly optimistic.

When it comes to the future of the Deaf community, Kim says she has “no idea what the Deaf and signing community will look like in 50 years and it’s kind of scary.” The uncertainty comes from the closing of deaf schools as they face budget constraints and technological advancements.

The last part of her commission is a 10-channel video installation in Coal Drops Yard, which takes recordings of four- to six-year-olds who answer questions like, “When you wake up in the morning what’s the first thought that comes into your head? What do you really get angry about? What makes you happy?”

Their responses were accompanied with visuals of British Sign Language finger spelling and the nostalgic imagery of Sign Language textbooks and reading materials. Through these visuals, Kim aims to preserve them and help prevent the cultural erasure of deaf history.

“The schools have such rich materials that seem to disappear,” says Kim. “In the back of my mind there’s a desire and a need to document these deaf schools.” 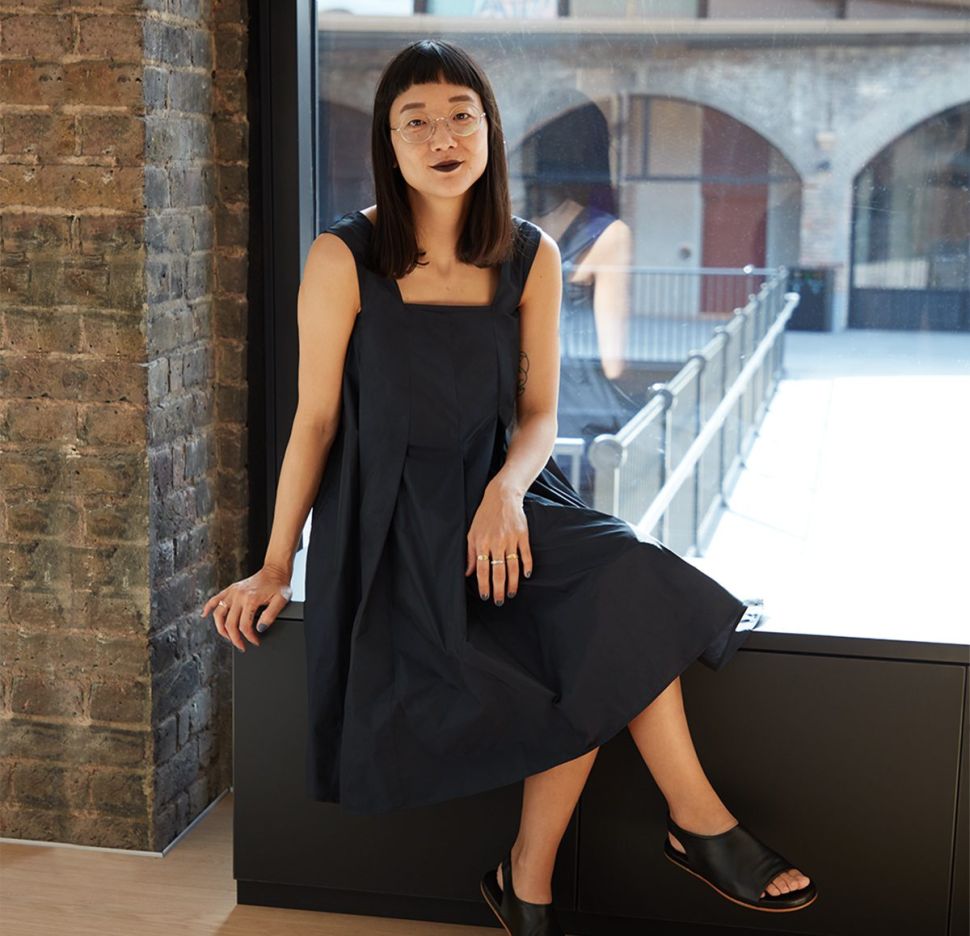