Little did President Donald Trump supporters know that when they elected him to “drain the swamp” they would set off a civil war between the entrenched elite in Washington. No one has seen a conflict like this for over half a century.

The term “Brahmin” has long been borrowed from the Indian caste system to describe the very upper strata of American power, economic and political. A “Boston Brahmin” was a well-known phrase used to describe the inner sanctum of influential families.

What we are witnessing now in the capitol is nothing less than a war as vicious and as ugly as the one Senator Joseph McCarthy set off in the early 1950s. It’s arguably worse now because McCarthy was never a core member of the elite. McCarthy promoted the idea that the Brahmins in the State Department and the armed forces were communists. He said Ivy League schools were breeding Marxists who were sympathetic to Soviet expansionist goals.

Trump supporters lined up to storm the Brahmin beaches have their own term for those to be taken down. That term is “deep state.” That is where the hyper elite reside.

Trump, as we know, promised to upend the Washington establishment. He has succeeded, probably beyond even his wildest dreams.

A typical Washington Brahmin graduates from a New England prep school and Ivy League college, becomes an attorney at Skadden, Arps, Slate, Meagher & Flom or its equivalent, and from there works for the Attorney General’s office, CIA, Justice Department or the Department of the Treasury. Their demeanor is serious and sober, rooted in family and community. One way to visualize Brahmin demeanor is to look at its opposite, Rudy Giuliani. He was never a Brahmin: brash, loud, a self-promoter and mired in nasty public divorces.

No one at Fox News qualifies, save perhaps Chris Wallace. Brahmins do not appear partisan or rabid. That is simply not done. If you were to pick a member of the media elite who might represent the Brahmins, it would be the Victor Davis Hanson of yesteryear. (Though he was once rational, he is now firmly in the bring-on-the-guillotines school.)

There is a good deal of schadenfreude here too. It is great fun and a ratings bonanza for media personalities like Lou Dobbs to formally take down civil servants like Robert Mueller and James Clapper. Often it is an unknown Brahmin like Bruce Ohr, the Harvard lawyer and Justice Department fixture, who can be dredged up for a Fox News flogging.

The anti-Brahmin tigers like Sean Hannity and Laura Ingraham, unleashed by Rupert Murdoch to bring down the establishment, are something to behold. At no time in American history can anyone recall such unapologetic, ceaseless accusations from a powerful media that a conspiracy to derail an elected president by the deep state is in effect. No institution is immune, including the CIA, FBI and the Justice Department. Fox News makes William Randolph Hearst’s “yellow journalism” and its accusations against the establishment look quaint.

So, who are the main combatants in the Brahmin war? On one side, and clearly the general in charge, is Attorney General William Barr. He has lobbed some giant shells against the Brahmin edifice. His accusations of “spying,” his assertion that “resisting a democratically elected president” is leading to the destruction of our institutions,and the appointment of fellow Brahmin John Durham are a clear signal a full assault is to come. With a resume containing Columbia University, the elite law firm of Kirkland & Ellis, the CIA and a stint as President George H.W. Bush’s attorney general, Barr is the very embodiment of the elite. Yet, Barr has broken ranks, siding with Fox and Trump, and is pursuing a civil war—now known for its incivility.

There is no one else as prominent leading the charge. Elected politicians don’t count. The Lindsey Grahams and Devin Nuneses are in the next caste down. They come and go with election cycles; they need to pander to the masses. They self-assign and can be counted on to do the dirty work, like voting for former President Bill Clinton’s impeachment, but are never to be confused as having lasting Washington power.

The Brahmins on the other side of the divide are numerous and well dug in. They have come out of the shadows of city and country clubs to become household names: Robert Mueller, James Comey, Rod Rosenstein, John Brennan, James Clapper, Andrew McCabe, Christopher Wray. Depending on which cable news channel you watch, these men are either traitors or heroes.

The venom is real, the gauntlet thrown, war has been declared. There is no room for compromise when ex-CIA director John Brennan, speaking about President Trump, says, “When the full extent of your venality, moral turpitude, and political corruption becomes known, you will take your rightful place as a disgraced demagogue in the dustbin of history… You may scapegoat Andy McCabe, but will not destroy America… America will triumph over you.”

As of now, there does not appear to be a Brahmin for Trump anywhere as powerful as Attorney General Barr. No one in the CIA, FBI, Justice Department or State Department has come out and said the entire investigative and legal establishment has “spied” on the Trump campaign. Those accusations may come later, as Barr continues to uncover more FISA (Foreign Intelligence Surveillance Act) dirt.

Either way, Washington will never be the same. The great disruptor from the real estate industry of New York and Atlantic City, by way of Hollywood and reality television, has brought his thought grenades to D.C. and lobbed them into the formerly somnolent Brahmin enclaves.

Stay tuned for the fight of fights. 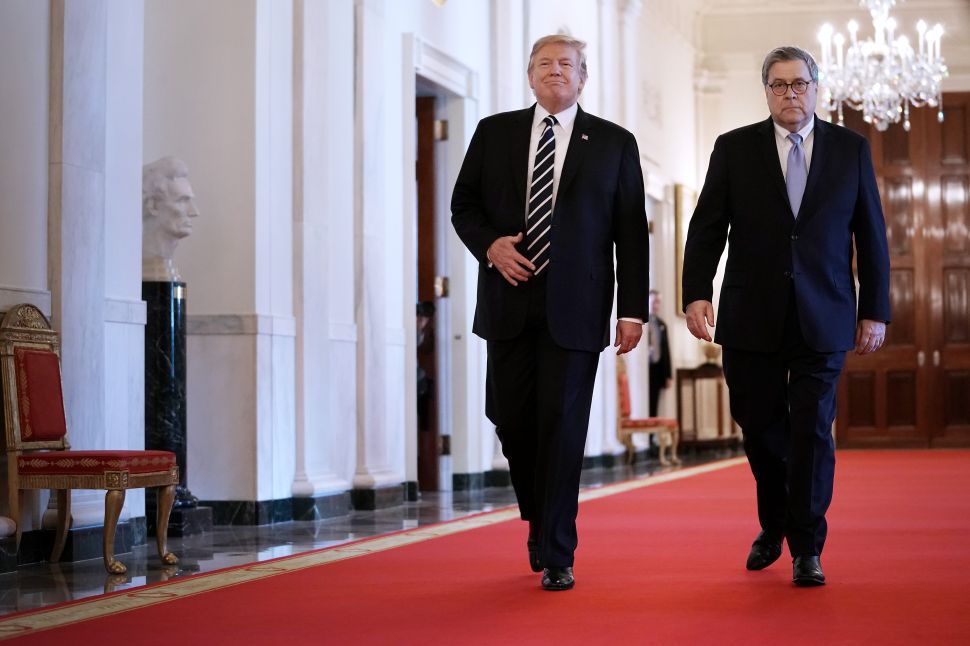