When Star Wars Episode IV – A New Hope flew into theaters in 1977, it was a revolutionary phenomenon that would soon alter the entertainment industry as it stood. Yet for all of the box office prowess, critical acclaim and paradigm-shifting power the series would go on to achieve, these movies couldn’t escape the stigma of nerdiness. Despite Luke Skywalker’s Force-wielding abilities, he couldn’t cast off the perception that anything related to science fiction or comic books was inherently uncool.

That negative viewpoint persisted for decades, as any Spider-Man-loving kid who has been stuffed into a school locker can attest to (proudly speaking from personal experience). But now look at us—at each other’s throats online because the magic dragon queen won her throne in a way we didn’t like.

Just as hydrogen atoms slowly evolved into something grander, so too have our perceptions of what’s cool morphed over time. Today, nerd culture is the mainstream, thanks to monolithic franchises such as Star Wars, Harry Potter, Marvel and Game of Thrones. And the far-reaching impact of these titles has transformed the industry’s approach to content, especially on the small screen.

The new book TV Geek: The Den of Geek Guide for the Netflix Generation is a love letter to that once-marginalized group put together by former Den of Geek founder Simon Brew and his team of U.K. and U.S. writers Ryan Lambie, Louisa Mellor, Alec Bojalad, Kayti Burt and Chris Longo. It explores the shifting landscape of a genre in dramatic flux. Driven by the passion of fandom, this tome dives headfirst into the inspirations behind beloved series, the growing financial burden of mass-produced TV, the proliferation of blockbusters and the rise of binge viewing. It feels like validation for hard-fought mainstream acceptance.

Observer sat down with the editor in chief of Den of Geek’s domestic division, Mike Cecchini, to discuss TV Geek and its major insights.

Observer: Tell me about its overall development and how it got off the ground on your end; I know that Simon Brew was initially the driving force.
Mike Cecchini: Some of these had started life as Den of Geek articles; to get them in shape for the book we went to more sources and we really tightened things up both from a word count perspective and to make sure they felt evergreen. We started putting this book together in January 2018, and we knew that it wasn’t going to be released for a while. So we had to make sure that even when we were talking about timely stuff, things like Game of Thrones or the Marvel Netflix shows, that it was still gonna be relevant to people in 2019 and 2020 because these books have a long lifespan. It was an eye opener.

Game of Thrones has helped to usher in blockbuster television and The Avengers really crystallized the new-age crossover spectacle. What do you think the lasting impact of these popular moves will be?
It’s like anything; it’s a double-edged sword. You see what Marvel just did with Endgame on the big screen. It’s great and wonderful and incredibly, impossibly successful. But how often can you replicate that? How often can you go to that well? How often can you do that without diluting it? We see now that the CW shows in 2019 are gonna have their biggest crossover event ever, and they had just done the biggest one ever in 2018 with “Elseworlds.” It’s even trickier to adapt than the Infinity Gauntlet comics line. I don’t know. I don’t think the world needs Better Call Saul meets Fear the Walking Dead.

Well, now that you’ve said it, I kind of want to see it.
It’s exciting to see. But I am always weary of it, because I enjoy this stuff and I enjoy living in this age of “nerd plenty” that we live in right now. But I do worry about going back to that world one too many times and diluting it. What happens when there is no market for it anymore? There are only so many great stories that can be told in this form and our chapter in the book really digs into how that came to be.

The book is centered on the “Netflix Generation.” The rise of that generation coincides with the middle class of cinema being squeezed out of existence. In your research for TV Geek, did you pick up on any trends that might be taking us into the next era of content?
Something’s gotta give. I do understand these arguments about “When IP [intellectual property] is king, where does that leave us?”

Could Spielberg have thrived in the way he did in the early ’80s if franchises were king the way they are now? I don’t know. Would we have had things like [Paul] Verhoeven’s RoboCop or [James] Cameron’s early Terminator movies or all these other things that are foundational for everything that we love right now? I don’t know. Are younger filmmakers—are smaller shows—crowded out? I don’t know.

AMC seems to be having a hell of a time finding a replacement for The Walking Dead. They have a lot of critically acclaimed stuff, but they don’t have a juggernaut like The Walking Dead was a few years ago. I think something has to happen. I don’t think it can all be superhero and Star Wars all the time. Eventually quality rises. And I think we’ll get there.

There’s an understandably strong focus on Netflix in the book. Do you think that could become outdated with the rise of competitive streaming services?
I think what we will see and have already seen with Netflix, as they step away from Marvel, [is that] they still know that IP is king for them. They are investing in different ways: they’re going hard after anime, betting heavily on that Cowboy Bebop live action adaptation, they signed that deal with Mark Millar. I think they will continue to find ways to address holes in the market.

People went crazy over The Haunting of Hill House. People went pretty crazy over Umbrella Academy. They’ll be fine. The question becomes: is there ever gonna be a point where Netflix feels either by necessity or by design that they need outside help? I get the feeling they’re preparing for this eventuality. What happens when they do not need somebody else’s library?

Overall, the book has a very positive tone. There are countless opportunities to lob a joke at a high-profile failure or a bone-headed move, but TV Geek never takes the bait.
That’s Den of Geek. That does go back to Simon Brew. Simon’s not with Den of Geek anymore, but that’s something that, even when I first came on as U.S. editor, I always appreciated about the site. And look, we give negative reviews. I’ve written brutal reviews about shows that I like and movies I would have much preferred to have enjoyed. When something needs it, it’s gonna get it. But there’s a line you walk. There’s a way to give a bad review without getting personal about it, to talk about failure without getting mean. No matter what, nobody sets out to make bad art. Sure, we can laugh at things a little bit, but snark? Who needs it? 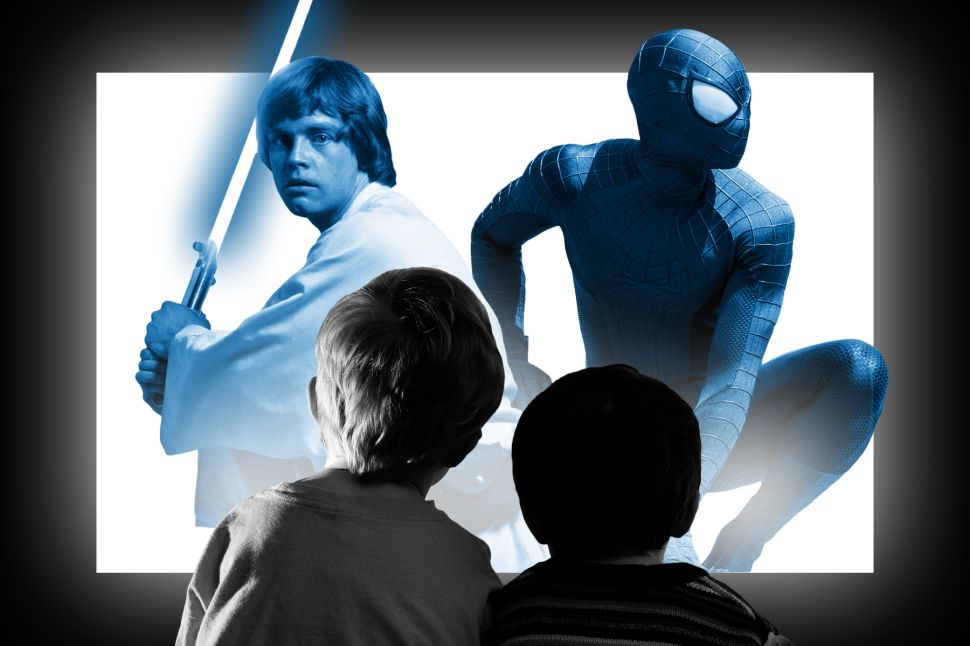