On a warm, vivid Sunday afternoon, DJ Fatin hauls her DJ equipment out of her car and into the chandeliered Widdi Catering Hall in Sunset Park, Brooklyn, for a female-only engagement party.

DJ Fatin, whose full name is Fatin Jarara, has been DJing New York City events for nearly 11 years. She’s pumped music through hundreds of events, primarily in Arab and Muslim communities, livening up engagement and henna/mehndi parties, weddings and other celebrations.

Amid Widdi’s gold and cream interior, Jarara arranges her mixer and laptop on a large a table, adjusts her cannonball-weight subwoofer and places gigantic speakers atop sturdy stands. Close by, the pastry caterer, known as “The Knafeh Queen” arranges one table of traditional Middle Eastern pastries and another of American-style sweets.

The soon-to-be bride’s female family members and friends trickle into the venue in intricate beaded gowns, heavily made-up eyes and high heels, some in hijab. As Jarara tests her sound levels playing a song by the Lebanese singer Ziad Bourji, a handful of women start to sway and lightly dance to the rhythmic music.

As New York City’s Arab and Muslim communities grow, so does the need for female DJs to play music at celebrations, often female-only. When Jarara started DJing nearly 11 years ago, there were only two other female DJs within the community, she estimates there are now 10.

Jarara immigrated to the U.S. with her family when she was 10 years old, landing in Bensonhurst, Brooklyn. She was born in Saudi Arabia to parents from the West Bank where her extended family still lives; she identifies as Palestinian.

Jarara recently explained how she started DJing within New York City’s Arab and Muslim circles and how being an immigrant of Palestinian heritage impacts her DJ business.

What prompted you to you start DJing?
My sister and I were enrolled in a program that exposed arts and media, from radio production to musical instruments, for young Arab girls. One session was about DJing, which my sister attended, and she DJed at a few community events afterwards.

One of my friends was getting married at that time and needed a woman DJ. My sister didn’t want to do it, she didn’t like that random people said “play better songs” while she had been DJing—which is normal, not everyone is going to like your style—so I agreed to do it.

Immediately, you started to get hired as a DJ?
All these other friends were getting married and asking me to DJ for them. It was my first year at Brooklyn College, as I got more settled, I thought, wow, this is gaining traction. People like my work, this could be a way for me to earn some money.

What appealed to you about DJing that made you want to continue?
Seeing people happy and enjoying themselves. My family doesn’t have a lot of extended family here, we’re not that rooted; whereas, some clients have large families and are part of communities. I get exposed to different music, traditions, how people celebrate love and success. DJing gives me a window into the different cultures within the Arab community, including outside the event. We might discuss the music over coffee, tea and sweets, in their home. And of course, I love the music.

Who are your clients?
I work mostly in the Muslim and Arab community.

Why would some of your clients specifically want a female DJ?
Since a majority of my clients are Muslim, some will be observing hijab, which is a religious observance, usually interpreted by wearing a headscarf and dressing modestly.

If it’s a female–only party with a woman DJ, the guests who observe hijab can be unveiled, wear party attire and dance however they want, without the male gaze, so to speak. Sometimes a bride doesn’t wear hijab but maybe her guests do and she just wants them to feel comfortable.

Some weddings are mixed, with female and male sections. I’m on the women’s side, but I’ll hook up speakers to both sides. However, it’s really the women that I’m serving and entertaining, they’re the ones being celebrated; if I’m entertaining the men, then it’s a bonus.

How did these events, all-female or mixed, handle the music before you and other female DJs started working?
They would sometimes hire men DJs and have them in a separate room—literally some of them would be DJing in the kitchen—and have speakers on the women’s side of the room. Some people still do that if they are not having a large wedding, but it’s nice to have options now.

I check on the men when I run a speaker into their section, sometimes they’ve turned it off because the music was too loud and no one was dancing. They do actually dance and participate if it’s a traditional song, like a Dabke.

What’s a Dabke?
It’s a line dance that comes from Palestine, Lebanon, Syria, Jordan and other countries. It’s a linear dance going in one direction; generally, people hold hands. I DJed a wedding yesterday that was Yemeni and they also love Dabke.

Do you choose the music for each event, do you play Western music?
Some clients ask for no western music, but I get a lot of requests for Cardi B—I have to play the clean versions because these are family events—and Beyoncé.

The other songs are never just the country of origin. It’s a mixture of different Arab countries and also maybe Turkish, Albanian and Indian Bollywood-style songs. There are beautiful song by famous artists like Oum Kalthoum, Fairuz, but for dancing, there are faster songs by Khaled, like “Didi,” songs by Nancy Ajram or Mohamed AlSalim; one of the most popular dance songs is “Shik Shak Shok.”

Is an artist like Rachid Taha, I can’t believe he died, too “rock” for an event?
Oh no, not too rock. Some of his songs are so widely known across the Arab world, if I play them, it’s a shared experience by everyone.

How do people find you to DJ their events?
It’s word of mouth. I like that because it means either someone has seen me perform at an event and wants to hire me, or has heard positive things about me, so they will be familiar with my taste, my style.

Do you feel like you’ve been a role model to this new crop of young female DJs working similar events?
We have supportive, professional relationships with each other; we refer each other all the time. A couple of them asked me questions when they first started—working with different ethnic backgrounds and how to be respectful of the music they prefer.

Oh, good question, how do you handle that?
I usually have something in mind if it’s a client from Palestine, from Egypt, from Yemen, etc., but it can be challenging because in some cases there are regional differences.

At a recent Yemeni event, I didn’t get a full playlist from the client, so I went off the Yemeni parties that I’ve done before. While they did appreciate a lot of the songs played, some people were saying, “You can skip over this song, no one knows how to dance to this song from our crowd.”

So even with my years of experience, these things come up, and they’re actually so refreshing—challenging but refreshing—because it reminds me I still have so much to learn. No group is a monolith, you can never assume.

You identify as Palestinian although you were born in Saudi Arabia, correct?
My parents were born in Palestine, the majority of my extended family still lives there; I prefer to be called Palestinian. I’m not ethnically Saudi, I just happened to be born there.

How did your family immigrate to the U.S.?
Family reunification through my uncle.

Did you grow up in an Arab community in Bensonhurst?
Not really, but it was very diverse.

How do you find new Arab songs, music from abroad?
Sometimes it’s from clients if they give me a playlist. It sounds kind of silly, but I also rely on YouTube suggestions. YouTube has both English and Arabic; the Arabic make it easier for me to search. Also, Arabic Party Starters on Spotify.

How does being an immigrant of Palestinian heritage impact your DJ business, I mean, besides being fluent in Arabic, having musical and cultural knowledge?
I like to play Palestinian Dabke because it’s really dynamic and people love it. There are more mainstream Palestinian artists now. I really love that part of my culture is being integrated into the events of people who are often not Palestinian. 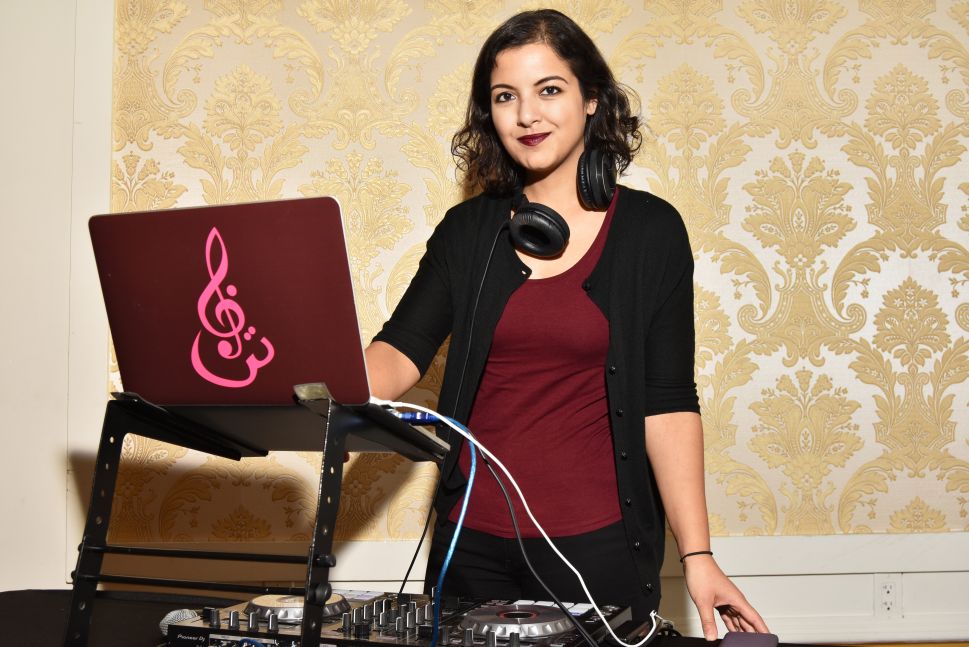