Donald Trump Jr.’s name was mentioned in the Mueller Report 150 times. That’s (probably) more times than the president has said “I love you” to his eldest offspring.

As our modern-day Watergate continues, President Donald Trump’s son testified in front of the Senate Intelligence Committee on Wednesday in a two-and-a-half hour closed-door session.

This was the second time the president’s son has testified before the committee. He was issued a subpoena to appear—after he refused to come in voluntarily for questioning—based on discrepancies between his previous testimony in 2017 and what was revealed in Special Counsel Robert Mueller’s findings.

Spoiler Alert: This was also the first subpoena issued to a member of the president’s family.

According to sources, Don Jr. told the committee that he did not tell his father about the June 2016 Trump Tower meeting. In regard to Trump Tower Moscow, he told the committee that he did not pay close attention to the project because it was one of many potential deals they had in the works—although the project was still on the table as late as November 2016.

Don Jr. also lashed out at Michael Cohen, Trump’s former personal lawyer, blaming any discrepancies in his testimony on Cohen, who he noted is “serving time right now for lying to these very investigative bodies.”

Yup, it’s easy to throw a criminal in your criminal inner-circle under the bus…

But what really treaded into completely batshit territory was how President Donald Trump reacted during an interview on Wednesday with George Stephanopoulos for ABC News.

While his son was being grilled about the Trump Tower meeting regarding Russian intel on the Clinton campaign (in an email regarding the prospect of receiving Clinton dirt from Russians, Don Jr. replied, “I Love it!”), President Trump was asked whether his campaign would accept such damaging information from foreigners, such as China or Russia, or hand it over to the FBI.

Trump replied with a serious Orwellian Animal Farm spin by changing the barometer of all we once thought of as constitutionally legal: “I think maybe you do both,” he said, adding: “I think you might want to listen, there isn’t anything wrong with listening. If somebody called from a country, Norway, ‘we have information on your opponent’—oh, I think I’d want to hear it.”

Ugh. There Trump goes again about Norway, home to his favorite type of non-shithole immigrants.

As to justify what might be revealed during Don Jr.’s testimony, Trump disputed the idea (on national TV) that a foreign government providing information on a political opponent is considered interference in our election process.

In the words of our president: “Somebody comes up and says, ‘hey, I have information on your opponent,’ do you call the FBI? I’ll tell you what, I’ve seen a lot of things over my life. I don’t think in my whole life I’ve ever called the FBI. In my whole life. You don’t call the FBI. You throw somebody out of your office, you do whatever you do.”

The president concluded by saying, “the FBI director was wrong,” regarding FBI Director Christopher Wray’s statement to lawmakers that “the FBI would want to know about” any foreign election meddling.

This is how low the bar of ethics has fallen in this ongoing constitutional crisis. And we sit and watch as Trump does it again, and again, and again—admitting to his crimes in public to normalize his corruption amongst his supporters.

And Don Jr., rest assured, despite the outcome, your presidential pardon will be waiting for you under the Christmas tree. 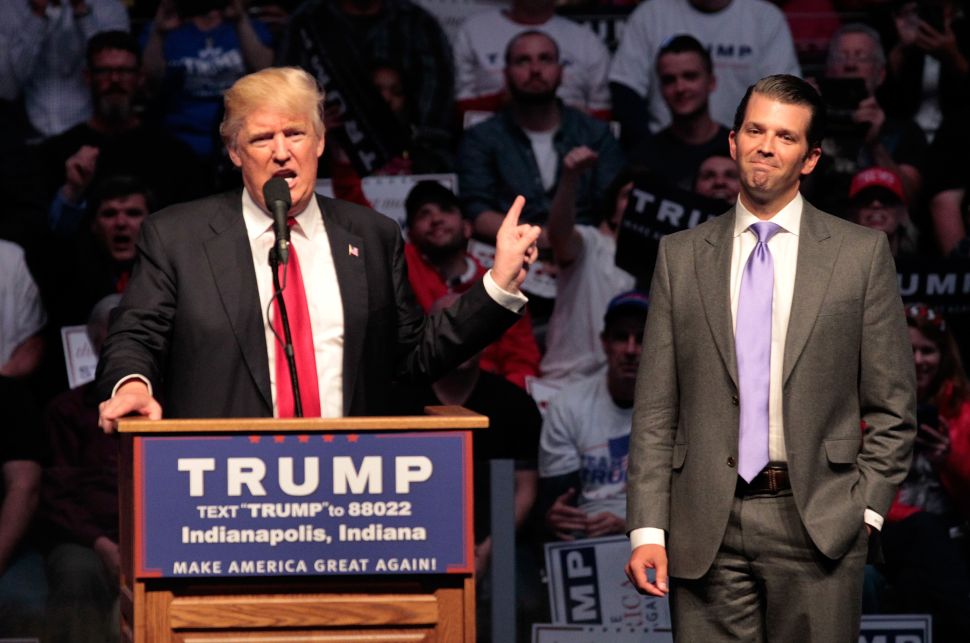