We can probably already expect an increase in UFO sightings in the skies above Massachusetts this summer, at least until residents get used to seeing their world turned upside down in the giant mirrored ball that is New Horizon drifting overhead. It is the latest peripatetic project by artist Doug Aitken, a boundary breaker in the best sense, a manipulator of media ranging from photography and film to sculpture, happenings, installations and environments. Regularly trying to disrupt how we see, feel and hear, the artist has a busy summer ahead of him. On the other side of the country, Aitken will be playing tricks of sound as well as light when he debuts Sonic Mountain (Sonoma) later this year, nestled in a eucalyptus grove at the Donum Estate in California’s Sonoma County. A wind chime built for a giant, it will make music from the bay breeze as the coastal light transforms its reflective surface.

“We have our practical lives, we have our known reality, we have the repetition of driving to work every day and eating the same thing for lunch all the time, and then we have something else, which is this other space. And in some way that space allows us, as humankind, to reach our potentials,” Aitken said, leaning back at his kitchen table in his Venice compound during a wide-ranging conversation with Observer. “We need a space like that. Without it we’re just repeating, we’re just moving through patterns of familiarity.”

The creation of New Horizon, which is essentially a very elaborate, mirrored hot air balloon, began when the venerable Trustees of Reservations in Massachusetts, the nation’s first environmental conservation nonprofit dating back 100 years, approached curator Pedro Alonzo to find unusual ways of activating some of the land to bring awareness to their ecological value. Choosing from 117 of the Trustees’ sites, the team narrowed the list to seven. Alonzo worked with Aitken to devise a kind of “road trip by air” to bring people to them all.

New Horizon’s journey will begin on July 12 at Long Point in Martha’s Vineyard. From there, it hops over to the Farm Institute, also on Martha’s Vineyard, before continuing on a journey that spans the state and includes an evening program at each stop, consisting of live talks, music and a light show with the mirrored balloon forming the backdrop. Guest speakers include architect Norman Foster and artist Sarah Morris at places like the deCordova Sculpture Park in Lincoln and the historic 17th century Crane Estate on Castle Hill in the Berkshires.

Each night, when the talk is over, acts like Destroyer, Kelsey Lu, songwriter Julie Byrne and poet Aja Monet take the stage as the sun begins to set. The balloon, meanwhile, puts on a show, its colors triggered by the sounds around it.

Aitken describes the project as a “twenty-first century road trip.” One that he made while probing the question of whether he could find “a way of looking at the landscape and interacting with people that is both incredibly observational and also engenders ideas and conversations.” In other words, an activity that is somehow both active and passive at the same time. And though certain stops are set, there will be surprise touchdowns, and even conceptually Aitken is open to seeing where the wind takes him, so to speak. “So, we could invite an incredible electronic musician or minimalist and say OK, Sunday, we’ll take off at sunrise and you just improvise and create something, or a conversation and use it as a turbine for ideas and creativity that’s future-forward. I’m very interested in art that kind of ruptures your reality, that makes you break from the repetition of everyday and see things differently.”

This isn’t the first time Aitken has made work that could be described as transient. Station to Station, a project from 2013, consisted of a 4,000-mile train ride across the U.S. making stops with concerts by musicians like Beck and Giorgio Moroder, as well as artworks by Urs Fischer, Liz Glynn and Kenneth Anger. At night, illumination panels outside the train carved an enigmatic streak of light cutting across the open landscape.

“Metaphorically, I really like the idea that the viewer completes the artwork. The viewer authors the artwork. And what you create as an artwork, it’s really kind of a door. And it’s up to the viewer to step inside that and to articulate what they see in that space,” said Aitken, describing what he hopes occurs with many of his works. That includes Don’t Forget to Breathe, an installation featuring three pulsing glass sculptures set in a Hollywood storefront that roused commuters from their daily grind while it was on view this February.

Meanwhile his “Mirage” series has attracted attention wherever it has landed. Made up of life-sized mirrored houses, they were first situated near Palm Springs in 2017 for the inaugural Desert X, before popping up in various forms in a Detroit warehouse and, last February, in the snowy Alps of Gstaad, Switzerland. Interacting with their environment, the forms act as a method of distracting viewers from the expected, and then drawing attention back to that which surrounds them.

Sonic Mountain (Sonoma) will do the same to strollers at Donum Estate in Sonoma County, California, where Aitken’s work will join existing sculptural commissions by artist like Ai Weiwei, Keith Haring, Yayoi Kusama and Louise Bourgeois. Addressing the site, he wanted to make something that would work with the wetlands and delta nearby, and the arresting breezes they stir as the afternoon wears on.

“I started thinking about this idea of, could we really make an artwork that’s living? Can we really make something that’s changing continuously,” he recalled. With a steel frame measuring 45 feet long, Sonic Mountain consists of 365 mirrored metal chimes in three concentric circles. “At times there are these sounds that are like frequencies. You can’t really make out where they’re coming from because they’re not really coming from one place. They’re coming from all around you. In a sense it creates this kind of sonic field.”

With New Horizon and Sonic Mountain (Sonoma) debuting so close together, it may seem like Aitken is about to have a moment. But Don’t Forget to Breathe was installed in February, the same time his half-dozen lightbox sculptures went on sale at Frieze L.A., both within days of installing the latest of his “Mirage” works in the freezing Alps. In other words, this is just his regular pace. 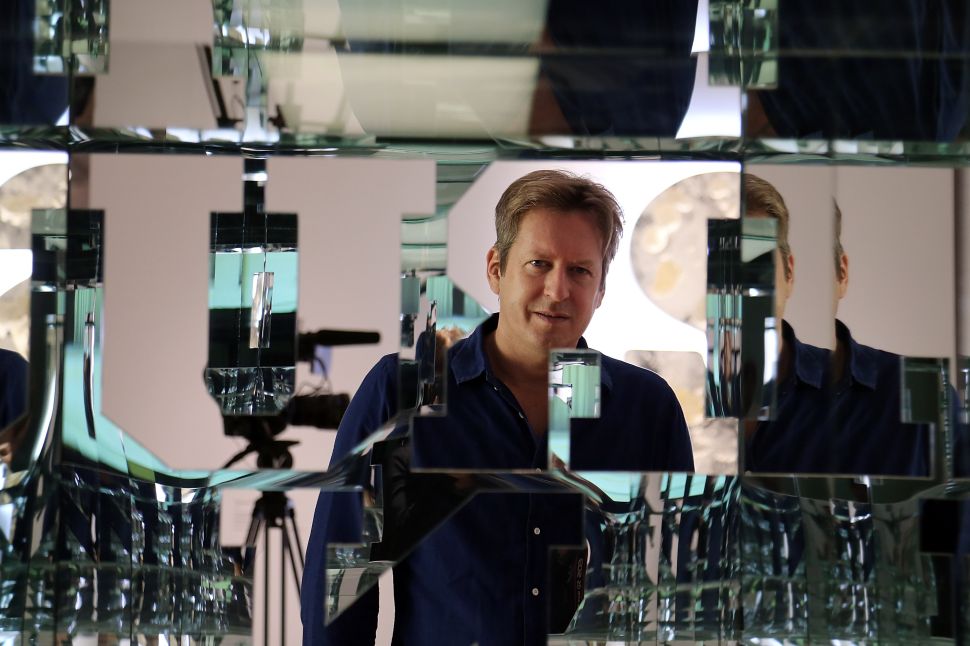