The first night of the 2020 Democratic debates was packed with healthcare proposals, Al Qaeda and Taliban mixups, and plenty of jabs, dings, slams and elbows. From Senator Elizabeth Warren’s first remarks attributing President Donald Trump’s soaring economy to “corruption pure and simple,” to Tulsi Gabbard’s closing warning against United States interventionalism, the first half of Democratic candidates jousted with precision (and sometimes in Spanish).

Here are our highlights.

SEE ALSO: Policy Weaknesses 2020 Dems Should Watch Out for During the Debates

In an apparent side-eye toward Elizabeth Warren’s calls for universal college and cancellation of student debt, which many critics, including The Washington Post‘s editorial board have said will benefit higher-income families, Klobuchar said she herself does “get concerned about paying for college for rich kids.”

Later in the debate, after Washington Governor Jay Inslee claimed to be “the only candidate here who has passed a law protecting a woman’s right of reproductive health, and health insurance,” Klobuchar praised the contributions of women candidates like herself, Warren and Tusli Gabbard.

“I just want to say there’s three women up here that have fought pretty hard for a woman’s right to choose,” said the Minnesota senator to applause from the audience.

Warren has spent much the campaign tiptoeing around the extent she supports the type of Medicare for All proposal sponsored by Bernie Sanders. But on Wednesday night, she offered her full-fledged support of the initiative, calling for the end to all private insurance plans.

“Look at the business model of an insurance company,” said Warren. “It leaves family with rising premiums, rising co-pays, fighting with insurance companies to get the health care they need. That’s why we need Medicare for All.”

In one of the night’s first moments of friction, New York City Mayor Bill de Blasio interrupted Beto O’Rourke as the former Texas congressman explained his support for keeping private insurance as a healthcare option.

“I think the choice is fundamental…” said O’Rourke, before De Blasio opted into the conversation.

“Private insurance is not working for tens of millions of Americans when you talk about the co-pays… the premiums, the out of pocket expenses, it’s not working,” said the mayor.

As both men talked over each other, John Delaney swooped in to offer his own perspective.

“I think we should be the party that keeps what’s working and fixes what’s broken,” said the former Maryland representative.

De Blasio opened up about his family twice during the debate. He claimed that what separated him from the other candidates onstage was having an African American son who he had to teach about the dangers of police brutality—apparently failing to take into account that Cory Booker was standing just several podiums away.

He also reflected on the death of his father, a World War II veteran who killed himself after struggling with cancer.

Although Democrats have spent much of the Trump presidency investigating the question of Russian collusion, the controversy took a backseat to policy issues on Wednesday night. However, it did crop up during one question on whether candidates would prosecute Trump should they triumph in 2020.

“This is not the No. 1 issue the American people ask us about,” lamented Delaney, after saying that no president should be above the law. “These kitchen table, pocketbook issues are actually what most Americans care about. They never ask about the Mueller report.”

After Tim Ryan falsely claimed the Taliban “started flying planes into our buildings,” Gabbard reminded the Ohio representative that the September 11th terrorist attacks were carried out by Al Qaeda.

“Al Qaeda attacked us on 9/11. That’s why and I so many other people joined the military: to go after Al Qaeda, not the Taliban,” said the Hawaii representative.

NBC had to cut to a commercial break due to audio problems, prompting Trump to call the news network “truly unprofessional.”

.@NBCNews and @MSNBC should be ashamed of themselves for having such a horrible technical breakdown in the middle of the debate. Truly unprofessional and only worthy of a FAKE NEWS Organization, which they are! 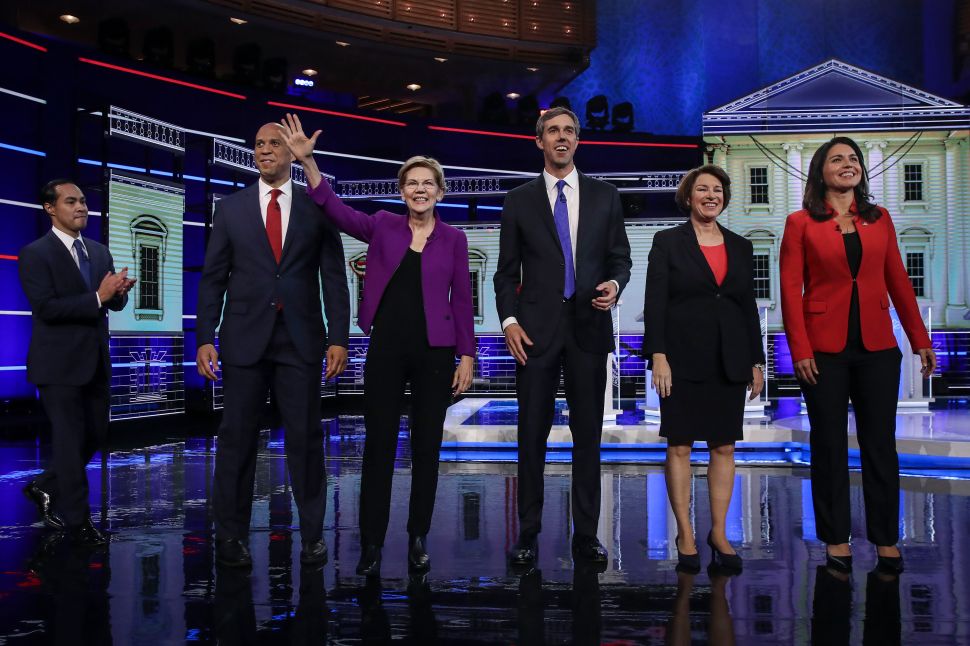