Corrupt governments degrade every sector of the market. But the effect of their negative impact, depending on the industry, can be hard to see. While cruel immigration policies and collapsing climate change agendas produce measurable impact and spectacle sure to be documented, failing government infrastructure that leads to a poor Venice Biennale pavilion is simply ignored. Art abstracts the human cost of instability.

That price weighs heavy on artists working under systems of oppression. Egypt’s pavilion for the 2019 Venice Biennial theme “May You Live in Interesting Times,” which was created by Islam Abdullah, Ahmed Chiha and Ahmed Abdel Karim and curated by Chiha, offers a vivid example. What little coverage from Western art press exists comes in the form of ridicule. Titled “Khnum Across Times Witness,” the pavilion landed a spot on The Art Newspaper’s “Worst of” list, followed by a now-removed reblog of the commentary in Ahram Online, an English newspaper run by Egypt’s largest news organization, The Daily Al-Ahram.

The installation includes a Pharaonic Tomb with two chambers. In one, several sphinxes have had their heads replaced with motorized monitors showing oppositional images—those of people doing good in the world, and those of people causing suffering and grief. In another, a giant sphinx with a satellite dish for a head demands viewers make a choice: death and destruction or peace and happiness. “The pavilion looks chintzy in a Vegas way—like a foam stage set” Hyperallergic art critic and Middle East art expert Hrag Vartanian told Observer, alluding to the pyramid-shaped Luxor Hotel in Los Vegas.

These feelings extend to some Egyptian artists who consider the pavilion an embarrassment. For example, Moataz Nasr, an artist based in Cairo and the 2017 pavilion representative, complained over Facebook that the Egyptian government has a clear influence over messaging on international stages. This year’s message of peace, he says, is a slap in the face for those living in Egypt who have seen otherwise. New reports back up this claim—late last month images of Egyptian authorities beating a student with a baseball bat circulated widely. The protestor was one of many student groups demanding the suspension of exams until the massive technology failures preventing accurate testing were addressed.

For his part, artist Islam Abdullah denied his installation carries a message meant to describe Egypt as a peaceful country, but the context of the pavilion gives it that read regardless. So too does the pavilion’s exhibition history, which consistently shows art drawing on themes like Egyptian history, good and evil and war and peace. The presentations from 2015, 2013, 2009 and 2007 all fit within these bounds, and those are just the ones easily accessed online.

As evidence of this, Nasr told me that on the day of his own pavilion opening two years ago, he arrived at the venue, only to find people installing three long panels with images of Tutankhamun and written messages like “Egypt is a peaceful country” without his approval. His own video, The Mountain, had nothing to do with this messaging, seeking instead to evoke a sense of quiet fearfulness amidst a small Egyptian village. Although Nasr ultimately succeeded in having the panels removed, no newspaper in Egypt wrote about the show and the pavilion was mysteriously closed the day after he left due to a broken wall in the installation. (Nasr fixed the wall when he learned of the problem from a friend, with the help of Galleria Continua.)

Shady El Noshokaty, who curated the widely acclaimed 2011 pavilion of the late new media artist Ahmed Basiony, complained that the artist’s death was exploited as promotion for the revolution at the expense of his legacy as an artist. Hours before the show’s opening, Ashraf Reda, the chairman of the Fine Arts Sector for the Ministry of Culture, removed Basiony’s name from the pavilion and delivered a new catalog in which he replaced the artist’s name and catalog essay by El Noshokaty. At the end of the new text, Reda placed a picture of himself.

Except for Abdullah, every art professional I spoke to inside and outside of Egypt complained of government interference and inefficiencies that hamstrung the work—even those who worked for the government. While Dr. Reda Abd El Salam, a member of previous Ministry of Culture selection committees, expressed support for the mixing of tourism and art (“We can’t say no to an artist’s vision”) he criticized the government for its management of the pavilions and slow decision-making process. “The actual letter comes only three months before the Biennale,” he explained. “That’s only three months to prepare.” Abdullah, Chiha and Karim might be the only artists for whom the shortened work period did not adversely affect their work—Abdullah told me he’s been working on the idea since 2004 and applied three times with the project before winning the position. If the work failed, it failed for other reasons.

But the largest issue artists’ face may stem from the lack of support Egypt provides. Abdullah says his project received $50,000 from the government and Nasr said he received $20,000 (neither artist could confirm the exact numbers). Both needed to self-fund and are not only prohibited from raising money with business partners, but must gift the work back to Egypt’s Ministry of Culture to repay the debt. As a point of comparison, the United States government offers $250,000, four times more than Abdullah, Chiha and Karim received, and advises artists to raise additional funding with the help of their galleries. The work is theirs to sell if they choose. “[Money’s] the main problem really,” Abd El Salam said, “and it needs to change as soon as possible.”

A myriad of invisible problems all leading back to Egypt’s infrastructure impact the country’s ability to launch strong pavilions. For example, their University art programs commonly teach students art history through the 1960s and ‘70s, ending there. Curators turn over quickly, cronyism plagues government appointed positions and the pavilion selection process, and arts professionals typically do not hold their positions long enough to learn the landscape. Reflecting the stability of the current regime, over the past eight years, Egypt’s minister of culture has changed ten times. “Of course the result is scandal,” Nasr plainly concluded.

Yet it’s also the status quo. “What happened this year is maybe normal,” El Noshokaty proposed. “This is how the government thinks about art—it is at the service of promoting Egypt, which is why the pavilion looks like a tourist park. It’s not art, it’s just how they see Egypt and Egyptian culture.” Some feel this use of the pavilion is a positive one. Abd El Salam advocated for a message of peace as a means of ridding the country’s reputation for civil unrest—one he feels is undeserved. He claimed that the work presented by Abdullah, Chiha and Karim “isn’t so weak so as to deserve all this criticism,” and described it as stronger than the previous two iterations, despite being on the 2017 selection committee.

But no art world curators and critics I spoke with who visited the pavilion shared Abd El Salam’s opinion. Vartanian, for example, messaged back “OMG” at the mere mention of the pavilion, sending me picture after picture of the work. He told me he loved documenting heavily questionable acts of artistic propaganda, noting the pavilion’s entrance, which he described as “typical autocrat’s aesthetic.” A curator who preferred not to be named due to his professional connections in Egypt thought so little of the pavilion, he saw no point in its discussion beyond ridicule. His words echoed the concerns of most, who said that it’s so far apart from what the community considers art, that it cannot even be evaluated by those standards. (Abdullah felt differently, citing visitors who shed tears walking through the exhibition.)

The response of these professionals demonstrates the ineffectiveness of the government’s strategy to merge art and tourism, preventing Egypt from presenting a pavilion that could be considered for the Biennale’s Golden Lion Award. “Does Egypt even want to win the award?” I asked Abd El Salam. “Of course,” he replied, though he later conceded that he would have chosen a different concept.

“There is no solution to these problems,” El Noshokaty said matter-of-factly. “We are just a few—no more than 20 or 30 artists—not living in a bubble. But if the majority of artists under authoritarian rule, roughly two million, believe that this is how art should function, who will win? Whose views will be represented? The majority.”

El Noshokaty’s pragmatism did not preclude discussing the large successes of the handful of Egyptian artists operating in the larger art world. Probably the most recent example, Hassan Khan, won the coveted Silver Lion for the most promising young artist at the 2017 Venice Biennale, but El Noshokaty himself, Nasr, Wael Shawky, Mona Marzouk and Lara Baladi are just a few Egyptian artists who stand out among their peers. “We create a place in this world because we share creative concepts and ideas. Not because we have slogans. This is completely against the will of authoritarian power,” El Noshokaty explained.

As he sees it, artists working within a system too broken to alter must rely on common strategies. “If we want to change, then we have to work individually,” he said. “There’s not any area to communicate anymore. Me, Moataz Nasr, Hassan Khan—everyone is working to enlarge the scale of our position. We work individually, everyone working in individual circles, hoping that no one stops us.”

Even those actions, though, come with risk. With the rise of corruption and government-led violence, artists who speak out may imperil their freedom and well-being. When I asked El Noshokaty whether he could be jailed or beaten for his comments, he seemed unsure. “Possibly,” he said, his words dropping like lead. 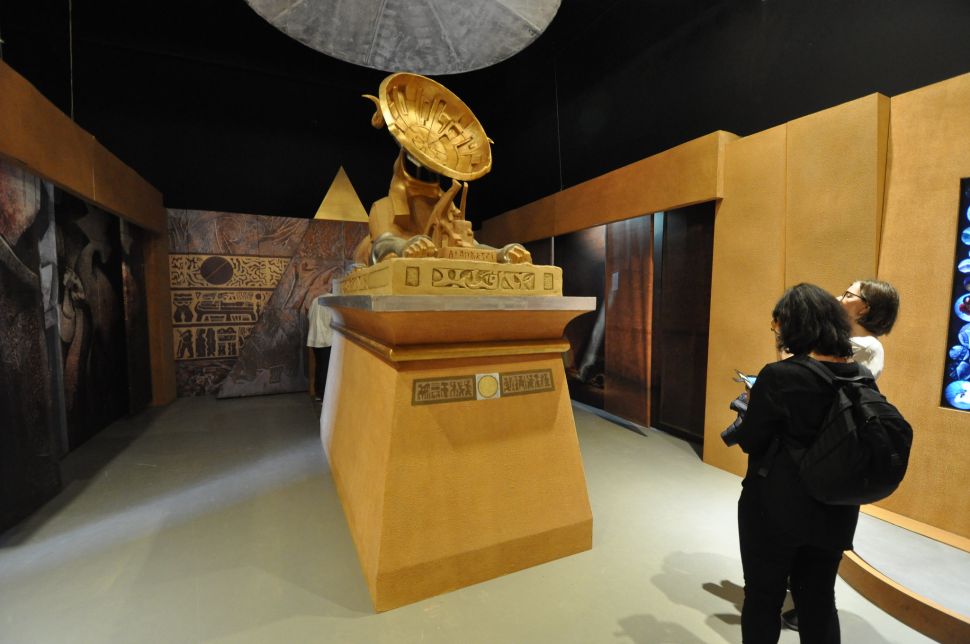