Elvia Wilk’s brutal new satire Oval is a lot of things—including a condemnation of gentrification under the guise of environmentalism, and a critique of how well-meaning people try and fail to change humanity for the better. But at its heart, the novel feels like a prolonged elegy for the art world, a coming-of-age story in which maturity is defined by the ability to leave a tired scene behind. Wilk is an arts journalist, with bylines in Frieze and other publications, and it shows. Her tone feels familiar to me, having done that same job for roughly a decade, both as a writer and an editor: a desperate lament of someone stuck inside a system they occasionally despise, and yet require for their very survival.

Satires of the art world—including, most recently, the terrible Netflix horror film Velvet Buzzsaw—tend to dwell on the milieu’s obsession with filthy lucre. It’s all fancy rooms full of moneyed idiots barking pompous nonsense at each other in order to gussy up what they’re really doing: exchanging marketable commodities, pursuing investment opportunities. One knee-jerk reaction is to scoff at this Hollywood cliché—I certainly have in the past—to find it too easy, too simplistic, too cynical. But even mainstream critics seem to agree with it, more or less. “An omnivorous, sleepless market is the defining feature of the 21st-century art landscape,” Holland Cotter wrote recently in the New York Times. “Money is the universal solvent….Aesthetic value measured in dollars has, of course, always been part of the talk about art. Now it’s pretty much the whole conversation…”

The elephant in the room of any studio visit with an artist is the fact that the work they’ve made—obsessed over, lived with, sweated for—will likely end up in the home (or, more likely, the storage unit) of someone whom the artist might be politically, socially and morally opposed to. Along the way, of course, the painting or sculpture will be shown in public, where the masses can puzzle over it, dream about it, Instagram it. But any amount of introspection done by an artist, or an arts journalist, is likely to lead to the same morbid impasse: We’re all small cogs in a machine that’s built to print money. At least the artist gets to keep a fair chunk of that cash; the journalist, on the other hand, is left to nibble on the crumbs of whatever that year’s word rate happens to be.

I don’t know Elvia Wilk, and I’m not trying to project all of my own anxieties and hang-ups on her simply because we both float in the same professional pool. But Oval reads like a novel by someone who has encountered similar dark-nights-of-the-soul, and then followed this status quo to its logical, nightmarish conclusion. The book is set in Berlin, perhaps ten years in the future. Our protagonists are a young couple, Anja (a scientist with a trust fund) and Louis (a former artist turned NGO consultant) who are living in a corporate-sponsored eco-friendly housing complex. In some ways, theirs is a familiar version of the German capital, with oddly dressed hipsters wasting druggy nights away at a club called the Baron, and endless summers spent carousing canal-side; the days pulse with a lazy, sated hedonism. And the city, of course, is lousy with artists.

But in Wilk’s dystopian Berlin, the creative class has happily sold its integrity for a decent living. Any sane MFA grad doesn’t toil in the studio, hoping for a break-out solo show at a quasi-legal DIY space; they become consultants, attached to one of a handful of mega-corporations with names like Basquiatt and Finster. This isn’t so far off from our present reality, where Facebook maintains an “artist-in-residence” program to jazz up its corporate campuses, and is now branching out into more public initiatives. Some of the verbiage surrounding that project could have been borrowed directly from Oval’s future-worshipping management class (“As a community of builders and a catalyst for connection, Facebook has much to contribute to the global dialogue about the vital role art of art in advancing ideas and innovation…”). But in Wilk’s Berlin, selling out isn’t something that an artist does, grudgingly, to supplement her “serious” practice; selling out is the whole point.

Rather than relying on outdated models—solo exhibitions, sales of discrete paintings or videos—Oval’s creatives offer up their existence to a wealthy patron, so that “a person’s whole life was part of someone else’s investment portfolio.” (A nice, grotesque touch: In certain cases, if the artist dies before their contract is up, her head is shrunken and exhibited as sculpture.) “Most of the artists Anja had met had made their real money working for companies,” Wilk writes, “even way back before most of the commercial galleries had transitioned into venues for product launches and release parties and initial coin offerings….The investor providing the artist’s tenure was logically the owner of anything made during the time period. Having a tenure was infinitely more stable for most artists than object-by-object sale had ever been.”

Presented as a win-win for everyone involved, this dynamic serves mainly to drain the art world of any political impact it may have once had. Hold-outs from the old days still exist, of course, but they’re mocked as relics and dinosaurs who have yet to get with the program. One of the most crushing moments of Oval involves a retrograde performance from “two feminist artists in their seventies who were legendary if you were into that sort of thing. One of them was wearing a sailor outfit…She said ‘patri-capitalism’ and ‘fuck me, daddy.’ In case you hadn’t gotten the message, she said, ‘We are the only transgressors left.’”

This sort of “outdated” nostalgia is contrasted with the corporatized space of cutting-edge contemporary art, where the real magic happens. In Oval, performance is the prevalent medium of the day; since the artist’s goal is merely to irreverently sell the idea of a company’s brand, there’s no pressure to make physical, saleable paintings or sculptures. In a nod to Helen Dewitt’s Lightning Rods, one artist-consultant’s “main material in her work was her own body. Her consulting strategy since she was very young had been to urge office productivity by exposing her naked self to the gaze of office workers whenever productivity waned.” But the undisputed star of the creative-corporate scene is Snow White, whose highly respected multimedia performances are merely a vehicle to hawk skin-lightening cream and other products. Anja, and everyone else, is complicit in recasting this as a bold new form of institutional critique—one in which “both sides get to feel superior” and “each side thinks the other one is the chump.” (SEE ALSO: Forensic Architecture’s piece in the current Whitney Biennial, which uses that platform to call out Whitney board vice chairman Warren B. Kanders and his tear-gas fortune.)

So far, so depressing. And yet there’s something about Oval that feels generative rather than merely hopeless. As satire, the novel actually works. Too many depictions of the art world are flat cartoons, imagined by outsiders, and their message is blunt: Everyone’s an idiot; my kid could do that; buy low, sell high, drink Campari; can you believe this shit? They mock the worst of the scene while shruggingly admitting that things are unlikely to change. Oval, however, is less of a finger poking fun at pretension, and more of a metaphorical gun held to the head. What sort of future do we actually want, if not deserve?

Reading the novel, I was reminded of the final editor’s letter penned by Dan Fox of Frieze, as he was stepping down from his role at the magazine. He notes that “an increasingly frequent topic of conversation I’ve encountered over the last few years has been that of leaving the art world entirely. Friends tell me that they want to write novels instead of curate shows, create gardens instead of installations or involve themselves in organizations trying to make a political difference rather than make art.” Fox’s peers, a group that Wilk certainly numbers among, are haunted by “a feeling that the weirdos, eccentrics and single-minded folk who felt at home in this field are now outnumbered by managers and marketers.” In some ways, what Oval has done is take this crisis of confidence and spin it out into a self-contained dystopia.

Which is not to say that the novel is solely focused on the art world, per se—Wilk’s real skill is in sketching an entire society that has thrown up its hands in the face of corporate dominance. The novel’s climax, which oddly mirrors the final moments of Fight Club, finds Anja high atop the artificial hill upon which her eco-house is built. Berlin is burning, everywhere, and she surveys the wreckage with something like glee: “There had never been such a good time to buy.” We’re left unsure of her intentions—will she be part of the problem, or part of the solution, and is there even a difference?

Oval is a sharp weapon, both a provocation and a reckoning. For those on the outside of this thing called the art world, it might read as just another hyperbolic rendering of a scene that most people have already disregarded as vain and silly. But for anyone whose livelihood depends on engaging with the creative industry on a daily basis, it’s a call to arms—and a potent reminder that selling out doesn’t happen all at once, but rather in sneaky, slippery increments. What once seemed like a joke is now just reality. Before we realize it, we’re happily paying our $55 to visit the Facebook-Google-Altria Biennial, where Marina Abramović is debuting her latest rap-opera about the joys of Juul. 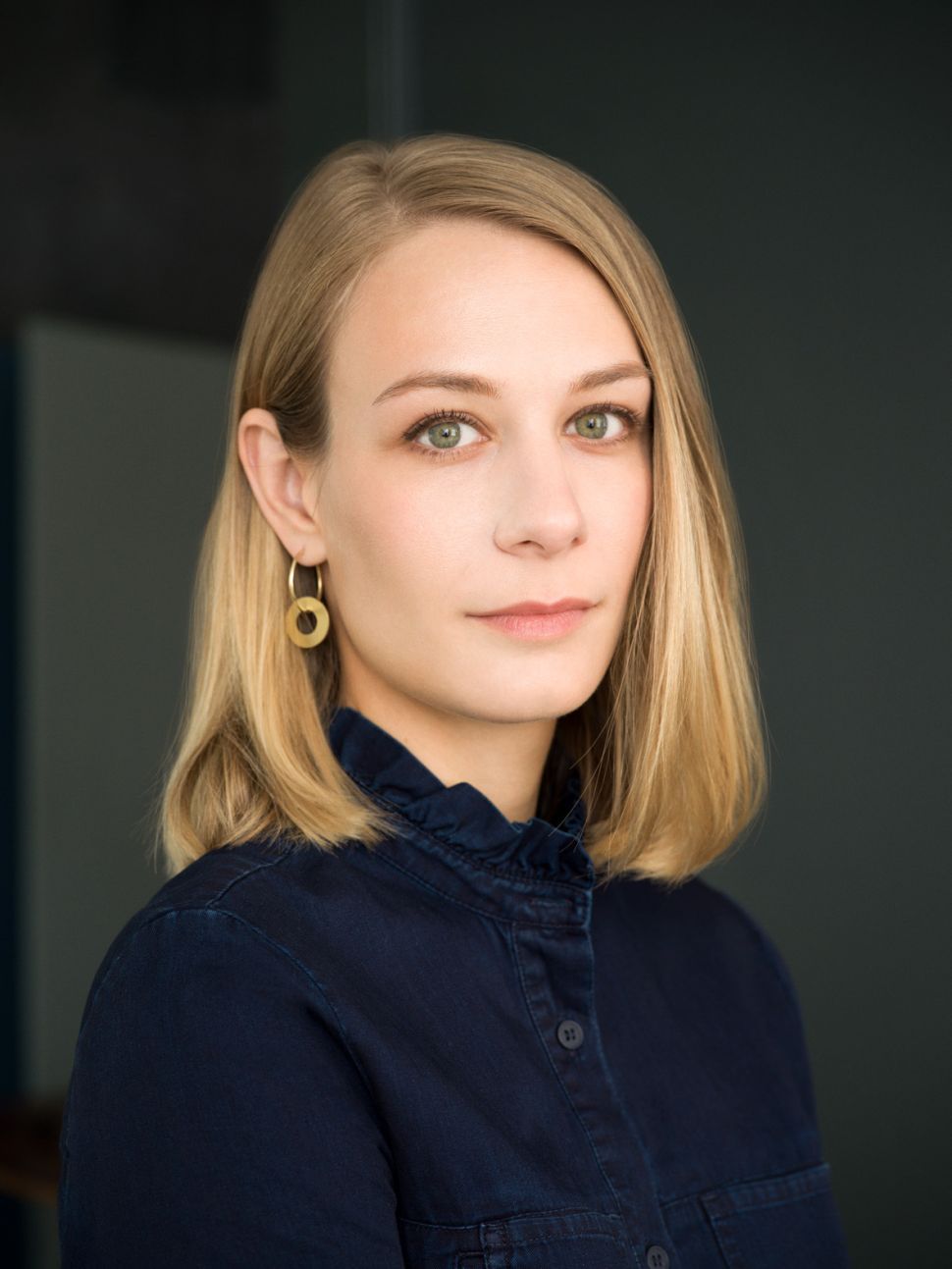