The late-night television landscape is and has always been dominated by men. Sure, Samantha Bee is on TBS, but Busy Philipps’ E! show was recently canceled and Joan Rivers series on Fox only ran for two years in the 1980s. With the field swamped by men, it’s only natural that suits are the uniform of late-night hosts, but what would it look like with a woman at the helm of The Tonight Show? The new movie Late Night (out Friday, June 7), starring Emma Thompson as Katherine Newbury, is here to give us an idea. Suits are still in, but what Thompson wears to own the room is far more exciting than what’s on offer from the current batch of hosts.

“There is no reference for the character. It is a work of fiction and that is very symbolic in 2019,” the movie’s costume designer, Mitchell Travers, explained to Observer. “What I did was look to women who have paved the way in comedy. I tried to give little nods to the style of Joan Rivers, Gilda Radner and Ellen [DeGeneres].” Another trailblazer he looked to (and suit-wearer) is ‘80s comedy icon, Paula Poundstone, while also drawing on Mindy Kaling’s experiences working in writers’ rooms. Kaling wrote Late Night, and she plays the character of Molly, the first woman to be hired as a writer on Katherine’s show. Molly shakes things up both professionally and personally for the TV host, whose popularity is waning. To show that arc, the team relied on clothing to provide visual cues tied to Katherine’s evolution. Below, Travers talks us through the changes that take place. 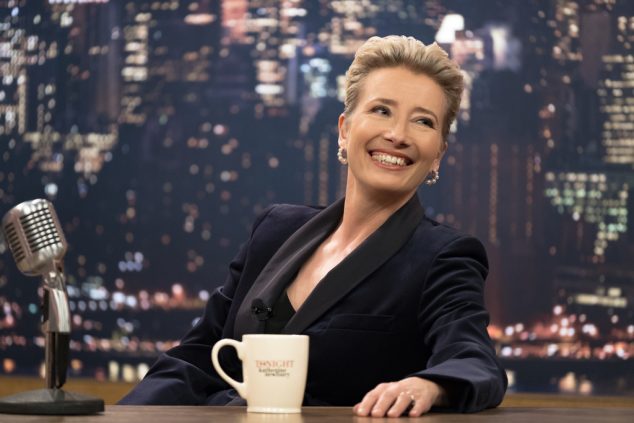 “I sent over a huge look book to Mindy and Nisha [Ganatra], basically saying ‘This how I see this woman, this is how I would imagine a woman who has risen from the ranks or grown up in a boys club.’ I feel like this would be her little FU you to them: ‘If I need to look like one of you in order to make it or to be taken seriously then I’m going to do it and look fabulous at the same time.’ At the beginning she’s in a routine and has not been inspired by anything, she’s not really connected to what makes her great. We wanted that tailoring to feel a little more expected, a little more traditional to the menswear rule book.” 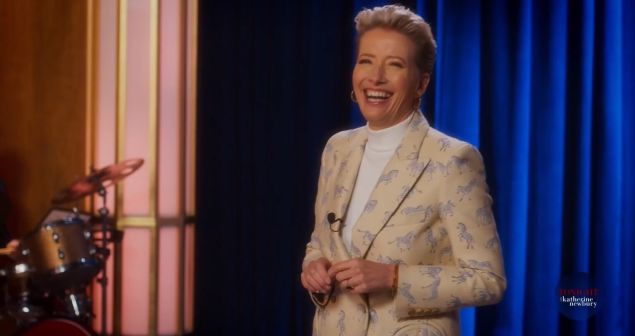 “As she allows herself to be open to new ideas, we wanted that to translate in the clothes. She starts to use little details to elevate the look. The zebra jacket is made by Blazé Milano. She’s realizing she can start to have fun with clothes. If you look really closely at the detail of the jewelry, she’s wearing zebra bracelets, zebra rings. We wanted to make it seem almost like she got carried away with the fun of the jacket and let it spill over into the detail, which then informed her later changes where she really finds her stride with the relationship between jewelry and tailoring. Emma looks 30 feet tall in this costume. I love her height and I love working with her because she has such an elegant way about her.”

Getting the Joan Rivers treatment 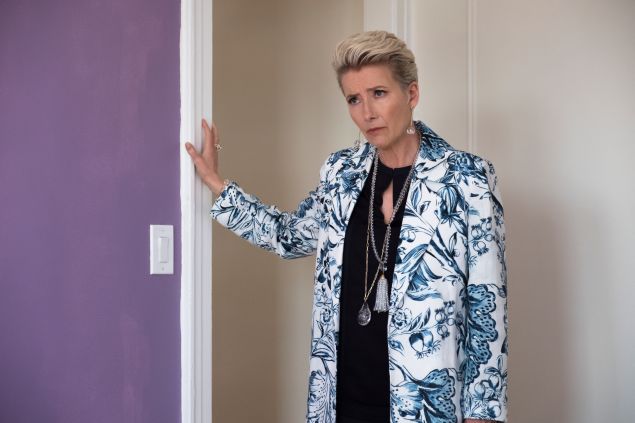 “The blue floral jacket is made by Maison Alma. They do these extraordinary hand-painted textiles, looking to old wallpaper and textiles of years gone by and reinventing them. I thought that mentality in terms of design really would speak to Katherine because she would respect the craft. She would respect the quality, but she would also be really drawn to something that was looking toward the past, reinventing itself in a way. That really spoke to where she was at in life, specifically that coat. We did the Joan Rivers treatment, I call it, where you keep everything dark and you do a statement jacket and jewelry on top of it.” 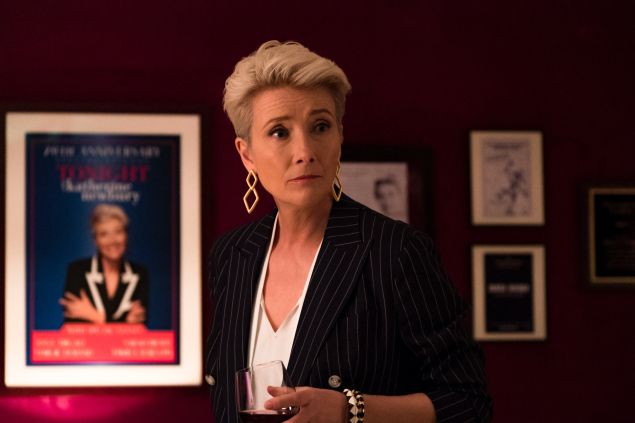 “All of the jewelry, to me, had to have some sort of a story about where it came from or how it came to be in this woman’s possession. I reached out to Doryn Wallach—she works with Art Deco shapes mostly—and she has this incredible sapphire ring. We used that as Katherine’s engagement ring to John Lithgow’s character Walter. We felt like it was as untraditional as this woman’s life has been. I felt like she would consider jewelry an investment. Not in a diamonds way but in a historical way. As time goes on she starts to embrace costume jewelry and realizes you can have a lot more fun with your accessories and it doesn’t all have to be Byzantine, it can be three dollars from Topshop. You can enjoy that just as much with the right outfit. The gold [earrings] are costume jewelry. I love the shape and I love that it felt like Art Deco jewelry but it was super affordable.”

Getting Down to Work 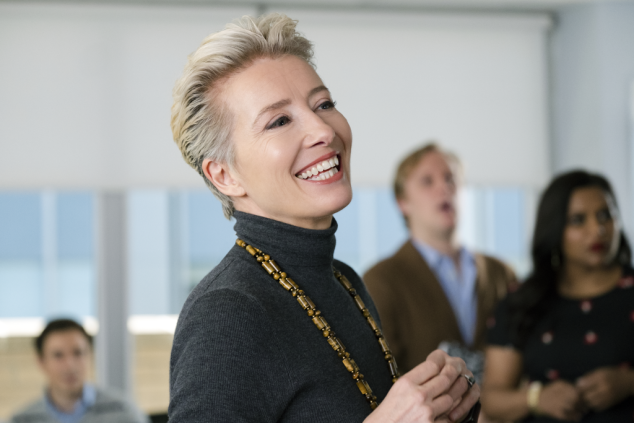 “We do a bit of an evolution; [at first] she mostly wears jackets like Max Mara or Armani, soft knits and things that are much more appropriate for daywear versus the evening look. In the way that you’re used to seeing a man roll up his sleeves, what does that look like for this character? For us, it felt like the jacket would come off and it would be a sleeveless turtleneck—you get the same feeling of rolling up your sleeves, but it’s done in a way that we haven’t seen before.” 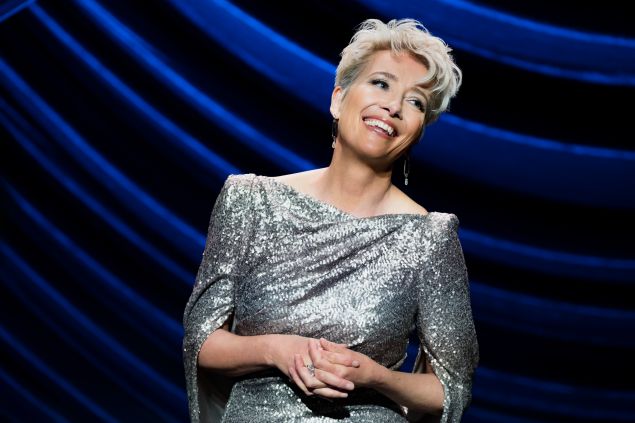 The Talbot Runhof gown is the only time we ever see a dress or a skirt [on Katherine] in the film. And we wanted a sense that she was presenting herself to the world in a way that she doesn’t traditionally. Emma loathes Spanx, so we leaned into that idea—for a woman to appear in public in a red carpet or formal setting, there’s just so much more work involved. There is an expectation of what women should look like for these extravagant nights and we don’t put the same pressure on men. It is almost like layering on armor for battle. The dress sort of spoke to that “knight in armor” look. It speaks to Katherine’s 1920s Art Deco sensibility. We really did want to make a statement about how differently women have to prepare for nights like that, as opposed to men. 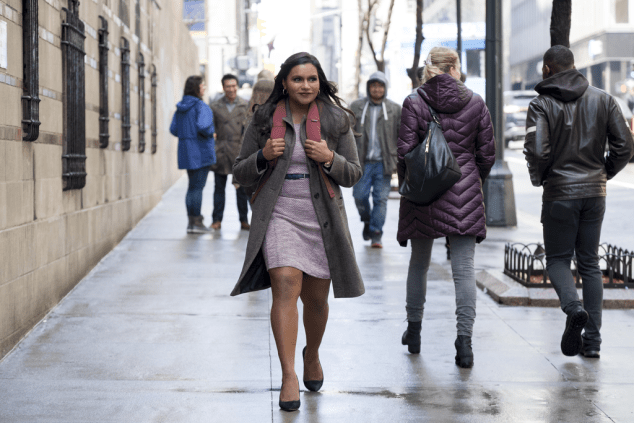 “That Theory dress was showing what it’s like to come into New York with just wide-eyed anticipation, being an outsider to New York. Audiences got to know and love Mindy’s character on The Mindy Project for the bold use of color. So for us, it was really interesting to try a different lane; reduce the amount of color, reduce the amount of texture and just create a lane that felt much more like Molly.

Mindy will send me links to things at four in the morning. She’s always thinking about it. She understands the power of clothing.” 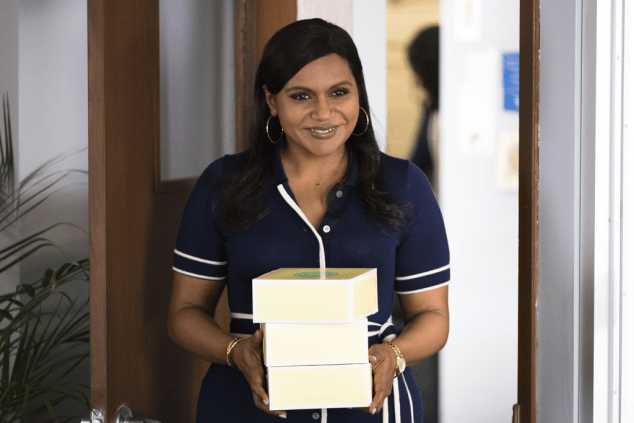 “It really does come from Mindy’s experience where she was not only the only person of color, but the only woman in rooms like this. Mindy and I would talk about what it looked like and what it felt like. I find the color navy to be boring, the uninspired uniform of the world. So we really leaned into that idea. How do you build a room where every man in there thinks he is significant and unique? It takes somebody with a different point of view to come in and show you just how similar they all are. There were micro differences between all of them. But ultimately they kind of come from the same place.”

Opening Up to Possibilities With a Pop of Color 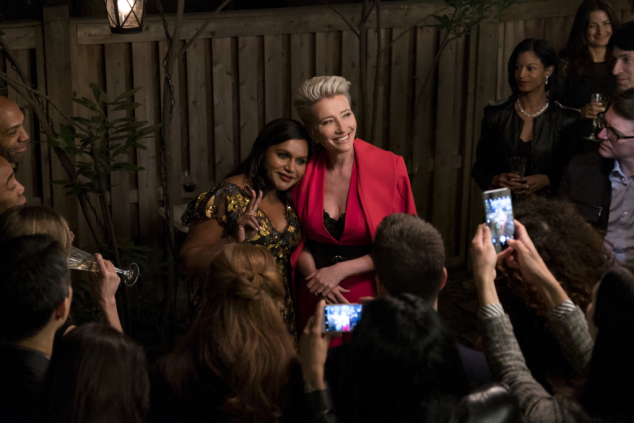 “Everything starts to change around her. So it was really important with this look to feel the moment where she opens herself to possibility. Katherine and Molly have this great moment together where Katherine realizes there might be something to Molly; there might be something to this woman’s point of view. We wanted to build the party with these smoky tones of old world New York and inject that with a flash of red, so you could find her in every room. The Brandon Maxwell jumpsuit really spoke to her vulnerability mixed with her tenacity—there’s a little cleavage. It’s a really striking shape on Emma. To watch her move in it, we pretty much knew instantly it was going to be that outfit. 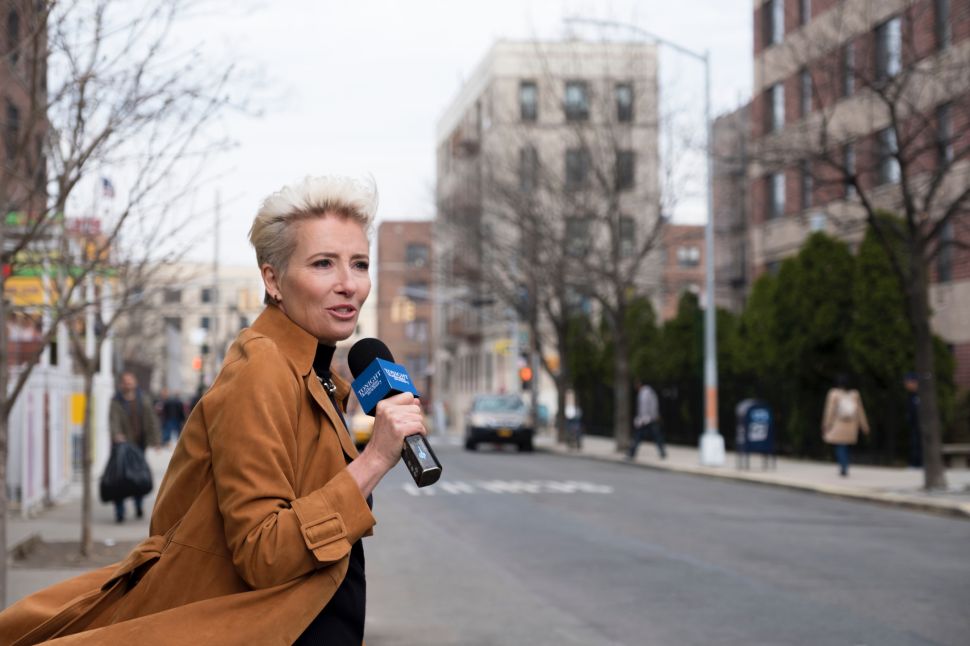