Even before getting to the actual content of Euphoria, the mere existence of the show is something of an anomaly. Produced by Drake, created by Sam Levinson (The Wizard Of Lies) and based on an Israeli series, Euphoria is HBO’s first attempt at a teen drama. It’s a somewhat surprising move for the network—and it’s paired up on Sundays with Big Little Lies—but Euphoria is a dark, hard-to-watch and often overwhelming drama with a lot of moving parts that only occasionally seem to work together. So in short: It’s definitely HBO.

Euphoria stars former-Disney star Zendaya as Rue, a biracial teenage drug addict who has just gotten out of rehab but has no intentions of staying clean. She OD-ed and was found by her younger sister, Gia (Storm Reid). Now her peers frequently express surprise when seeing Rue because they assumed she had died. Rue, as she explains in a voiceover that persists throughout, was born three days after 9/11, thrown into a “middle-class childhood in an American suburb,” and was diagnosed with a handful of mental disorders. She’s quick to say that she didn’t have a traumatic childhood; it’s just the way her brain is wired. It isn’t long before she’s abusing drugs and alcohol—after having tested out her dying father’s prescribed painkillers—endlessly searching for the next high. But she’s not, as the title suggests, simply searching for euphoria. She’s searching to numb, to dull, to quiet.

SEE ALSO: Can HBO Hold on to the Creators of ‘Game of Thrones’?

Rue is the through line and narrator, but Euphoria is very much an ensemble drama full of mostly-unknown but skilled actors. Each episode (critics were sent four of the eight episodes) begins with a short montage dedicated to one of the characters, highlighting the important parts of their youths that helped shaped them into the people they are today—for better or worse.

There’s oft-shirtless Nate Jacobs, a jock with an on-again/off-again girlfriend and a dark past that causes him to frequently lash out in the present. Kat Hernandez (Barbie Ferreira) has a painful, youthful breakup and begins writing smutty One Direction fan-fiction before aiming to spend junior year as “a woman of questionable morals.” Jules Vaughn (Hunter Schafer) is a trans girl with a history of self-harm and a love for spontaneous hook-ups via Grindr, often with the wrong person. The characters weave in and out of each other’s lives, similarly to how real high school relationships ebb and flow, in a way that feels natural.

Jules and Rue get the best parts of Euphoria, as the two quickly form an intense friendship (for Rue, it’s a crush) and become almost inseparable. Their bond is a nice light in this utterly gloomy world where everyone is either miserable or punctuating those moments of misery with coke and molly. There is both an ease and an interesting tension to their friendship, one where they’re simultaneously candid about trauma but hesitant to express smaller things.

Jules and Rue are portrayed brilliantly by the two actresses—Zendaya in particular showcases her natural talent in a raw performance, tasked with skating between Rue’s words of teenage antics and drugged-out exhaustion, between sly observer and active participator. It’s easy to go too big when a role involves addiction—especially young addiction—but Zendaya finds the balance.

When it comes to the overall world of Euphoria, however, the results are a little dicier. It’s a mixed bag of tricks: The series is certainly aesthetically pleasing and well-directed (Levinson directs five of the eight episodes), with smooth camera work that boosts the characters’ interior lives (the fourth episode is especially fun to watch). But the writing is shaky, filled with clunky lines and not-so-twisty plot twists.

Euphoria is committed to showing that the kids, decidedly, are not alright—like an extra-long, extra-horrifying PSA done in the style of a music video and delivered to already-paranoid parents. Its emphasis on this (very-real!) idea of fucked-up teenagers somehow manages to be simultaneously admirable and tiring, switching from scenes that dig into their youthful brand of nihilism (“The world’s coming to an end and I haven’t even graduated high school yet”) to scenes that are reminiscent of UK’s Skins—if Skins had zero self-awareness. (Luckily, there are some silly moments of levity, such as when Rue provides a lecture on proper dick pic etiquette.)

Euphoria may technically be a high school drama but it’s not exactly the humorously dramatic fare we’re used to from The CW. For parents, it’s sure to be something of a horror show: Euphoria traffics in depictions of sex (and I haven’t seen a series so dick-happy since American Vandal), drug trips, sexting (though it’s worth noting that these teens seem bizarrely well-educated on child pornography laws) and putting teens into alarming situations that make you want to close your eyes to avoid what’s sure to come next. Even when Euphoria is good—and often it is quite good—it’s not exactly enjoyable. Euphoria would do better to keep its focus narrow; Zendaya’s arc pops whenever it’s on screen but the more the scope is widened, the harder it is to keep caring.

Yet, there is certainly something engaging about Euphoria; maybe it’s akin to the idea of watching a car crash as you witness teenagers fall deeper and deeper into danger. But at the same time, Euphoria toes the risks of running this into the ground—at a certain point, once you’ve built a tolerance, its attempts to titillate and devastate are so overt and frequent that it almost becomes boring. Maybe it can be argued that that’s sort of the point, that for Teens These Days, this is all par for the course; everything that parents fear is nothing more than mundane. 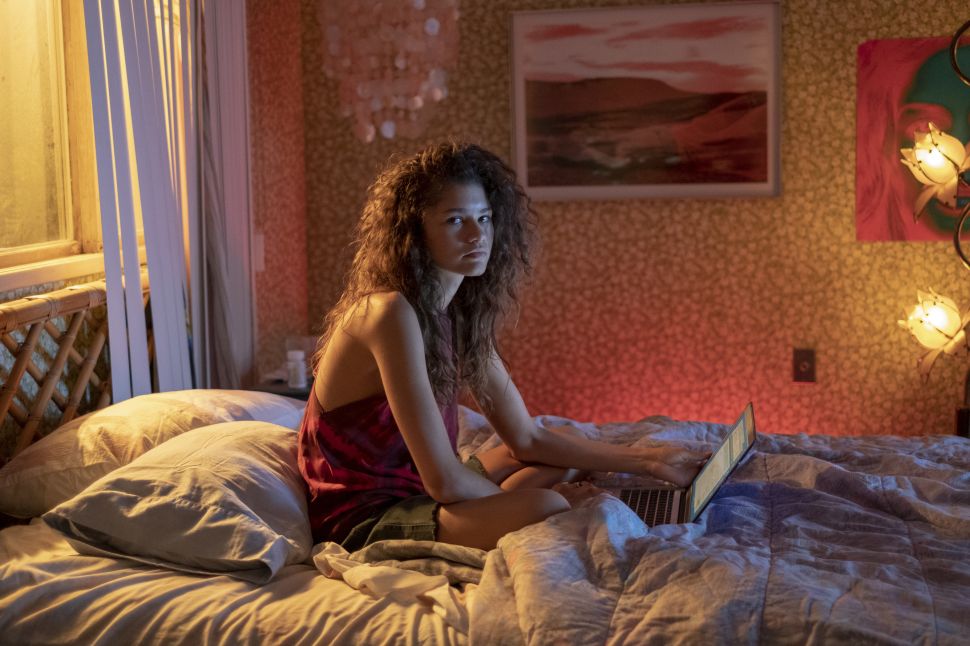