There’s a classic line from the 1960 election where LBJ tells JFK, “We’re winning in Ohio but you’re losing in Indiana.”  While general election polls are interesting, the race will be decided by states in the Electoral College. Democrats should look at who is winning in those head-to-head matchups with President Donald Trump, if they want to win back the White House in 2020.

Senator Bernie Sanders (I-Vt.) supporters insist that not only was their candidate more popular with voters than Hillary Clinton in head-to-head matchups against Trump, but also that voters want a progressive in their mold more so than a centrist like Joe Biden. Let’s look at the data to see if they are right.

“There is hard data that shows that a centrist Democrat would be a losing candidate,” proclaims Keith Spencer of Salon.com. I read his article and there isn’t. Sure, he cites French economist Thomas Piketty, who claims to have gathered mounds of data to show something we’ve known for years—that Democrats are doing better with richer and middle class voters with higher education, while those in the lower class and with lower-class education are trending Republican. It’s been going on for decades, as Pat Buchanan sought to tap into that same argument in the 1990s.  Ever look at the 2004 election exit polls?

Nothing in that article shows that a centrist would lose. Spencer does highlight Jeremy Corbyn of the British Labour Party as being similar to Sanders, an unfortunate link given that the ultra-left candidate couldn’t even beat the inept Prime Minister Theresa May or capitalize on the Tories torn-apart over Brexit. Tony Blair would have clobbered them by a 2:1 margin, even today.

But then, Spencer goes back almost 100 years ago to support his argument.

History speaks to Piketty’s truths. In the early 20th century, the rural Great Plains states were hotbeds of socialism; Kansas and Oklahoma particularly had vast socialist movements, parties and newspapers. The demographics of these states weren’t particularly different from now—lots of rural white people, many of whom are farmers. As the Oklahoma Historical Society notes: ‘In the first two decades of the 20th century the Socialist Party of Oklahoma consistently ranked as one of the top three state socialist organizations in America. At the party’s height in the elections of 1914, the Socialist Party candidate for governor, Fred W. Holt, received more than 20 percent of the vote statewide. In Marshall and Roger Mills counties, where the Socialist Party was strongest, Holt captured 41 and 35 percent of the vote, respectively. More than 175 socialists were elected to local and county offices that year, including six to the state legislature.’

So Sanders should be supported because socialists got some votes in these prairie states 100 years ago? I don’t think Trump needs to sweat the possibility of losing to the Vermont senator in Oklahoma and Kansas.

What Piketty and Spencer may not appreciate is some of those poor rural whites might be motivated more by religion, their eternal souls, than economics. Even poor rural whites who buy into economic arguments are more likely to blame Honduran immigrants than Wall Street tycoons or even their own CEOs.

Would Sanders Get Another Pass From the Media in 2020?

It also shows that even Sanders supporters aren’t deterred by linking him to socialism. But it’s a different story for most Americans. There’s the NBC poll showing that only 18 percent of Americans view socialism positively and 50 percent view it negatively. Being tagged a socialist, and Sanders’ unabashed support for such a label, is more likely to cost Democrats the 2020 election than it is to help win certain states.

Sanders supporters insist their candidate was more popular in 2016 against Trump than Hillary Clinton was. On this count, they appear to be correct. A check of all polls via PollingReport.com shows Sanders with slightly wider leads against Donald Trump than Hillary Clinton had, though those vary from poll to poll. The hypothetical matchups also differ by GOP candidate.

But there’s a caveat. Evidence shows that the media gave Bernie Sanders a pass, and crushed Hillary Clinton in the primary, according to reports from Harvard’s Shorenstein Center on Media, Politics and Public Policy.

Journalists made more references to her past history than they did to those of other candidates and focused on the negative. Her successful acts as secretary of state were seldom mentioned, and her tenure in the Senate, a period where she earned praise from both sides of the aisle, was all but ignored. Clinton’s coverage during the invisible primary phase of the 2008 campaign also leaves open the question of whether journalists hold her to a different standard.

As Clinton aide Zac Petkanas wrote earlier this year, “If Sanders’ team of consultants gave him some honest advice about what the 2020 election will be like, they’ll have told him it will be much harder than his experience in 2016—both because he won’t be facing Clinton, and because the differences between his policies and those of others in the field won’t be as distinct.”

Sanders supporters claim that internal polling shows their candidate is ahead in Pennsylvania, Wisconsin and Michigan. But what about other polls? And given that Sanders backers have argued that such head-to-head matchups do matter, let’s look at some non-internal polls for results.

In the general election, Quinnipiac has Biden beating Trump 53 percent to 40 percent, and Sanders up 51 percent to 42 percent. It also has Biden up by four points over Trump in Texas (the only Democrat to lead Trump there), while Sanders is losing by three points in the Lone Star State. Detroit News and WDIV-TV have both Democrats besting Trump in Michigan by 12 points.

In North Carolina, Biden would defeat Trump by 12 points, while Sanders only leads by eight points in the Tar Heel State, according to Emerson polling. Florida Atlantic University claims Sanders is losing to Trump by one point, while Biden and Trump are tied. In Arizona, OH Predictive Insights’ surveys show Biden up by five (51 percent to 45 percent) against the president, but Trump ahead of Sanders by nine points (46 percent to 37 percent). Finally, Quinnipiac polls find Biden ahead of Trump by 11 percentage points, and Sanders ahead by only seven points in Pennsylvania, while Emerson has Biden taking Nevada by four points. Sanders would lose the Silver State by two points in those same public opinion polls. 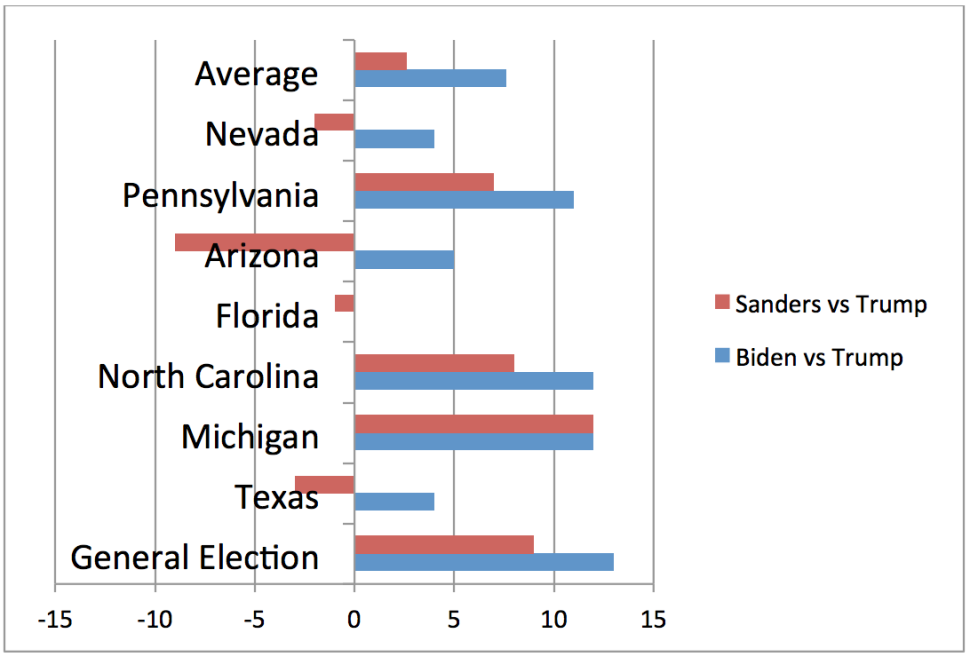 Oh, and Fox News has Biden up by 11 points over Trump, with Sanders ahead by only five.

What the evidence shows is that Biden and Sanders would both beat Trump in blue states, and likely in the popular vote category. But when it comes to most purple states and even some red states, Biden is a better bet to win.

It’s not conclusive proof that Biden will be the next president, but he’s a much better bet than Sanders to win against Trump—unless you value data from a 1914 Oklahoma governor’s race where a Socialist Party member got more than 20 percent of the vote.