Ah, the Democratic debates. Whenever these cursed battles of competing ideologies hurtle across our television screens and we gather together to watch with our friends or in a crowded bar, it’s inevitable that stray, petty observations will be made. Depending on your perspective, you might not put a lot of stock in what the candidates are saying with a year to go until the next election. On the other hand, if you have a brain that’s saturated with near-constant exposure to the news and social media, you might occupy your time by diligently scrutinizing the visages of everyone in front of you, looking for a facial expression that might betray someone’s true feelings.

One of the most compelling moments during Thursday night’s debate came when Senator Kamala Harris directly challenged Joe Biden’s stance on race throughout his career. “Vice President Biden, I do not think you are racist,” Harris began. “But it was hurtful to hear you talk about the reputations of two United States senators who built their reputations and career on the segregation of race in this country. You also worked with them to oppose busing. There was a little girl in California who was part of the second class to integrate her public schools, and she was bused to school every day and that little girl was me. So, I will tell you that on this subject it cannot be an intellectual debate amongst Democrats, we have to take it seriously, we have to act swiftly.”

This powerful and passionate statement from Harris was met with a firestorm of applause, and while Biden waited his turn to respond, his face didn’t so much contort as it did smooth out into something like a very smug mask. This placid expression, which barely conceals a roiling and petty frustration with being called out that’s just right below the surface, is a defining Biden characteristic. He’s so mad, but dedicated to appearing otherwise.

It’s likely that many of the candidates who graced the debate stage over the past two nights have received some kind of minor surgical enhancements to appear more polished on TV, Biden among them. But his 76-year-old face isn’t just curiously lacking in wrinkles, it’s taut with determination to be perceived as the “good guy.” His performance is completely transparent.

When Biden is deservedly challenged directly on his political record, which indeed includes sponsoring a 1975 bill which prevented communities from using federal funds to bus students in the name of school desegregation, he tends to get defensive, which is what he did Thursday night.

Told Biden we need someone stronger on reproductive justice, and after his reversal on the Hyde Amendment, we asked him to protect assault survivors. He said “nobody has spoken about it, done more, or changed more than I have”. I told him we deserve better. pic.twitter.com/YDtS4Ehs2d

Biden also displayed a trait last night that’s become something of a calling card for him. When someone asks him about a particular issue, he has a habit of saying something to the effect of “no one has done more” or “no one has done better” on that issue than he has, even if the facts don’t back up such a statement.

The message to be derived from his tiresome, predictable political posturing is that Biden is the kind of person who perceives apologizing, critical self-examination and actively listening to others to be activities which are somewhat beneath him. You know who else that sounds like? Our current sitting president. 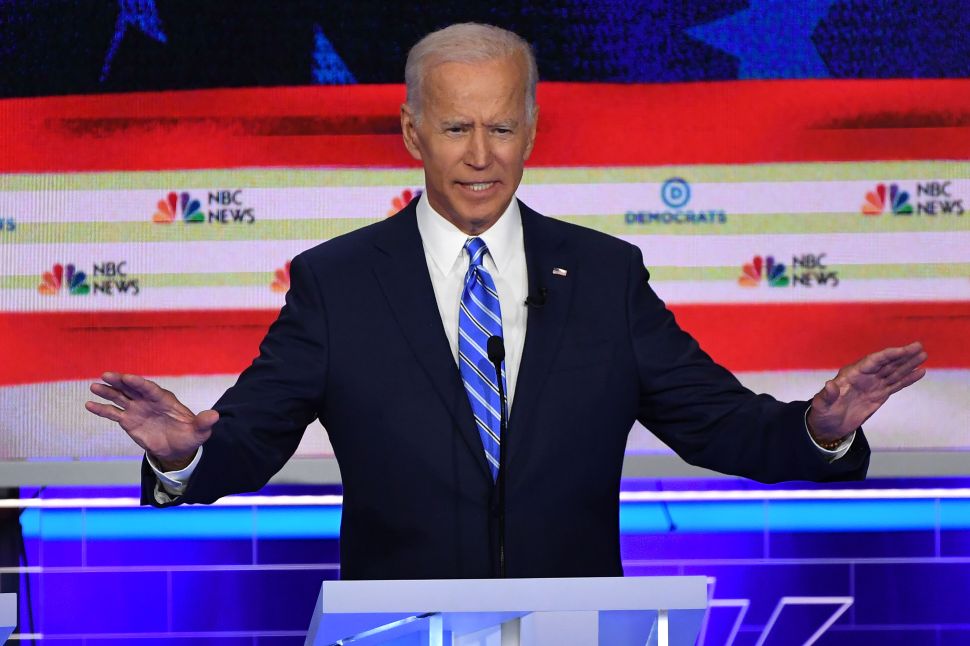