After the first debate, Joe Biden is still polling as the front runner in the 2020 Democratic primary. Here is some math proving there is a way for him to win the presidential race by a landslide. All he needs is the cooperation and support of the other 20-plus candidates.

First, math proof. Ask Hillary Clinton. Many polling analyists pointed out that Jill Stein (who?), the 2016 Green Party candidate, received more votes in three key states than Trump’s margin of victory over Clinton. Had Stein dropped out of the race and asked her Green Party backers to vote for Clinton, the world would be a very different place.

America is a representative democracy. We elect a president and congressmen. England, Italy and Israel are parliamentary democracies. Voters elect parties, who then make deals to elect presidents and cabinet members. This system is not perfect and often results in a fractured government, but it does have the advantage of incorporating many different political ideologies into one administration.

In a parliamentary system, key cabinet positions are often publicly announced ahead of an election, so that supporters of that party are assured that their preferred candidates are appointed. Simply put, by announcing the head of economic, defense, legal and educational ministries, the mystery of who will govern is removed.

How can the Democrats borrow from this system to win by a landslide in 2020?

If polling numbers prove accurate, Joe Biden will become the Democratic candidate. That means those who prefer Bernie Sanders, Elizabeth Warren, Kamala Harris or any of the other myriad candidates will have to decide if they want to show up and vote for Biden. They have to make a political and moral decision that their second or even lesser choice is better than the Trumpian alternative.

Suppose that decision was made far easier because their preferred candidate not only endorsed Biden but also agreed to govern with him. Based on voter registration and demographics, the Democrats would have overwhelming numbers in both the popular vote and the Electoral College.

What Biden has to do after his nomination is promise the key cabinet posts to his losing opponents and win their agreement to serve in those posts.

For example, Biden makes Sanders his head of the National Economic Council. It is now chaired by ex-Wall Streeter and talk show pundit Larry Kudlow. This would give the woke socialists a large seat at the table. Sanders has a huge base of Millennial supporters; they will turn out in droves to help him make real change in Washington. This is not draining the swamp but obliterating it.

Biden makes Warren the U.S. Attorney General. The antitrust and regulatory goals her very educated and vocal supporters want to see happen… could, if she were the AG. Look out predatory loan companies, monopolistic privacy-invasive tech companies and climate change enablers. Hello green infrastructure industries. As AG, Warren will send a sub-zero chill up the spine of the Hannity-Dobbs-Barr deep state theorists. A real Soviet-style purge of the purgers would help MSNBC overtake Fox News.

Biden appoints Mayor Pete Buttigieg as Secretary of State. With his Rhodes scholarship, military experience and all-around brilliance, Mayor Pete would bring real smarts to this difficult job. He has the personality and outlook to mend fences with our allies yet stand tall against our foes. He knows first-hand the calamity of combat and would be less eager to send working class sons, daughters and non-binaries to war.

Biden makes Harris head of the Department of Health and Human Services (HHS). Harris has some very strong appeal for those who want to see real social justice and progress on the environment, marijuana legalization and abortion. As HHS head, she could easily make administrative advances in these and other areas, as well as support women’s rights through legislative reform. Her base is diverse and vocal. If they show up at the polls to see her in Washington, it would make a difference.

You get it. This could be the revolution many in the country want, all within the confines of… democracy. While Fox News will, for absolute sure, believe this to be nothing less than a socialist revolution, these cries will fall primarily on the hard of hearing.

Biden could make Marianne Williamson press secretary. She has huge following and an Oprah endorsement. Biden will not find a more articulate quick witted truth teller than her.

Additionally, Biden would be acknowledging that this election is not about him. He would be offering an olive branch to the young, climate-concerned, socialists, minorities and sexually non-conventional. He would be making the tent not just big but all encompassing. The lesser candidates, those polling in the single digits like Beto O’Rourke and Amy Klobuchar, could get smaller jobs. He could bring everyone on board.

The political winds for the Democrats would be of hurricane force if everyone listed above actually campaigned for Biden. Collectively, they would out-shout Trump’s domination of the news cycle. The Democratic and progressive message would be everywhere and always. They would not even need former President Barack Obama to show up.

It is doable and within the realm of possibility. The only question is can everyone involved put their egos aside and join in the common cause for the good of their party and country? 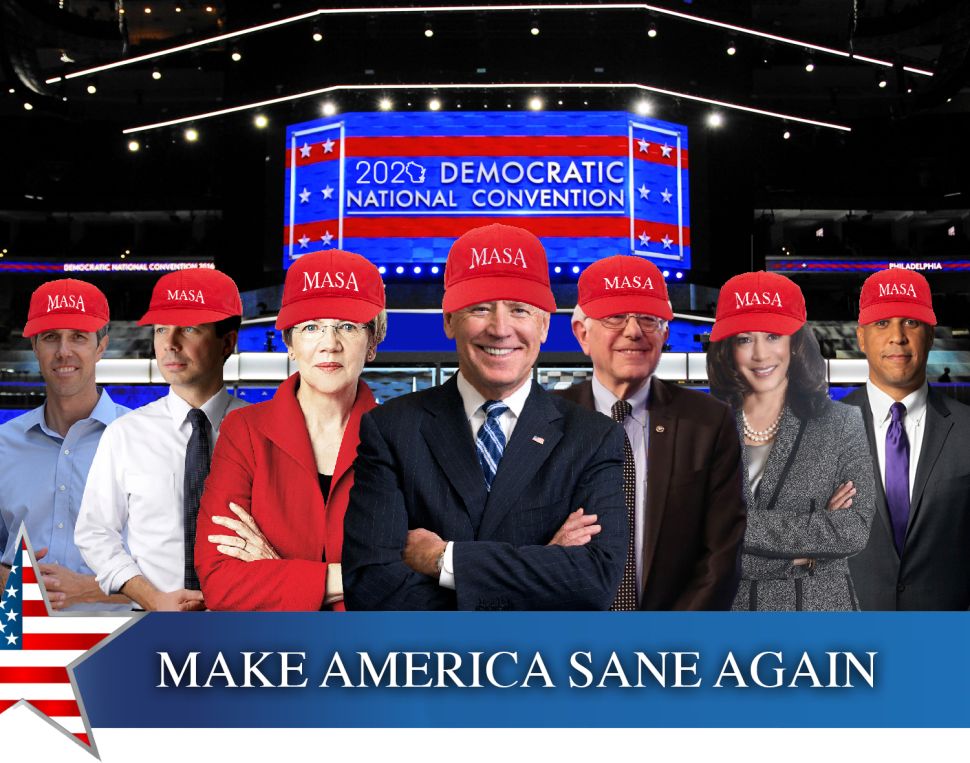