The second night of the Democratic debates was rife with interruptions and contentious policy clashes, with candidates stepping over each other’s buzzwords to articulate why they were best suited to reverse President Donald Trump’s agenda.

Whereas the previous evening was a drive-by of rhetorical flourishes which vaulted lesser-known names like Julián Castro and Tulsi Gabbard into the political stratosphere, Thursday’s candidates came to fight, especially when it came to civil rights.

Here are some of the most revealing moments.

Seizing off the former vice president’s mishaps in praising his past collaboration with segregationist lawmakers, Harris invoked her own childhood to show the policies from a different historical perspective.

“You also worked with [the segregationists] to oppose busing,” said Harris. “There was a little girl in California who was part of the second class to integrate her public schools, and she was bused to school every day and that little girl was me.”

Biden haphazardly attempted to blame Harris’ city council at the time. But the senator reprimanded him for not recognizing the role federal government plays in protecting civil rights.

The moment appeared to be carefully rehearsed, as Harris’ campaign tweeted out her childhood photograph as the debate wore on.

There was a little girl in California who was bussed to school. That little girl was me. #DemDebate pic.twitter.com/XKm2xP1MDH

Bernie Sanders has spent much of his campaign touting universal health care. But when confronted with a simple question on how he would implement the policy on a national level, the progressive failed to give specifics, and instead fell back on populist rhetoric that equated health care reform with the civil rights movement.

“I will tell you how we’ll do it,” said the senator. “We’ll do it the way real change has always taken place, whether it was the labor movement, the civil rights movement or the women’s movement. We will have Medicare for all when tens of millions of people are prepared to stand up and tell the insurance companies and the drug companies that their day is gone, that health care is a human right, not something to make huge profits off of.”

Spiritual author and fringe candidate Marianne Williamson made her national debut by questioning whether policies are important in elections.

“I’ll tell you one thing, it’s really nice if we’ve got all these plans, but if you think we’re going to beat Donald Trump by just having all these plans, you’ve got another thing coming,” she argued. “Because he didn’t win by saying he had a plan. He won by simply saying Make America Great Again. We’ve got to get deeper than just these superficial fixes, as important as they are.”

Eric Swalwell hit Biden early on for being a relic of a Democratic Party long gone, even using a speech the former senator delivered in the ’80s as ammunition for his point.

“I’m still holding on to that torch,” responded Biden after a question from NBC’s Lester Holt.

Buttigieg Admits the Limits of Power

Pete Buttigieg arrived on the the debate stage amid the worst crisis of his political career, after a white police officer shot and killed a 54-year-old African American man in South Bend, Indiana. When asked by NBC’s Chuck Todd why his city’s police force had failed to hire more black members, Buttigieg answered, “Because I couldn’t get it done.”

“My community is in anguish right now,” said the Democrat. “I could walk you through all of the things that we have done as a community, all of the steps that we took, from bias training to de-escalation, but it didn’t save the life of Eric Logan. And when I look into his mother’s eyes, I have to face the fact that nothing that I say will bring him back.”

This explanation did not satisfy Swalwell, who needled his rival on the fact that the officer in question did not have his body camera on.

“You should fire the chief, if that’s the policy and someone died,” said Swalwell, prompting Buttigieg to glare his way. 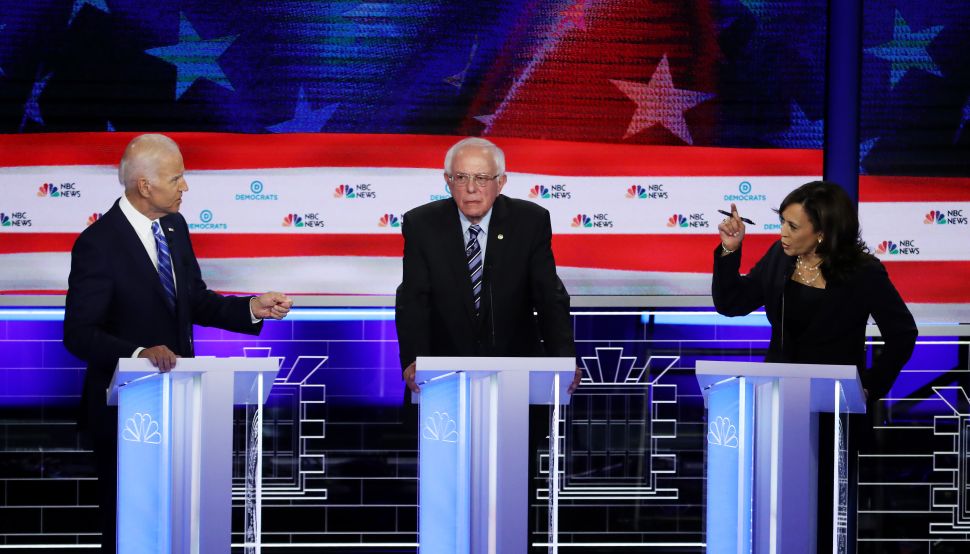