For a particular kind of perhaps easily-mockable person, there’s nothing more thrilling than an episode of Antiques Roadshow, a program in which everyday Americans have their heirlooms appraised by experts in the hopes that they’ll be worth significant amounts of money. A family in Edinburgh, Scotland recently received an Antiques Roadshow-caliber shock when they brought an item that had been tucked safely away in a drawer for 55 years to Sotheby’s auction house in London. What they had assumed was simply an “Antique Walrus Tusk Warrior Chessman” was in fact identified as one of the Lewis Chessmen, a group of historically significant medieval chess pieces which are believed to have been made in Norway around AD 1150-1200.

As you can probably imagine, this stately little figure is worth rather a lot: although it was purchased by the family’s grandfather for a mere five pounds in 1964, a representative from Sotheby’s said today that the piece is expected to sell at auction in July for between 600,000 pounds ($670,000) and 1 million pounds ($1.26 million). Not bad for a humanoid game piece that’s missing one eye! “That kind of weather-beaten, weary warrior added to its charm,” Sotheby’s art specialist Alexander Kader told BBC News. Kader also added that more Lewis Chessmen pieces continue to be missing. “There are still four out there somewhere,” he said. “It might take another 150 years for another one to pop up.”

Until that day comes, there’s a lot to be appreciated about the Lewis Warder piece. As Kader pointed out, the newly-discovered little chess soldier looks a little beaten up, but that doesn’t detract from his charm. Plus, even if you’re not familiar with the name “Lewis Chessmen,” it’s highly possible that you’d recognize them if you saw them.

That’s because these beautifully designed objects are so thoroughly woven into historical iconography, they’ve received central placement in cinema: in the movie Harry Potter and the Sorcerer’s Stone (heard of it?) the titular hero and his best friend Ron play a dynamic game of “wizard’s chess” with the Lewis Chessmen.

Plus, the chessmen themselves act as physical markers of the extraordinary cultural exchange associated with the British Isles in the Middle Ages. According to the British Museum, which houses many of the Lewis pieces, “chess arrived in Christian Europe via the Islamic world, where the game was adapted to reflect medieval European society.” The likely-Norwegian Lewis chess pieces reflect the societal hierarchies of the period in which they were made, and each individual figure telegraphs meaning with its gesture and its clothing.

One can only imagine who the Lewis Warder piece was modeled after, but it’s at least evident that he had a pretty impressive scowl. 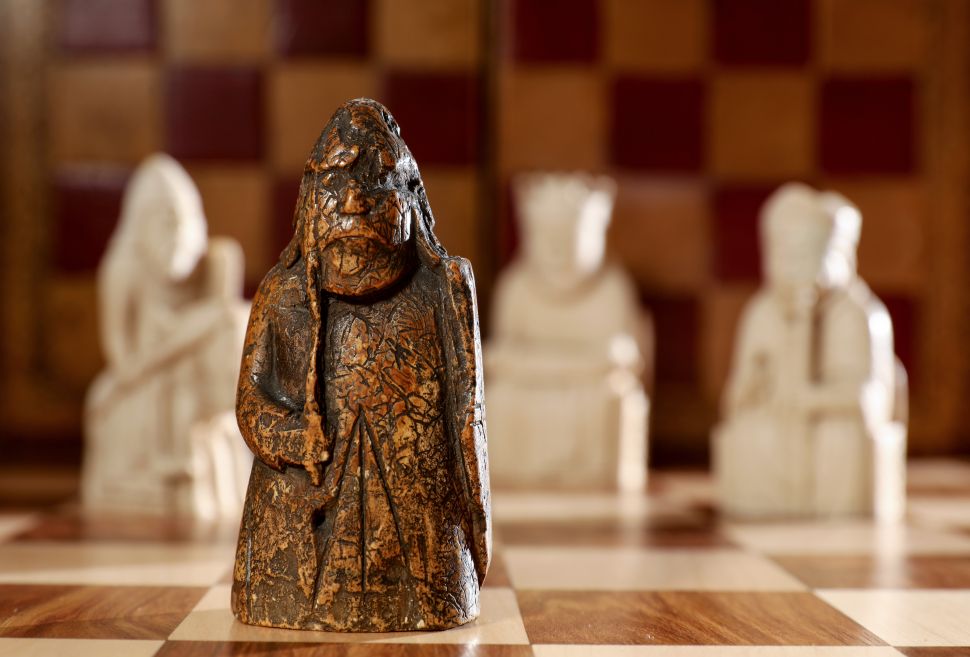