“I’m not going to the fucking White House.” – @mPinoe pic.twitter.com/sz1ADG2WdT

Remember when it used to be the highest honor possible bestowed upon an athlete to be invited to the White House by the President of the United States after a championship win? That seems like such a distant memory.

Long before there was a commander-in-chief who locks children up in cages, has 22 allegations of sexual misconduct, denies climate change, and calls white supremacist very fine people, athletes were thrilled to come to the White House as a topping on their celebration cake for a championship win.

Yes, it’s a toxic new era—in which athletes don’t want to plaster on an uncomfortable smile for an awkward presidential photo-op.

Rapinoe has been outspoken about social justice issues and is one of 28 players suing the United States Soccer Federation for equal pay for the women’s team.

Just this week, President Donald Trump told The Hill that he didn’t think it was appropriate that Rapinoe protested during the national anthem. And, in probably one of Trump’s biggest lies to date, he also stated: “I love watching women’s soccer.”

Yesterday morning, Trump acknowledged Rapinoe’s “I’m not going to the fucking White House” comment by firing off a rambling tweet about how he’s lowered black unemployment and in true dictator fashion mentioned that Rapinoe should not disrespect our country.

Yes, Trump took time out of his presidential day to pick fights with women soccer players, while we’re in the midst of a humanitarian crisis at the U.S. border.

Women’s soccer player, @mPinoe, just stated that she is “not going to the F…ing White House if we win.” Other than the NBA, which now refuses to call owners, owners (please explain that I just got Criminal Justice Reform passed, Black unemployment is at the lowest level…

….in our Country’s history, and the poverty index is also best number EVER), leagues and teams love coming to the White House. I am a big fan of the American Team, and Women’s Soccer, but Megan should WIN first before she TALKS! Finish the job! We haven’t yet….

….invited Megan or the team, but I am now inviting the TEAM, win or lose. Megan should never disrespect our Country, the White House, or our Flag, especially since so much has been done for her & the team. Be proud of the Flag that you wear. The USA is doing GREAT!

And it’s not that Rapinoe has an aversion to visiting the White House; she joined her teammates, after winning the 2015 World Cup, where they were warmly greeted by former President Barack Obama who didn’t bitterly disparage them for their global victory, but instead said, “This team taught all of America’s children that ‘playing like a girl’ means you’re a badass.”

And no one on the 2015 winning World Cup team looked embarrassed to be there.

In regards to the “President’s” tweet today, I know women who you cannot control or grope anger you, but I stand by @mPinoe & will sit this one out as well. I don’t support this administration nor their fight against LGBTQ+ citizens, immigrants & our most vulnerable.

Not to mention, back in May, teammate Alex Morgan also stated she would decline an invitation to White House for a meet-and-greet with Trump after the World Cup. “I don’t stand for a lot of things the current office stands for,” she said, adding that she opposes the administration’s policies about separating families at the U.S.-Mexico border.

But it’s strange how Trump didn’t go after Morgan or Krieger.

And, isn’t standing up against tyrannical powers that oppose the Constitution and set out to suppress the weak and downtrodden as patriotic as one can get? Also, winning the World Cup in the name of the United States is one hell of a patriotic thing…

By no means would Rapinoe, and the women’s World Cup team, be the first championship athletes to skip out on an invitation to the White house.

Since Trump has been in office, 20 teams in major sports have won championships. Half of the 20 teams were either not invited or declined an invitation from the White House. Those who have shown up have had notable players absent from the event, or players who simply appeared embarrassed to be there. And the whole affair always looks really strained and uncomfortable.

In 2017, the Golden State Warriors decided not to go to the White House when they were invited after winning the NBA title.

“The White House is a great honor, but there are other circumstances that we felt not comfortable going,” said all-star guard Klay Thompson, referring to Trump berating African American athletes who protested during the National Anthem.

Trump, in turn, attempted to show he had the upper hand by taking to Twitter and revoking the Golden State Warriors’ invitation.

Going to the White House is considered a great honor for a championship team.Stephen Curry is hesitating,therefore invitation is withdrawn!

That pretty much says it all on how tainted the “great honor” has become.

So, instead of celebrating their NBA championship with Donald Trump, the Golden State Warriors opted to spend their time at the National Museum of African American History and Culture, visiting the facility with local D.C. students.

The Philadelphia Eagles also had their White House visit canceled by Trump. After winning the 2018 Super Bowl, several Eagles players said they would not attend the visit.

Trump tweeted about cancelling the event: “Staying in the Locker Room for the playing of our National Anthem is as disrespectful to our country as kneeling. Sorry!”

The Philadelphia Eagles Football Team was invited to the White House. Unfortunately, only a small number of players decided to come, and we canceled the event. Staying in the Locker Room for the playing of our National Anthem is as disrespectful to our country as kneeling. Sorry!

Also to be noted:

In 2016, when the New England Patriots won the Super Bowl, half of the players did not attend the ceremony, and at least five cited objections to Trump as their reason.

When the 2017 Houston Astros World Series champs came to the White House, Carlos Correa and Carlos Beltrán, both Puerto Rican players, skipped the trip. Perhaps they weren’t thrilled to smile alongside the man who ridiculed the mayor of San Juan and whose only gesture of compassion after Hurricane Maria was throwing paper towels at the citizens.

The Washington Capitals paid a visit to the White House in 2018, when they won the NHL championship. Several players, including star goalie Braden Holtby, skipped the trip. Holtby reasoned that he wished “to stay true to my values.”

When the Boston Red Sox were first scheduled to visit the White House in 2019, after winning the World Series, their trip was postponed due to the government shutdown over the border wall. When the trip was rescheduled, one-third of the players were not present. Manager Alex Cora, who is also from Puerto Rico, skipped the ceremony and said he does “not feel comfortable celebrating in the White House.“

Athletes turning down invitations to the White House is a direct reflection on the history of failed policies, horrific blunders and despicable acts of the Trump presidency.

It’s now a “great honor” to be a champion and say, “I’m not going to the fucking White House”—and then celebrate without having to tensely smile alongside Trump.

As for Trump, who responded to Rapinoe’s comment by spitefully inviting the entire women’s World Cup team to the White House win or lose, he can enjoy a lonely time in a large, empty room with his fast food feast—eating curly fries with Stephen Miller. 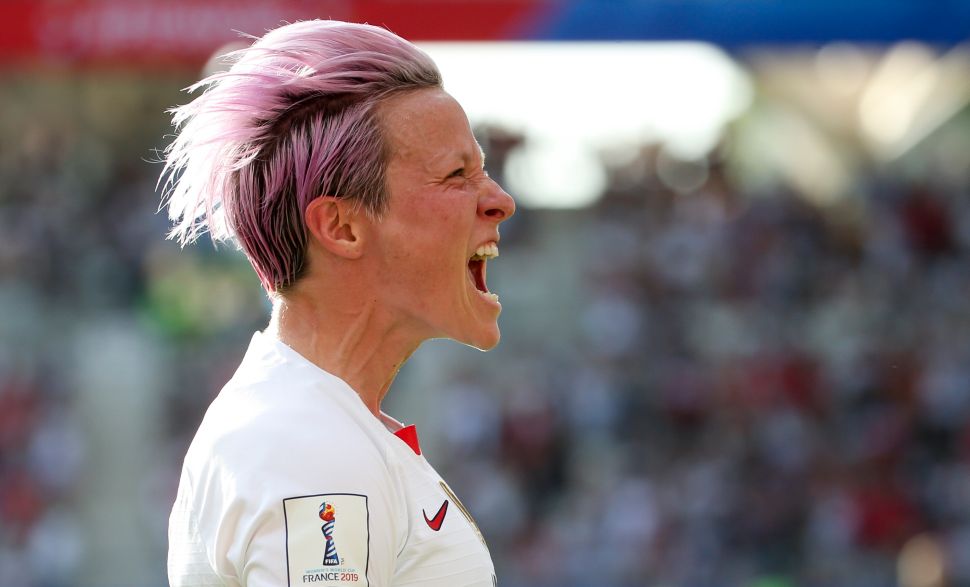