A little green guy named Pawny—an alien chess piece voiced by comedian Kumail Nanjiani—gets most of the very few laughs there are to find in Men In Black: International.

For example, when encountering a particularly cool car (a Lexus), Pawny says, “That’s what I’m talking about!” It’s the kind of exclamation that would have been made with rakish swagger by Will Smith in any of the previous movies in the series which began life twenty-two years ago with director Barry Sonnenfeld’s mildly subversive sci-fi comedy, one that served as ideal showcase for Smith and his stone-faced partner, Tommy Lee Jones.

That today we are forced to rely on the Great Gazoo—or at least a close cousin—to inject even a modicum of humor and excitement into the proceedings is a sign of just how empty a vessel this franchise has become. We made it through ten seasons of The Flintstones before Harvey Korman’s virescent intergalactic wisecracker made his debut, and this is only the fourth Men in Black movie. Has it really come to this?

Certainly, Pawny is mildly cute and, wielding a tiny sword that looks like it might struggle to mince garlic, mostly harmless. Those are also the nicest things you can say about the movie he is in, a largely toothless and wit-free reboot that empties the last of the originality and vivacity that has been steadily leaking out of the franchise with each subsequent installment.

The main issue is the script. The tale it tells is shopworn: MiB stan Molly/Agent M (Tessa Thompson) becomes an agent after sneaking into MiB’s headquarters (imagine if the Secret Service worked that way) and is assigned to the London branch, where a high-ranking officer may be a double agent working on behalf of Earth’s destruction. She partners with Agent H (Chris Hemsworth), a Lothario who is coasting on his laurels and finds her enthusiasm exhausting.

Their obstacles include psychotic shape shifting alien hitmen (enough already!) played by French dancers and clothing designers Les Twins in their film debut, a ruthless three-armed arms dealer (Swedish actor Rebecca Ferguson from 2018’s Mission: Impossible-Fallout) and an obnoxiously officious fellow agent (Rafe Spall). The twins fare best, only because they have the fewest lines, and the dialogue throughout the film is consistently clumsy and leaden no matter who is forced to speak it.

What the creators of this iteration seem to have forgotten is that original’s strength lay in the fact that it (like its suits) seemed perfectly tailored to fit its stars’ talents. Here, you could plug and play any two young actors into the lead roles and come up with the same result. The two MCU vets struggle to do their best with criminally underwritten characters. While Thompson manages to make Molly’s ambition and book smarts playful and appealing, it is difficult to distinguish between Agent H’s insouciance and Hemsworth’s lack of engagement with the material he has been given.

Director F. Gary Gray (2015’s Straight Outta Compton and 2017’s The Fate of the Furious, both far better films) employs two main weapons against the tediousness of what confronted him on the page: CGI and music.

The former is substandard in terms of rendering and character design. It’s more reminiscent of the era of overstuffed, soulless, and unconvincing Star Wars prequels than what we are accustomed to these days. On the other hand, the score—written by original series composer Danny Elfman aided by Chris Bacon (an Emmy nominee for Bates Motel), bubbles with a pulsing irony and self-awareness that the script only wishes it possessed. But there is too much of it. Smothering every last scene, the music ends up feeling like the gravy in Navy boat cream chipped beef, meant chiefly to distract you from what lies beneath.

Like the previous films of the series, the primary pleasures can be found in the margins: the throwaway jokes about which celebrities are aliens (Childish Gambino? Yes!) and the comic fumbling of various tentacled, feathered or four-eyed side characters. But it is all done with less surprise, imagination and bite than before. Frank the Pug, the curmudgeon from the first two installments who appears here in a single scene (voiced again by puppeteer Tim Blaney), could eat Pawny for lunch.

Of course, if you have been hit by neuralyzer—the memory-erasing gadgets issued to MiB agents and used by them with impunity—and had forgotten the earlier films as well as all the many sci-fi tropes this movie recycles, the film works quite a bit better. I saw it with my 12-year-old daughter for whom it served as her introduction to the MiB world, and she found it to be good, if innocuous, fun. Even still, Men in Black: International was empty enough to provoke a healthy and necessary cynicism.

“Basically,” she said as we exited the crowded theater, “that was a very long, very expensive Lexus commercial.” 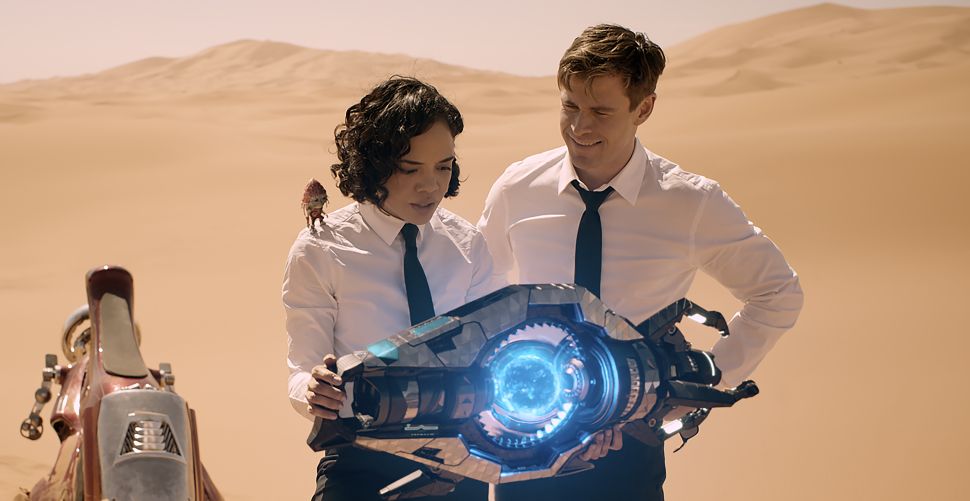