Since the New Museum opened its glossy SANAA-designed building on the Bowery in 2007, the institution has established itself as New York’s leader in contemporary and experimental art—a champion of works not widely shown in major museums. Now, 12 years on and with attendance having increased more than sixfold since the institution’s opening, the New Museum has unveiled plans for major expansion into a second building.

Tasked with the expansion was OMA, the Dutch firm co-founded by Rem Koolhaas and Shohei Shigematsu, who, rather than repurposing the existing structure as they have done in the past with the Fondazione Prada in Milan and the Garage Museum of Contemporary Art in Moscow, decided to begin from scratch. Today, the architects revealed the plans for a geometric design intended to integrate seamlessly with the museum’s flagship building.

SEE ALSO: Why the Sudden Spotlight on Australian Aboriginal Art?

Scheduled to begin next year and be completed in 2022, the museum’s expansion into the adjacent property on 231 Bowery, which the New Museum has owned since 2008, is intended to address some of the original building’s problems, namely its crowded lobby, lack of natural light, and poor circulation.

In addition to three new elevators and an expanded lobby and bookstore, the new structure will double the museum’s exhibition space and provide new space for community and educational programs, a permanent home for New INC, the museum’s cultural incubator, and increased public amenities like an 80-seat restaurant.

The New Museum news coincides with plans of several New York institutions for expansion, many of them, like the New Museum, paying increased attention to educational programming and public engagement. The Museum of Modern Art’s long-anticipated $400 million expansion, expected to open on October 21, in addition to more than 40,000 square feet of gallery space, will include a studio space for programming and performances and a second floor experimental platform for conversations and workshops. The Frick Collection’s plans to expand and renovate its 1914 Gilded Age mansion, which (after a long tug-of-war with the New York City Landmarks Preservation Commission) are expected to break ground in 2020, include a new education center and room for special exhibitions adjacent to the permanent galleries.

But why are museums suddenly feeling the pressure to add more space? MoMA’s addition of 40,000 square feet has been attributed to the opportunity to provide a more expansive view of art history, allowing the institution to spotlight more works by women, Latin Americans, Asians, African Americans and other minorities often excluded from the Western canon. Meanwhile, at the Los Angeles County Museum of Art (LACMA), a desire to “forge an enhanced relationship with art and the cultural programs [they] offer,” has been cited as one of the primary reasons for its major overhaul, but after numerous contentious redesigns, the museum has been squeezed into a space two-thirds its size.

The New Museum’s 60,000 square feet expansion to a relatively new building—especially in comparison to MoMA and the Frick—shows just how aware museum directors are of the need to address the changing demographics and demands of their audience, especially when museums across the country are under more pressure than ever to change for both practical and ethical reasons.

“The building gives us the opportunity to continue to experiment with new formats and models around various areas of programmatic focus,” said Massimiliano Gioni, the museum’s artistic director in a statement. “These areas include new productions and ambitious new commissions; contextual exhibition presentations; studio space for artist residencies; and international partnerships and collaborations with peer institutions around the world.” 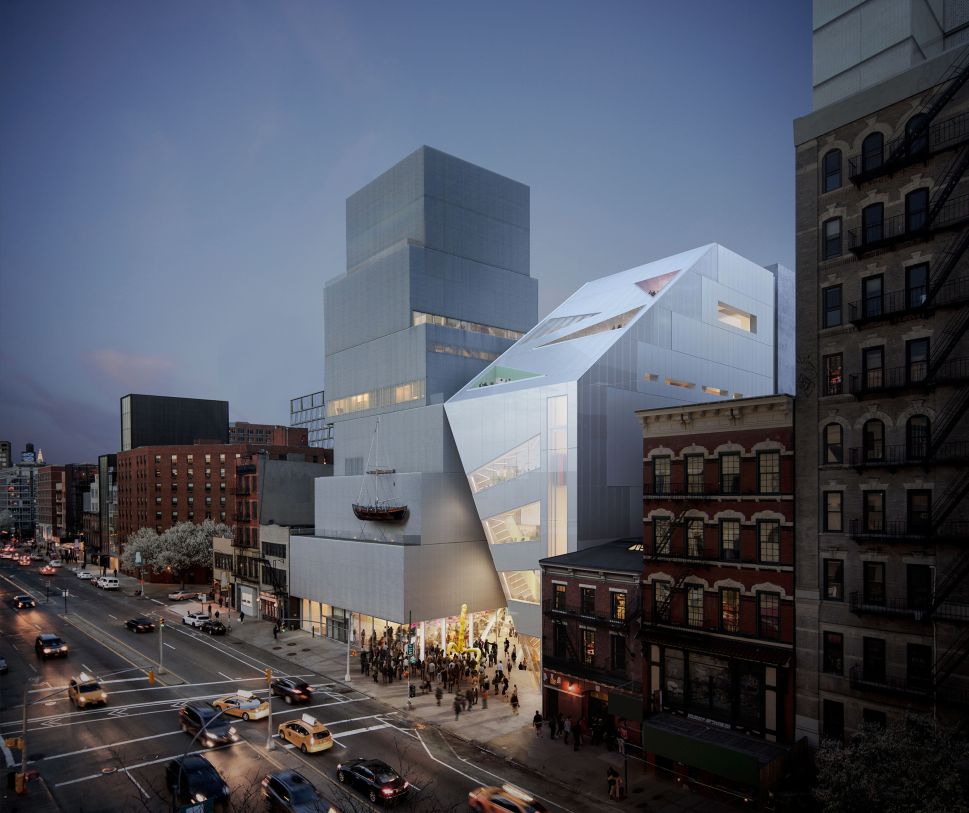