A lot was strange about City Ballet’s Spring season, but nothing was stranger than the programming. Question: Who was responsible? Was some of it?…all of it?…none of it?…a leftover from the Peter Martins regime? It’s hard for me to believe that Martins would have concocted a program in which a four-part ballet to highly romantic music (Brahms-Schoenberg Quartet) was followed by another four-part ballet to highly romantic music (Tschaikovsky Suite No. 3). Nor, I think, would he have cast them so that one dancer, Sara Mearns, closes the first one and opens the second one. But then Mearns is all over the repertory. It doesn’t seem to occur to anyone (including herself) that she’s more suited to some roles than to others.

Equally peculiar: a mega-program that opened with a classic closer (Stars and Stripes) and closed with The Times are Racing—prime Peck, but stronger as an opener. Stuffed in the middle was the luscious Slaughter on Tenth Avenue, and in case that wasn’t enough, up popped Tarantella. At the second intermission, scores of people were jumping ship—not because they weren’t having a good time but because they needed to get home to bed.

There could be no programming problems in the season’s final week, since it was entirely devoted to that Balanchine masterpiece A Midsummer Night’s Dream. It looked well rehearsed, and it wasn’t anyone’s fault that injuries—notoriously prolific at this point in the year—eliminated Maria Kowroski, Tiler Peck and eventually Taylor Stanley (I was really looking forward to his Puck). The company is so crammed with top-notch dancers that everything went smoothly, but I especially missed Kowroski’s Titania—she’s always at her best in signature Farrell roles, and Mearns is just not a Titania: lacking grandeur and hauteur, she substitutes push. (She was at her best in the fraught “Élégie” section of Suite No. 3.) On the other hand, Miriam Miller, whom four years ago Martins thrust into the role when she was still an apprentice, was again completely satisfying with her imposing look and imperial bearing. In another Farrell role—the Striptease Girl in Slaughter—Teresa Reichlen, in her showgirl mode, was appealing and touching. As the Hoofer, Tyler Angle was his usual model self—he never lets you or himself or his partner down—but he doesn’t really have Hoofer pizzazz. Remember: the original (back in the Thirties, in On Your Toes) was the great pre-Oz Ray Bolger; when Balanchine added it to the City Ballet repertory, Farrell’s Hoofer was Arthur Mitchell.

The two Oberons I saw, Daniel Ulbricht and Anthony Huxley, were both excellent—and keep in mind that Oberon is probably the most exacting male role Balanchine ever devised. Both men conquered the difficulties and projected a certain degree of royal command, but neither has the explosive virility of the original, Edward Villella. The two Pucks I saw—though neither of them gave off the almost feral glamour of the original (Arthur Mitchell again)—were also excellent: Harrison Ball, with his radiant and easy classicism, and the electric (and ultra-impish) Roman Mejia. The various pairs of human lovers—the forlorn women and the dopey men—were perfectly fine. They always are; this is non-fail Balanchine territory. Yet neither Ashley Laracey nor Erica Pereira rose to the eloquent despair that Patricia McBride, the original Hermia, brought to her searing solo, a moment when human feeling should break through the fairy world of Dream. Particularly strong, however, was Lauren King’s Helena.

Every time you see this amazing work you’re knocked out by the story-telling genius Balanchine brought to the first act. Bugs, butterflies, fairies (and their King and Queen), Puck, Bottom and his “rude mechanical” mates, the two pairs of lovers, Hippolyta and her Hounds—they scurry and strut and languish and anguish across the stage, and there’s never a moment when you don’t know exactly what’s happening, without benefit of synopsis. Nor do you need to know Shakespeare to grasp Puck’s wry message to the world: “Lord, what fools these mortals be!”

For many of us, however, Balanchine’s crowning achievement in Dream is the unique pas de deux he plants in the midst of the formal wedding celebrations that constitute Act II. A man and a woman—unnamed, with no connection to the story or to any of the other characters—enter into a slow, calm, protracted dance conversation of exquisite subtlety. Here is Balanchine’s response to the farcical shenanigans of the human lovers and the untoward bickerings of Titania and Oberon. Here is a vision of ideal love, more Dantean than Shakespearean.

I was fortunate enough to see the same pair twice, Sterling Hyltin and Amar Ramasar. There has been no lovelier, more exemplary, ballerina in this role since Violette Verdy, the original; I was holding my breath as she seamlessly spun out the thread of Balanchine’s intentions. Ramasar, an outstanding partner always, presented her generously and impeccably. He is back with the company after the recent scandals, now that an arbitrator has insisted that he be restored. The audience welcomed him with a smattering of applause and no sign of rebuff—an appropriate manifestation of healing, which is, finally, what A Midsummer Night’s Dream is all about. 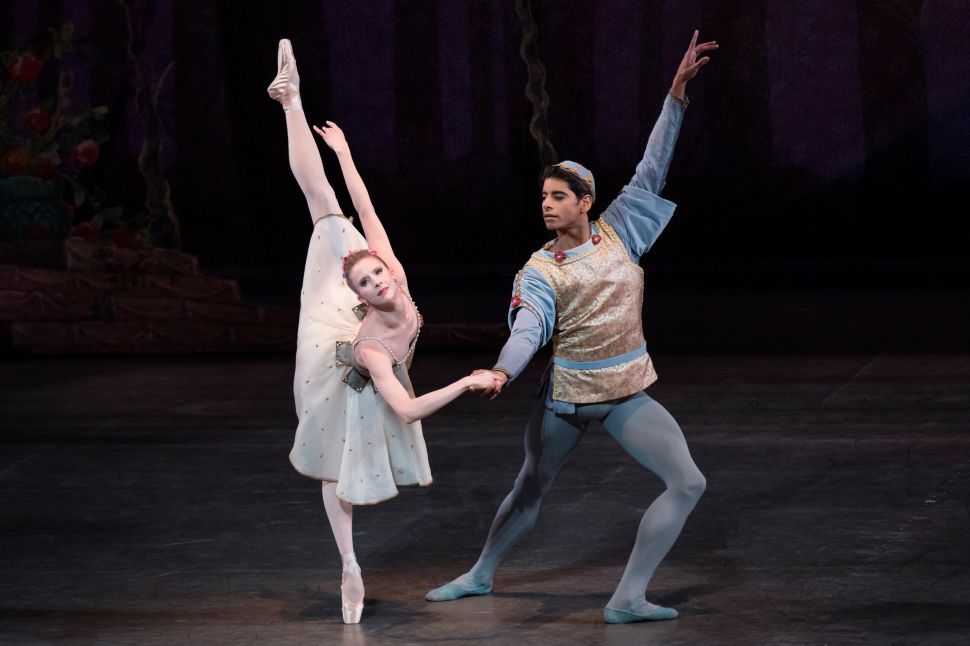