With Ophelia, Australian director Claire McCarthy dusts off a corny, overwrought young adult novel by Lisa Klein to re-imagine Hamlet from his mad girlfriend Ophelia’s point of view. The result is pretty to look at, with the misty lakes and foreboding forests of Denmark beautifully photographed and the costumes lavishly designed, but the sad (and boring) result has none of the bold thrust or festering passion originally created by the Bard. It’s a revisionist attempt to make the denizens of Elsinore seem modern and more accessible, but comes off more like a sophomoric re-make of Citizen Kane in the image of Fox News.

SEE ALSO: ‘The Command’ Is a Polished, Heartbreaking Account of the Kursk Submarine Disaster

With Daisy Ridley from the recent Star Wars films cast in the image of contemporary womanhood peering into a mirror of emboldened feminist enlightenment, the contrivances overwhelm. In this context, Ophelia is making up for lost time as a girl who was denied the privilege of doing her homework with the boys as a child, and turned into a rebellious, headstrong symbol of ambition in a domineering man’s world. The men in Ophelia are now second-rate tagalongs, but it’s still the women who end up floating in the swamp.

Just as Rosencrantz and Guildenstern Are Dead revisited Hamlet from the vantage point of two childhood friends recruited by his father, King Claudius, to spy on the prince, the classic tragedy is now revised through the eyes of the girl he drove insane, losing touch with the reality of one of the greatest plays ever written.

All I could think of was Jean Simmons’ gorgeous, haunting, enduring and quintessential Ophelia in the 1948 film starring Laurence Olivier. Ridley looks uneasy and out of place in 17th century gowns, like she had a wad of bubble gum behind her ear and a cell phone hidden in her costume. There’s something lifeless about the whole thing, suggesting the film not only fails to expand or improve on the immortal play but should have stayed on the printed page, if anywhere at all.

This Ophelia is introduced as a mischievous, high-spirited kid whose father, Polonius, is a social climber in the royal palace. Queen Gertrude (Naomi Watts) likes the girl’s spunk and takes her under her wing as a lady-in-waiting. Years pass and petulant, pouting Hamlet (George MacKay) returns from college wearing too much eye makeup to find Ophelia as a go-between with his mother and her twin sister Mechtild (a dual role for Watts). Mechtild is the wicked sorceress who provides the drugs for Gertrude to kill the king, with the help of his brother and her lover Claudius (a miscast Clive Owen, in a hilarious wig that kills his performance instead).

Additional scenes and dialogue re-written by Semi Chellas border on the absurd. You won’t believe what they’ve done to the famous “get thee to a nunnery” speech. The invention of a secret marriage between Hamlet and Ophelia borrowed from Romeo and Juliet is a particularly good example of how silly, contrived and pointless it all is. The noise of combat you hear in the background is not the impending war that leaves the stage littered with collateral damage every time it is staged. It is now the sound of William Shakespeare, turning over in his grave. 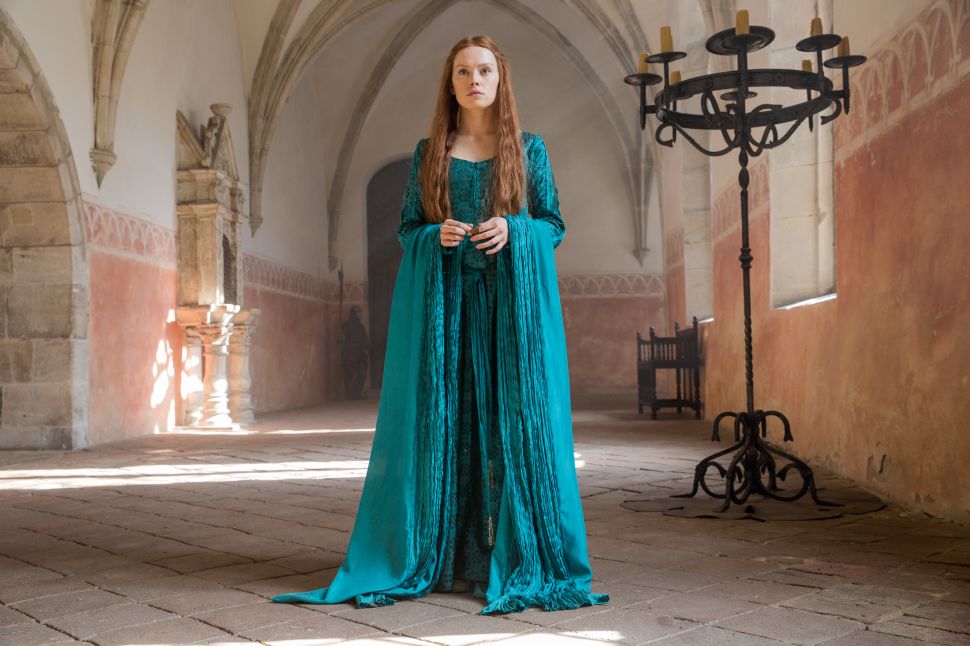