The second season of FX’s Pose opens as Blanca (MJ Rodriguez) and Pray Tell (Billy Porter) are taking a boat to the Bronx’s Hart Island, where, to this day, you can visit the resting places of over a million people who were unceremoniously buried in mass graves. Seventeen of those people, including one child marked SC for “Special Child,” are buried separately, deeper, and quarantined to the island’s southern tip—in 1985, so little was known about AIDS that some feared it could spread even after death. Blanca and Pray Tell, both HIV positive, are there to pay their respects to a friend who died of the disease. They talk of funerals, they pray, they wonder what to do next. This opening feels like a slight departure from the last year’s wonderful, revolutionary celebration of queer joy, but it sets the tone for the second season: It’s 1990, the AIDS epidemic is ongoing, but Blanca and Pray Tell are still looking toward the future.

Created by Ryan Murphy, Brad Falchuk and Steven Canals, Pose centers on the New York ball scene primarily through a group of queer and trans people of color (and with multiple trans talent on- and off-screen). Arguably the best new show last year, Pose is a lively and vivid portrait of a specific world, a show that thrives on optimism and celebrates being your authentic self. It is, at its core, a story of family—not your biological family but your logical family, your chosen community.

Blanca is the mother of House Evangelista, which consists of Angel (Indya Moore), a trans woman looking to start a modeling career, Damon (Ryan Jamaal Swain), a young and talented dancer and others. Their familial bond, more than anything, is the driving force of the series: they are fiercely protective and supportive; they share each other’s pain and triumphs.

The second season of Pose (critics were sent the first four episodes) is a lovely return to this family, although it does occasionally stumble due to some odd plotting or stylistic choices (particularly in the third and fourth episodes) as well as its attempt to cover far more ground than it has the time for. The show’s aim is always admirable, even when a bit frustrating, and it does take an especially smart approach to one ongoing plot.

This season’s decision to skip ahead a few years to 1990 is a successful choice, now launching us into the era of Madonna ‘s “Vogue,” which fills Blanca with optimism, hoping that the hit song will shine a bright light on ball culture and bring it to the masses. She thinks things are going to change. (Pray Tell, however, aptly points out that “every generation thinks they’re going to be the ones who are finally invited to the party.”) But the sad joke, Blanca notes in a later episode, is that they’ve been “trying to break out into the mainstream for years” only to have it finally happen “in the middle of a plague.”

While the AIDS crisis always loomed over the first season, it’s now a much more active and urgent presence, which results in season two feeling darker and full of anger. But it’s an important anger, as Pose dives into the harrowing reverberations of the crisis: how the deaths feel never-ending, how churches and politicians are making things worse, the feelings of survivor’s guilt, the understanding that no one seems to care that queer people (and especially queer people of color) are dying.

One of the smartest and most effective story lines this season is, as we saw in the premiere episode, Pray Tell joining the (real) AIDS activist group ACT UP. His passion is born of both fury and sadness and his insistence on everyone else getting involved trickles down from the weekly family dinner to the ballroom. We see him smash a trophy because Elektra (a perfect, scene-dominating Dominique Jackson) refuses to join a protest. (The protest, beautifully directed by Gwyneth Horder-Payton, is likely inspired by ACT UP’s famous 1989 action in St. Patrick’s Cathedral.)

Pose is intent on depicting the realities of the AIDS crisis, especially for those hit the hardest. Over dinner in an upcoming episode, Blanca gives an impassioned speech to her family as she reiterates the importance of safe sex. “You boys are young, black, gay, and poor. This world despises you. You get this disease, you die. They feel relieved that you’re getting what you deserve.” It’s one of the many scenes that I had to pause in order to catch my breath. (Most of the others were due to Porter’s powerful, Emmy-worthy performance.)

But Pose is also intent on finding balance, on making sure there are lively moments full of hope. It celebrates the importance of community at every turn. When Blanca is concerned that medication (such as AZT) isn’t affordable, Nurse Judy (Sandra Bernhard) explains that “there are folks in our community who care about the less fortunate.” Some wealthy queens, knowing their time is almost up, leave their meds to be given to those who can’t afford it. They understand, as most queer people do, that they have to take care of each other because the outside world won’t.

And of course, there are still ball scenes in every episode—beautiful, sprawling, thrilling and inventive. Just the costumes alone are worth the watch. Optimism still permeates—from Angel’s modeling career and a budding romance to Blanca’s budding nail salon business. And Pose still has its eyes set on queer revolution; it understands that this revolution hinges on fighting for your life. 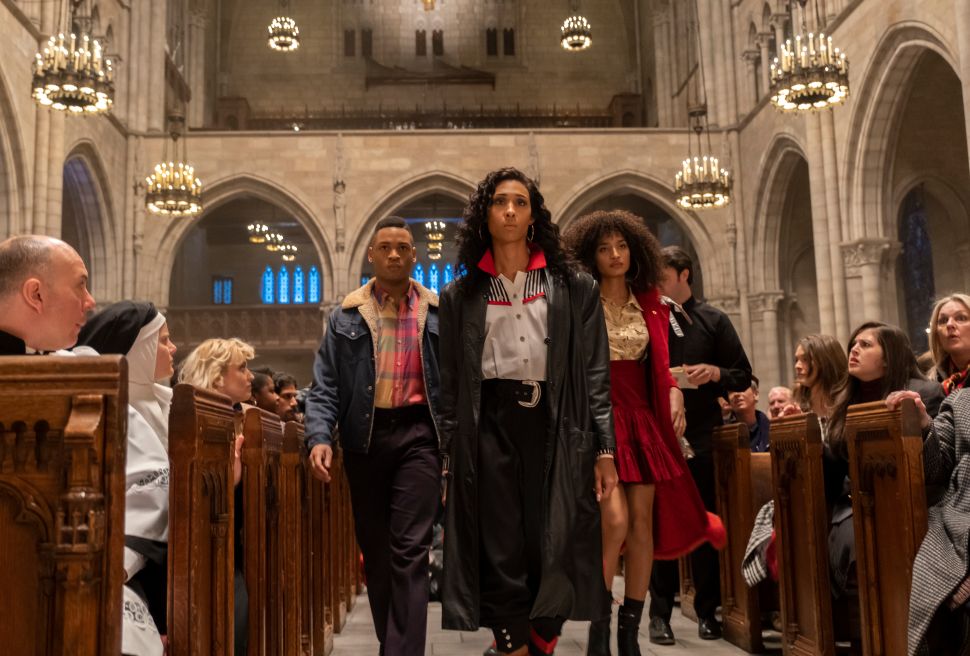