When it premiered 12 years ago at Lincoln Center Theater, Christopher Shinn’s politically tinged relationship drama, Dying City, boasted a technical coup. Over the course of its 90 minutes, the set—representing a New York apartment—revolved with infinitesimal slowness, turning so gradually that the eye could barely follow. Twenty minutes in, you wondered, Did that couch move three feet to the right?! Designer Dane Laffrey does not replicate the trick with the play’s revival at Second Stage Theatre. Instead, we see a sparse one-bedroom with a greenish sectional center stage, books stacked on the floor and a TV in the corner. Did I miss the micro-revolve? Not too much, even if writer-director Shinn’s character study suffers from internal inertia.

In the years immediately after September 11 and the seemingly inevitable yet still infuriating invasion of Iraq, Dying City played like an urgent mental check of the nation. While a fraction of the population was fighting in the Middle East, the vast majority were laughing with Jon Stewart on Comedy Central. Using evocative, subtle dialogue and not-so-subtle plotting, Shinn weaves together three perspectives to excavate the psychic turmoil of that strange, nightmarish time, making carnage half a world away resonate in our living rooms.

It’s 2005 and we’re in an apartment soon to be vacated by Kelly (Mary Elizabeth Winstead), a warm, down-to-earth therapist grieving her husband, Craig (Colin Woodell). He signed up for military service and died a year ago in Iraq. We’ll meet Craig—and his demons—in due course, but first, enter Peter (Woodell, again), Craig’s identical-twin brother. Peter may be a dead ringer for Craig, but his life turned out different. He’s gay, for one thing, but he also enjoys a rising career as a hunky film and stage actor. When the play begins, Peter has abandoned a production of Long Day’s Journey Into Night during intermission, after a co-star whispered a homophobic remark to him onstage. Self-absorbed, needy and impulsive, Peter is exactly the sort of person Kelly doesn’t need ripping off her emotional bandages, yet here he is, buzzing at her door.

The story unfolds in flashbacks, with Shinn creating various semi-plausible ways to get Peter offstage (phone call, bathroom break) so Woodell can change shirts and reenter as Craig. You get used to the convention; the back-and-forth temporal approach lets Shinn fill in the back stories for the two brothers as well as Kelly and Craig’s marriage. The boys had an abusive Vietnam War vet father stricken with PTSD; Peter seems to have sex-addiction issues; Craig also cheats, and has violent tendencies. With Kelly relegated to polite sounding board through pretty much all of this, the drama starts to sag under the weight of telling-not-showing, and you wish Kelly could have more agency in the action.

One key argument between Kelly and Craig strains credulity. He has signed up for service, and will leave for boot camp in Georgia soon. One night, with a drunken Peter passed out in the bedroom, husband and wife suddenly realize they’re on opposing sides about the reasons for invading Iraq. Even for a couple with trust issues, this seems a bit much, a forced injection of politics into relationship drama. The night that Peter shows up at Kelly’s door, he has a clutch of printed emails, which Craig sent from the front lines; the climax of the play comes when Peter reads these bleakly poetic dispatches from a deteriorating mind, and Kelly realizes the extent to which she never knew her own lover.

I’m glad that Shinn wants to map the ways our social selves interact with inherited trauma and culture’s dominant mythologies. But the combination of high emotional stakes and contrived dramatic release skirts close to melodrama. The charismatic and poised Winstead (Fargo, 10 Cloverfield Lane) is convincing as a caring psychologist with blind spots regarding her own life. The film star’s thoughtful, low-key style fits her material, for the most part. In the more angsty dual role, Woodell is effective, if a little bland. Shinn directs his script with focus and clarity. For all the production’s integrity and gravitas, I found my mind wandering to another play running a few blocks away. Arthur Miller’s All My Sons has some curious echoes in Dying City. Both are overshadowed by a brother who committed suicide during a war, both plots turn on angry confessions delivered by letter, and there’s a grieving woman caught between brothers, trying to get own with her life. The moral? Every American war gets the living-room tragedy it deserves. 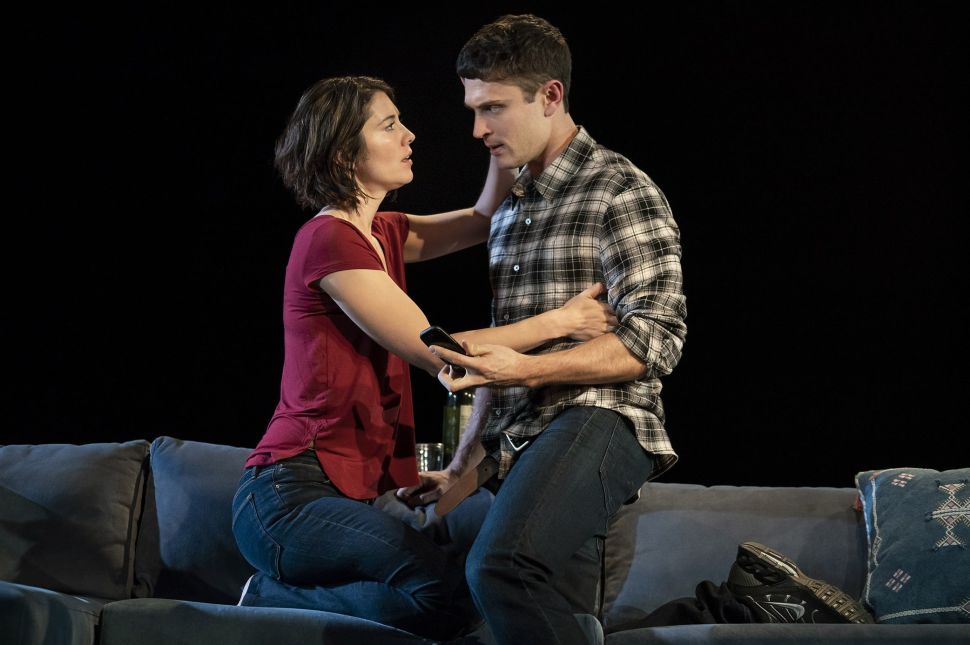