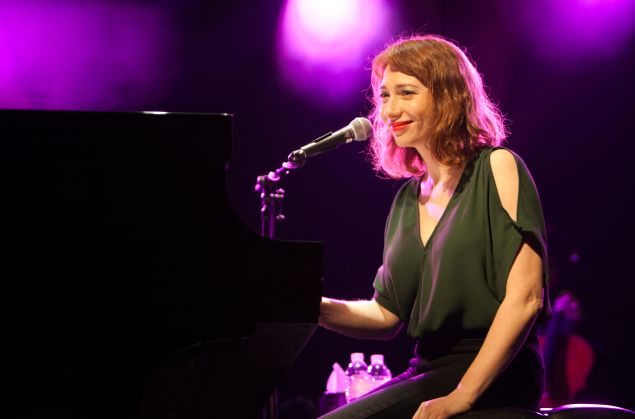 Once upon a time, a pop star on Broadway signaled something gone wrong: a career on the skids, or an ill-advised bid for legitimacy. Donny Osmond mugging away as dastardly Gaston in Beauty and the Beast. Deborah Cox ducking rotten tomatoes in Frank Wildhorn’s craptastic Jekyll & Hyde. Madonna greeted by yawns in David Mamet’s Speed-the-Plow. But today, you’re more likely to see Sara Bareilles step into her own show (Waitress) to goose box office, or Josh Groban proving his acting chops in Natasha, Pierre & the Great Comet of 1812. Now it’s Regina Spektor’s turn in the spotlight. No, the singer-songwriter hasn’t composed a musical and she’s not gigging in a show (Hadestown?!). From June 20-26, the whimsical, dark, beguiling Spektor will in appear in concert at the Lunt-Fontanne Theatre.

Since 2001, Spektor has released seven albums that showcase her unique lyrical and vocal gifts: song that twist your heart around her little finger before flicking it away. In a smoky pop soprano that careens between wise-little-girl and oracular gypsy, Spektor sings of rusting statues, poor little rich boys, cleavage in summer, rowboats trapped in paintings, or ominous allegories about the New World (“The Trapper and the Furrier” from 2016’s Remember Us to Life). Buoyed by bouncy, earwormy tracks such as “Fidelity” and “Samson,” her profile got a national bump from her driving theme song, “You’ve Got Time,” for Orange Is the New Black. (Netflix recently released a promo for the farewell season in which the cast recites her wistful lyrics.)

Born in Moscow, Spektor emigrated to the U.S. with her parents at the age of nine as religious and political refugees. By that time, she was already two years into her piano training. When her family settled in the Bronx, Spektor’s musical education continued, taking her to SUNY Purchase, then to Manhattan open mics and bars where she honed her songcraft. Her best works are mini-masterpieces of melodic sleight-of-hand, kaleidoscopic lyrics that evoke crushing loss and impish hope in the same breath. Observer talked to Spektor about Broadway, jukebox musicals and her very own street in the Bronx.

One of my fondest associations with your music is listening to Soviet Kitsch while walking around St. Petersburg. Perfect match of iPod to locale. It was 2005.
Oh, so it was even before I got to go back for the first time!

And here’s another first, your Broadway debut! Are you a Broadway fan?
I have to say, as a kid I didn’t really go to shows. That has more to do with my immigrant peeps in general. I’ve been polling people because I’ve been curious about it. First of all, Broadway is a very expensive habit to have. For some immigrants, that makes it not affordable. It’s also a very, very American tradition. So it takes people a while to get into it, culturally.

My exposure to Broadway musicals came through Christmas specials with Danny Kaye or Bing Crosby in White Christmas. One summer my mom took a job as musical director of a camp. So my little brother and I could get out of the Bronx for the summer, get some nature in us. And we did that musical, oh, what was it? It has, “Whatever Lola wants, Lola gets.”

Damn Yankees.
Yeah, Damn Yankees. I played the wife, and had that song, “Six Months.” I couldn’t relate to the character because I didn’t know about baseball season. And of course I saw Disney musicals: The Little Mermaid and Aladdin. I definitely came at it from the movie side more than the stage side. And then as a grown-up, Hamilton blew my mind, like everybody else’s mind. And my mind is still thoroughly blown by that musical. I found it very inspiring.

I bet you’d like Sondheim.
Actually, I’ve been getting into Sondheim. I’m still discovering a lot of things.

With Sondheim, there’s this spiky emotional terrain, passion that turns on a dime into detachment, which I often feel with your songs.
I just listened to this amazing talk Sondheim gave at the 92nd Street Y in the ’70s, which they just put online. Anyone who’s interested in songs and songwriting should listen. But it’s very much about theater. So a lot of his philosophy and rules have to do with songs for a musical rather than just songs as songs. Dylan would not fall under what he’s talking about.

So your songs, in three or five minutes, can just shatter your heart. Not to overshare, but “Firewood” from What We Saw From the Cheap Seats, makes me cry every time. Do you have people telling you your songs affected their lives?
Yeah, I do. You work, work, work. You feel you’re getting somewhere, and then inevitably you start to feel like, “Oh, my art sucks. I suck.” And then I will get these messages sent to somebody on my team. And they’ll say, “Can you pass this to Regina.” Or sometimes physical letters. Or people stopping me and saying it in person. But it’s so precious. And very encouraging. Because it makes you think, “OK, it’s been useful to somebody.” It’s comforting when you’re dealing in the abstract. Which is what art is: Doing these strange things that are very much abstracted, and you feel them deeply. It’s really wonderful when you realize, somebody said that you got them through that really hard time in their life. Or, they played that as they walked down the aisle. Or when their grandfather passed away, they played this song over and over and over.

Has any producer suggested making a jukebox musical out of your catalogue? Like they’ve done for Carole King and Cher?
It’s funny. I’ve had those ideas before. But I would want to write a new kind of project. Since I love being able to produce things myself, I probably would have to do it myself. And it would have to be a movie, so that I could record all the music in the studio.

So no Mamma Mia! on the horizon.
I get really strong feelings about how I want things done. How I see the context of the songs. Like I love that “Firewood” isn’t some link to a scene in something. Then it’s like, “Oh, that’s Uncle Gary’s song.” It feels hard to impose things onto the songs, because they seem to just really want to be free.

For the Broadway engagement, you’ll be playing piano, naturally. Will there be a string accompaniment, or orchestra with you?
Yeah, it’s me on piano. There’s gonna be my drummer and percussionist, Mathias Künzli. Brad Whiteley on keyboards. And then there’s going to be a cellist, a violinist, and a violist. They’re all musicians I’ve played with before. And then there’s going to be special guests. I’m doing a collaboration with a really amazing tap dancer named Caleb Teicher. One of the dances is going to be a partner dance with two dancers. And a lot of new video and lighting elements, that I’ve never experimented with before. So there’s a lot of newness to this.

With the black humor and fatalism in your lyrics, I hear Russian literature. Like Mikhail Bulgakov, Gogol, maybe even Dostoyevsky. Are these writers in your head?
Russian literature, especially in the 19th and 20th century, was just so, so potent. And the arts in general from that time. Literature and classical music. It’s such a soulful place. And in a lot of ways, a mysterious place. As somebody who came from Russia, I always wondered why it was such a bogeyman of the world. I think some of that might have to do with the fact that it’s so vast and mysterious and volatile. And it’s passionate, it could be really brutal, could be extraordinarily loyal and loving. And it’s just so many things all in one. And of course the literature reflects it. And even more so, parallel to the literature is the poetry. Well you know, Pushkin is in his own category the same way as Shakespeare. He’s the architect of the language itself. Like Shakespeare helped to build English, Pushkin helped build modern Russian.

Last month you had a street named after you, part of the Bronx Walk of Fame?
Yeah. I am the Bronxiest, Bronxy girl you’ve ever met. It was such a cool thing, the whole process of going to The Bronx Ball and listening to everybody speak. And watching wonderful activists get honored and say their beautiful words. I was flooded with memories of showing up to the Bronx, not knowing English. My piano teacher Sonia Vargas and her husband Sam, they lived just up the hill from us in the Bronx. They gifted me my music education completely. And she passed away in November. But it was so special to have Sam there. And, in the borough of the Bronx, to officially thank him for their kindness. They embodied the spirit I found in the Bronx, which is people helping people. A really loving, vibrant, diverse community.

So what’s your street?
It’s at 161st and Grand Concourse, and it’s going to be there for a year. And then it just gets moved down. But they said it stays on the Grand Concourse in perpetuity, or until the zombie apocalypse. So, it’s not gonna go anywhere. 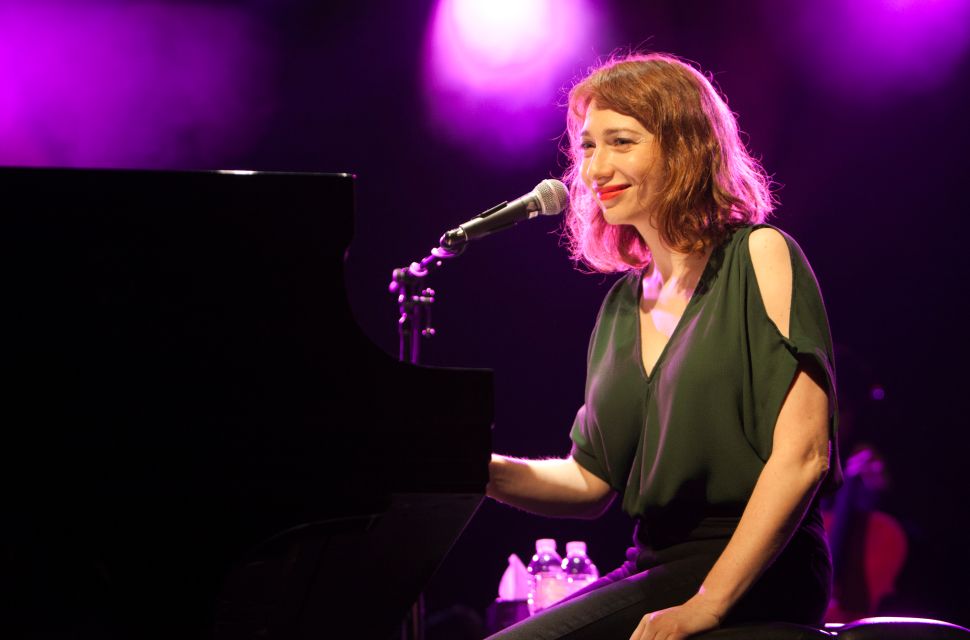