The day drinking segments on Late Night with Seth Meyers are consistently excellent. You get the loose, fratty energy of a college tailgate on a sunny afternoon (or so I assume, since I went to college in New York City) mixed with the charged environment that only gets generated when two incredibly famous people are in a room together. A couple of months ago, Meyers deployed this formula to great effect when he mixed cocktails and shot the shit with none other than American culinary heroine Ina Garten, but on Thursday, the host had the honor of railing beers with pop goddess Rihanna.

SEE ALSO: Rihanna Opens Up to Sarah Paulson About Having Kids

First of all, it’s pretty funny how genius and to-the-point this segment is. On other late night shows, like Graham Norton’s program, the host does happen to partake in minimal libations, but the rest of the guests are left to banter in front of that pesky studio audience. Meyers’s causal day drinking also brings to mind another late night host: Jimmy Fallon, who’s been known to get absolutely plastered when he’s off the clock but (it seems) would never expose the breadth of his heavy drinking habit to a camera.

In the Seth Meyers universe, the new trend of mindful quasi-sobriety is nowhere to be seen. The host and Rihanna immediately get down to business, taking shots (while looking each other dead in the eyes, obviously) and chasing the liquor with beer. Seth is obviously so nervous he chugs the beer in one go. Rihanna, of course, is perfect, and spends the entire segment treating Seth with a mixture of mild flirtatious derision and total disbelief. There’s one particularly good bit in which he tests out some pick-up lines on one of the most beautiful women in the world; predictably, they fall flat. “What’s a nice boy like me doing in the big city without his parents?” Meyers asks. Rihanna is so horrified she can only blink.

Rihanna has the best line of the segment, though. “I want to blow my wife away with, like, a romantic night out,” Meyers says. “What do I do?” “You said it,” Rihanna answers. “Blow your wife.” 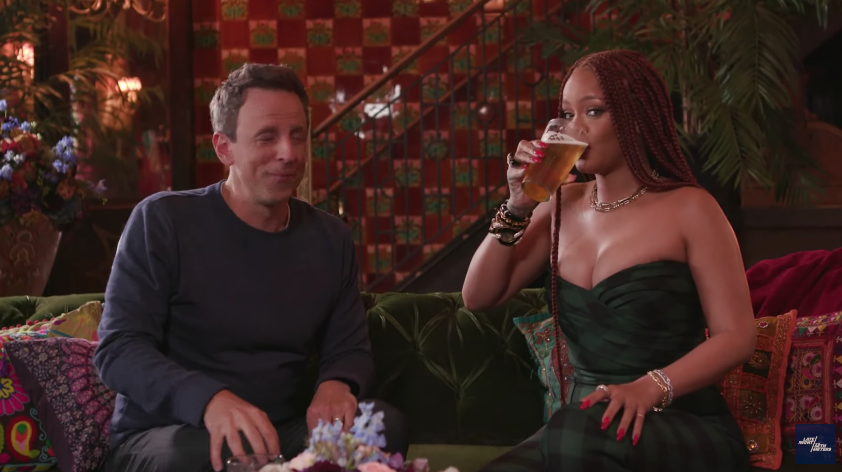