The first thing you see on entering the Delacorte Theater is a great big sign that reads STACEY ABRAMS 2020, hung on the side of a mansion. If you aren’t already excited for a new summer of Shakespeare in the Park, that should put a smile on your face. Although the inspiring Georgia Democrat hasn’t announced a run for the White House, we can still dream. Just so, director Kenny Leon and a lovable, fierce, all-African American cast has dreamed their way into Much Ado About Nothing, making Shakespeare’s zesty rom-com their own, and thereby delivering it to us fresher and funnier than I can remember in ages.

At the top of this translation lyrics from Marvin Gaye’s “What’s Going On?” get pride of place. Danielle Brooks, playing the strong-willed singleton Beatrice, enters one fine morning and sings the plaintive 1971 ballad to friends and relatives gathered on the patio below. It’s a somber note to begin a frothy comedy, but suits a story that mingles melancholy with giddiness, misogyny with romantic idealism, and patriarchal privilege with women as agents of social justice.

This Much Ado takes place in a world, like ours, where folks are being killed for Driving While Black. Don Pedro (Billy Eugene Jones) has been transformed from a 16th-century Sicilian aristocrat to the leader of a Black Lives Matter militia in the American South, which marches in formation holding signs of protest. Pedro and his soldiers arrive at the estate of the wealthy lord Leonato (Chuck Cooper, benignly in charge), whose daughter Hero (Margaret Odette) catches the eye of dashing young Claudio (Jeremie Harris). Another man in Pedro’s service, the swaggering braggart Benedick (Grantham Coleman) resumes his “merry war” with Leonato’s niece Beatrice, an ongoing exchange of verbal insults and hearty disdain for marriage.

With classic Shakespearean symmetry, the plot is driven by two deception schemes, one playful and positive, the other hateful and toxic. In the former, Pedro and his friends conspire to make Beatrice and Benedick think, separately, that each is in love with the other (staging fake gossip for them to overhear). Once the seed has been planted, our quarreling non-lovers fall hard and fast. The other deception hinges on the sexist assumption that women are whores, commonsense in the Bard’s time but problematic today. Pedro’s malignant brother, Don John (Hubert Point-Du Jour), accuses Hero of slutty behavior to Claudio’s face, and invites him and Don Pedro to see evidence. A henchman of John’s makes love to one of Hero’s servants under the cover of darkness, thus fooling Claudio into thinking his love untrue.

When Claudio publicly humiliates Hero on the day of their wedding, branding her as faithless and throwing the sobbing girl to the ground, Shakespeare sets a mighty big obstacle to turning this sour tale into one of forgiveness and love. Director Leon and the cast handle this tricky material with terrific, bone-deep honesty. As the falsely accused Hero, Odette doesn’t take it passively, but pants and moans, wrought up with panic and rage, ready to tear somebody’s head off. Inasmuch as a woman can have agency in this situation, or at least portray a good, strong woman done wrong, Odette does it beautifully.

Brooks is no less powerful, a comic dynamo of the first order easily handling the verbal and slapstick demands of the role. As she overhears her girlfriends chatting about how Benedick is besotted with her, the Orange Is the New Black actor dashes hilariously up and down the audience, sitting on laps, under laps, rolling commando-style on the grass for surveillance purposes. She looks stunning in Emilio Sosa’s modified-modern frocks, and that rich, velvety voice makes you swoon (in case you missed her equally impressive work in The Color Purple).

I can’t remember a Shakespeare production were every role seemed cast with such evident care and purpose, when the bench was this deep. Coleman’s Benedick transforms amusingly from lady-dissing playa to lovestruck troubadour (trying to recreate one of Jason Michael Webb’s catchy, original tunes on guitar). Jones’ Pedro is robust yet brooding, a more nuanced and sympathetic portrayal than you usually see. Even Tyrone Mitchell Henderson’s quick-thinking Friar Francis has a moral urgency and wit lacking in most renditions. It’s true, the scenes with the incompetent police officer Dogberry (Lateefah Holder) could be funnier (they always can), but at least she speeds through them with officious rapidity.

Leon directs the entire affair with abundant flair and a great ear for the music of the original text—as well as finding places to insert more contemporary tunes: the Gaye, the gospel hymn “Precious Lord,” bass-heavy, bleacher-shaking party jams, love songs, and a soulful, aching rendition of “God Bless America.” This is how Shakespeare in the Park should be. What’s going on? Brooks asks. The best outdoor party around. 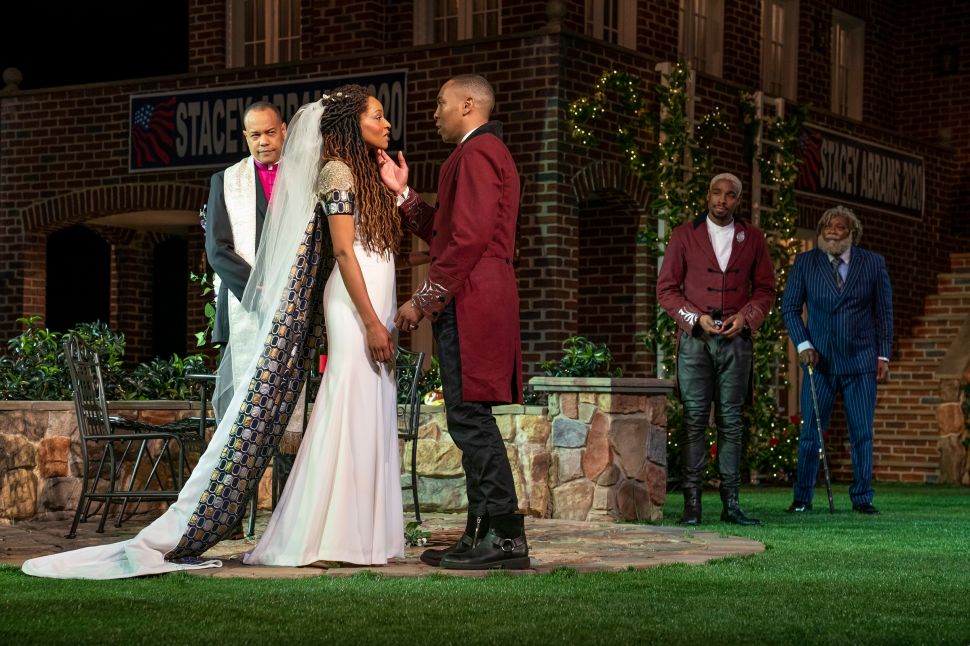