Everything about the Stonewall Inn was messy: in the summer of 1969 the now-legendary dive bar on Christopher Street lacked such basic amenities as running , fire exits, functioning toilets or even a liquor license. The dump was a cash cow for the Genovese crime family, who kept it afloat via regular cash bribes to the cops.

And the customers were no more “upscale” than the venue: not so much the chichi East 50’s gay men familiar from The Boys in the Band, but a broader spectrum of drag queens, trans people, lesbians, homeless kids and queer people of color.

If the New York City Opera’s world premiere Stonewall misses some of the grittiness of the bar, it does gets exactly right the diversity of its clientele. Nowhere in the mix is there a well-coiffed interior designer spouting quips about Maria Montez. Rather, the large cast of characters ticks off just about every box of queer marginalization.

With so much ground to cover, Campbell doesn’t waste any time showing and gets started immediately with the telling: the characters don’t have arias so much as elevator speeches.

Iain Bell’s music achieves a similar level of efficiency: the opening montage sounds like what the “Tonight” ensemble might have been if West Side Story had been composed by Burt Bacharach. This is extremely user-friendly music, a style that emphasizes the characters’ charm, if not downright naiveté.

Once everyone arrived downtown at director Leonard Foglia and set designer Riccardo Hernandez’s romanticized vision of the grimy Stonewall, the opera caught its breath before the impending catastrophe. Everyone relaxes and hangs and, more to the point, dances. (The Inn was at that time the only venue in NYC where gay men could dance together.)

The revelry is accompanied by a couple of pre-recorded songs, note-perfect pastiches of late ’60s R&B pop, performed by Darlene Love with such full-voiced verve I first assumed they must be actual 50-year-old B sides.

The ensuing “riot” scene takes a brave whack at the impossible task of depicting the almost random series of events that began with a police raid on the bar. Bell merges spoken chants, bits of brassy soundtrack-type chatter and heldentenor hectoring from the police inspector (the stentorian Marc Heller.) But what will stay in my memory is not so much the music as the astonishing fight choreography by Rick and Christian Sordelet, close to a quarter hour of sleek chaos.

In the finale of the piece, Bell and Campbell evoke the aftermath of eerie silence reported by a number of observers of the “Stonewall Uprising”—dawn breaking over an uncertain but hopeful future. I do wish that the ensemble Bell wrote ventured a little farther away from its obvious model, Leonard Bernstein’s “Make Our Garden Grow,” but the soaring vocal lines fill out the template handsomely. (The alert and sympathetic conductor was Carolyn Kuan.)

Heading a superb cast was Lisa Chavez as the tough Maggie, flinging out compact mezzo tone like fists. Andrew Bidlack (Andy) and Jessica Fishenfeld (as the “lipstick” lesbian Leah) triumphed with daunting leaps to difficult high notes. The casting of trans man Liz Bouk as the trans woman Sarah would be plenty interesting enough for political reasons, but his shimmering alto also provided a lovely moment of repose in an otherwise skittish opera.

“Stonewall,” the event or the uprising or whatever you call it, famously gained significance in retrospect, or, to put it another way, nobody realized its importance when it was actually happening. I do hope the same will not have to be said about Stonewall, the opera: Saturday afternoon’s invigorating performance played to a half-empty Rose Theater of Jazz at Lincoln Center. 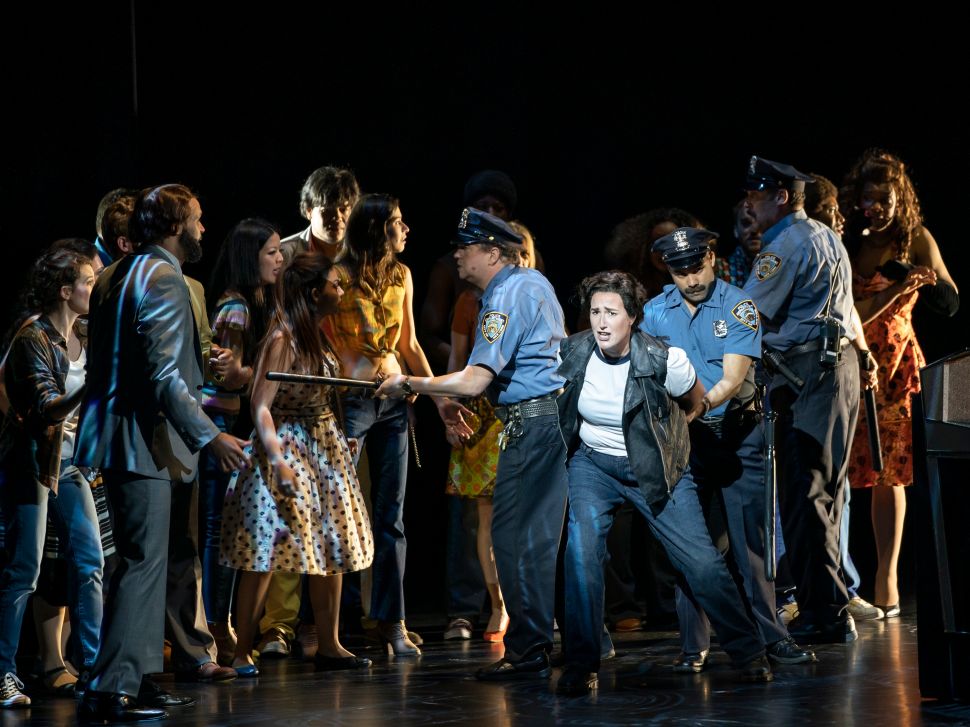